Building for the IoT with M2M One and M2M Connectivity

I stumbled upon one IoT company in particular whilst at YOW! Connected last year — M2M One and M2M Connectivity. They provide IoT connectivity and hardware services that could really benefit developers. James from M2M One and Bill from M2M Connectivity were kind enough to take the time to answer a few questions about what they do and the advice they have for the Internet of Things.

Can you tell us a bit about M2M One & M2M Connectivity and how your companies are involved in the IoT and other emerging tech?

M2M Connectivity and M2M One

James (M2M One): M2M One provide access, support and specialist networking for M2M/IoT devices using mobile networks – In Australia we use the Telstra network, and in New Zealand we use SPARK. Our goal is to make connecting your wireless device to a cellular network quick, painless and  cost-effective.

What makes dealing with us different to dealing with a Telco directly is that all we do is M2M/IoT – we don’t sell handsets, tablets, or friends and family plans. Typically, most remote devices use tiny amounts of data (although this is changing), so we take data plans and chop them up. Essentially, what this means is that people only pay for what they use.

For example, if you’re running a smart meter, you would typically use 100KB of data a month. So, instead of buying a retail plan for, say, 150MB of data, we sell you just the 100KB you use.
We also provide a range of tools for managing your SIM cards in real time online, letting you activate SIMs, diagnose and monitor your connection to the mobile network on demand.

Bill (M2M Connectivity): M2M Connectivity focuses on hardware – we support and distribute products from a range of global manufacturers specifically for M2M/IoT use.

Where M2M One is focused on cellular, we support all kinds of technologies. We have hardware for Bluetooth, Zigbee, Wi-Fi, cellular and satellite… we’re even starting to support LoRA & Sigfox networks too.

Our goal is to help people who want to build solutions using these technologies. We don’t sell finished solutions, but we sell everything people need to build their own product.

What sort of IoT developers is Libelium’s IoT range targeted towards?

Bill (M2M Connectivity): Libelium designs and manufactures hardware and software development kits (SDK) for wireless sensor networks, so that system integrators, engineering, and consultancy companies can deliver IoT, M2M, and Smart Cities solutions with minimum time to market. You can find them on the Libelium website.

James (M2M One): I really like their range of products called Cooking Hacks. These are aimed at developers who want to get started with a range of sensors and connectivity options. They have some great guides on the website, and even sort the kit by difficulty level so you know where to get started. The robot kit is particularly cool, especially if you’ve always dreamed of having your own sumo robots. 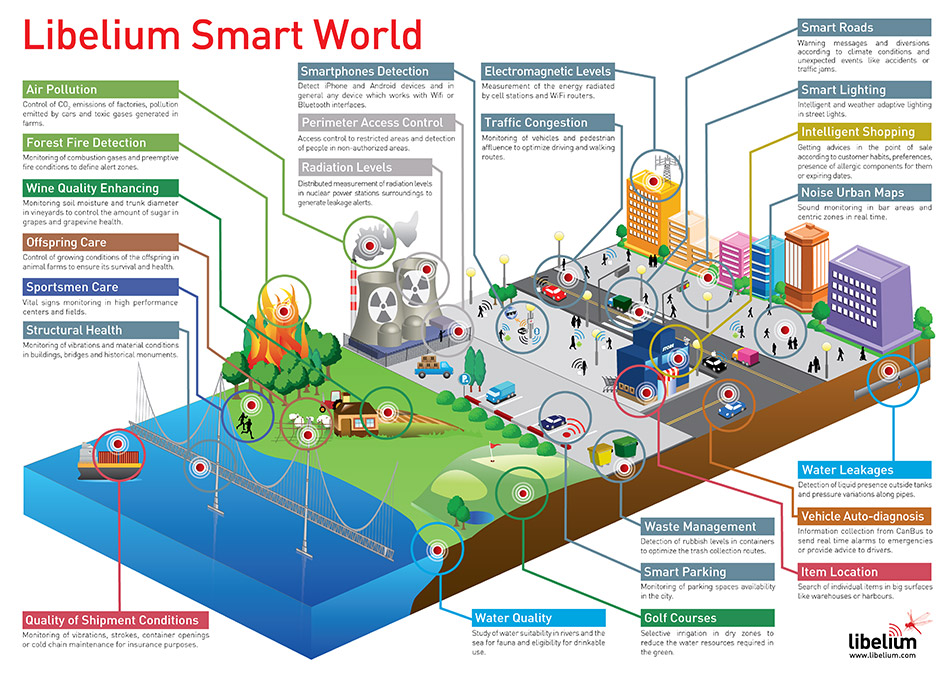 For someone who is keen to get into building for the IoT, where would you recommend they start?

James (M2M One): I think it really depends on your experience level, but my advice for most people who just want to get an understanding of what you can do with sensors and remote communications is to grab something, and start playing. It’s pretty easy to build something for under $100 with a couple of inputs and communications to start experimenting. If you’re looking for ideas there are a bunch of developer kits on the M2M Connectivity site.

Many of the sensors seem to go above and beyond the typical kit (a CO2 sensor, air pollutant sensor, GPS module… etc), what are your favourite examples of how developers have used some of the more advanced sensors?

Bill (M2M Connectivity): More advanced sensors can mean different things to different applications. A trend teller IoT node might just be equipped with a sensor with good power consumption performance rather than high accuracy. An observation point for regulatory purpose might need to provide highly accurate and reliable readings. My standard for favourite or “good examples” of IoT are those which achieve good balance between physical restrictions (i.e. power) and requirements.

The IoT is often criticised for lacking imagination and potential. Developers tell me everything has already been done. This is clearly not true, and I know James is passionate about the IoT’s potential for positive impacts on society — what advice would you give to developers in this area?

James (M2M One): If you’re looking at building this into a business, my biggest recommendation would be focusing on business or social problems that people are trying to solve and work backwards. I’d say this applies to around 90% of the successful use cases in IoT… sometimes people just get lucky, but it’s normally about solving a problem.

The biggest failures we see are people trying to make a business out of a product that doesn’t really address a problem, or the problem they are addressing isn’t in proportion to the cost of the solution.

I feel that everything I could possibly want to do has been done, but then someone will come along with a new product that just blows me away.

One of my recent favourites is the combination of drones and remote communications to photograph and analyse beaches for shark detection.

Security is crucial for keeping the IoT safe to bring into homes, cities and businesses, do you have any thoughts on where security and the IoT are headed? Does M2M have any particular way they handle the security side of things?

Bill (M2M Connectivity): IoT security is quite a popular topic. However, (especially on the portal side), IoT basically overlaps with the security of Internet. Most of the interface of portals require HTTPS/SSL with authentication key header field or body field.

On the sensor’s RF side, there might be more space to adjust according to power consumption, processing power, or system complexity.

Overall, the trend is that IoT application developers no longer need to invent this part and just adopt the security required. For example, if the wireless bearer is chosen as LoRaWAN, LoRaWAN already defines security from baseband to application level.

James (M2M One): On the cellular side of things, most of our customers encrypt their traffic before sending it across the network. For customers that are highly security-conscious we build them their own private network. The concerns we see are less about interception of data, and more about using remote access or control systems as backdoors.  We try to stress to every single customer that they should be using strong authentication, identity management and firewalling to protect their remote devices. The most common issues we see are around people using public IPV4 addressing to remote in to their devices – if you can access your device over the public internet, so can everyone else.

Any final thoughts or words of advice for people keen on building things for the IoT?

Bill (M2M Connectivity): IoT is ambitious, so… use good tools!

James (M2M One): IoT is a collaborative technology/industry – no one has all the answers. Make sure you experiment lots, attend local meet-ups, and listen out for problems people are trying to solve… It might just help you come up with the next big thing!

Dev Diner Interview Building for the IoT | M2M One Australia

[…] Read the full interview over at Dev Diner – http://devdiner.com/interviews/building-iot-with-m2m-one-m2m-connectivity […]

[…] Read our interview with Patrick Canzariti of Dev Diner on all things IoT and M2M: http://devdiner.com/interviews/building-iot-with-m2m-one-m2m-connectivity […]

Using AR and IoT to create a killer app? | M2M One Australia

[…] While some of this may still sound a bit “pie in the sky” the technology is here now and available to create solutions like this. Hardware to make this more effective like AR glasses and more elegant overlays than tablets will slowly come down in price but you could make something functional with a basic Android tablet and small sensor network and a raspberry pi or other low cost board for under $100 at volume – Myself and Bill Zhou from M2M Connectivity recently spoke to Dev Diner about creating a low cost IoT solution (Read the full interview at Dev Diner) […]