Are we living in a simulation?

With all of the technological advancements emerging today, could we one day simulate a universe complete with consciousness? If so, are we already living in that universe? Here are the arguments put forth so far for the fascinating question — are we living in a simulation? 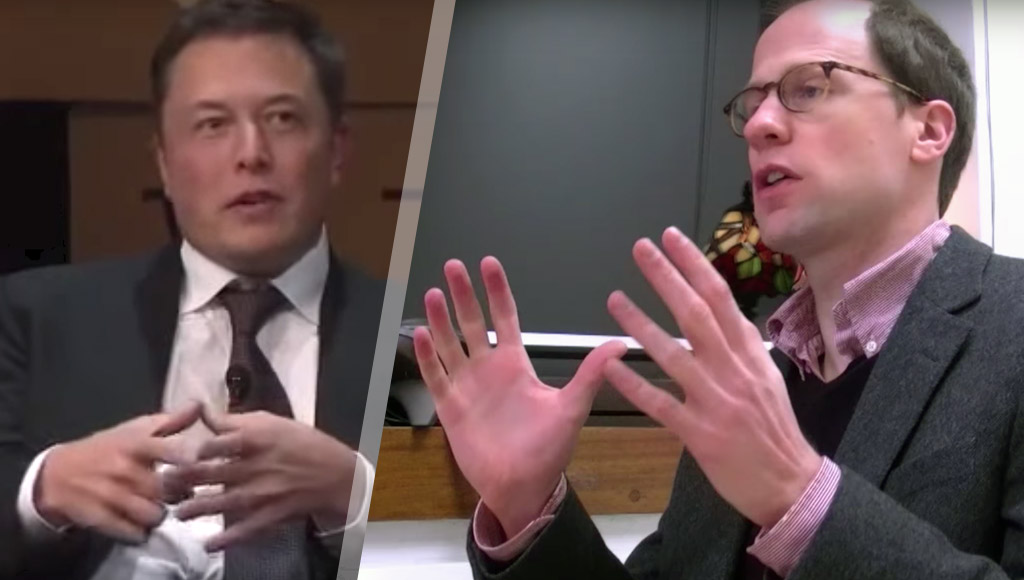 If one thing is for certain, explaining simulation theory requires hand gestures

When exploring this question, one of the first things mentioned is a concept put together by Philosopher Nick Bostrom. He proposed “the simulation argument” in which “one of three unlikely-seeming propositions is almost certainly true”:

“I don’t think we have very strong evidence for, or against, either one of them and therefore we should maybe distribute our credence more or less evenly between them.” — Nick Bostrom

Nick finds this argument an interesting and different way to approach this sort of question. He says that rather than saying “prove that the external world exists” or “prove to me that I’m not dreaming”, we aren’t trying to prove beyond a reasonable doubt that the external world really exists with this argument. Instead, it begins with the concept that our physical world does exist. That all those wonderful things we’ve discovered through science and technology are true and instead look at what would be possible with our own societal advances.

The most common argument for us living in a simulation has been said over and over again by Elon Musk and others. We’ve already advanced quickly when it comes to video games and virtual worlds within those. Assuming we keep advancing, surely we’ll reach the level of accurate and complex simulations eventually. If that’s the case, the chance that we are in one of those simulations, rather than being the first one would be quite high, right?

“If you extrapolate into the future and say, ‘well how good will video games be in 100 or 200 years from now?’ and if there’s continued improvement […] it becomes beyond a certain resolution indistinctguishable from reality. There are likely to be millions, maybe billions of such simulations. What are the odds that we’re actually in base reality? Isn’t it one in billions?” — Elon Musk

Rich Terrile, a scientist at Nasa’s Jet Propulsion Laboratory, believes that one sign that this could indeed be a simulation is the fact that our universe appears to behave mathematically to a set series of rules. It also appears to be broken up into pieces (e.g. subatomic particles) and aspects which appear to have a limit to their size, allowing them to be simulated:

“Even things that we think of as continuous — time, energy, space, volume — all have a finite limit to their size. If that’s the case, then our universe is both computable and finite. Those properties allow the universe to be simulated” — Rich Terrile

Max Tegmark, an astrophysicist at MIT, shared this view at the 2016 Isaac Asimov Memorial Debate where he said,

“But if you look at how these quarks move around, the rules are entirely mathematical as far as we can tell. And that makes me wonder, if I were a character in a computer game, who starting asking the same kind of big questions about my game world, I would also discover eventually that the rules seemed completely rigid and mathematical. I would just be discovering the computer program in which it was written. So, that kind of begs the question: How can I be sure that this mathematical reality isn’t actually some kind of game or simulation?”

It even has a little hint of error correction, as S. James Gates points out from his research in that debate too.

“In my research I found this very strange thing […] I was driven to error-correcting codes — they’re what make browsers work. So why were they in the equations I was studying about quarks and electrons and supersymmetry?” — S. James Gates

That doesn’t prove we’re in a simulation just yet. It could just be that for any ecosystem to work, it needs built in error correction which we just see as similar to computer code because that’s the best analogy we have. It might mean nothing at all, but it’s an interesting thing to consider.

When humankind discovered that we weren’t the center of the universe, it opened up a whole range of scientific advancements once our initial incorrect assumption was put aside. Rich Terrile believes that the simulation theory could be one of those discoveries. One aspect of quantum mechanics, “the problem of measurement”, involves a range of things that are beyond this article but finds that things can only become defined/measured when they are observed by a “conscious observer”. Before that point, they exist in a sort of limbo of the possible outcomes. Could this be because it is a simulation that requires us to interact as a simulated entity with the simulated objects around us?

“For decades it’s been a problem. Scientists have bent over backwards to eliminate the idea that we need a conscious observer. Maybe the real solution is you do need a conscious entity like a conscious player of a video game” — Rich Terrile

If we’re not in a simulation, civilisation has an end date

Elon Musk points out that maybe we really want simulations to be possible… for our own good!

“There’s a one in billions chance we’re in base reality, I think it’s one in billions. We should hope that’s true because otherwise if civilization stops advancing, that could be due to some calamitous event that erases civilization, so maybe we should be hopeful this is a simulation. Otherwise, we will create simulations that are indistinguishable from reality or civilization will cease to exist. Those are the two options.” — Elon Musk

Can simulations be conscious?

S. James Gates pointed out at the 2016 Isaac Asimov Memorial Debate that for scientists, this concept of our world as a simulation is like the concept of a God for non-scientists… it’s something that might not really be able to be observed to be proven:

“I think for non-scientists, an acceptance of the simulation hypothesis as an accurate view of our universe is equivalent, I believe, to the notion of a deity… it’s that ability of us—our human ability to observe the universe that actually defines science. So, if you can’t give me something that I can observe, I don’t know how to do science.” — S. James Gates

But are things too ridiculous for this to be a simulation?

Or is that what a simulation designer would include?

“I also think sometimes some of the ridiculous things in the universe and think, really, why would that be part of the simulation? And I realized that if I was doing a simulation, I would definitely put those things in. So, there you go.” — Lisa Randall, professor of physics at Harvard at the 2016 Isaac Asimov Memorial Debate

Lisa was actually quite skeptical of the idea of us living in a simulation in the debate, but her point is shared by those who do indeed think we’re in a simulation! So many things recently have happened incredibly unexpectedly. The expected norm suddenly turned on its head. According to the New Yorker, David Chalmers, an Australian philosopher and cognitive scientist, thinks this might actually support the idea of a simulation.

“what is happening lately, [David Chalmers] says, is support for the hypothesis that we are living in a computer simulation and that something has recently gone haywire within it. The people or machines or aliens who are supposed to be running our lives are having some kind of breakdown. There’s a glitch, and we are in it.” — Adam Gopnik at the New Yorker

It’s an entertaining (or terrifying?) concept, that we could be parts of a computer simulation that are suddenly being messed with… potentially for no reason at all. Maybe for research? For fun? Or is this just our way of oddly rationalising completely logical outcomes in our world that we just didn’t see coming?

There was an interesting exchange at the 2016 Isaac Asimov Memorial Debate which I’ll include here from the transcript:

NEIL DEGRASSE TYSON: So, the turtles all the way down.

MAX TEGMARK: Turtles all the way down. And at this point, I get this sinking feeling that there’s something rotten at the core of this argument.

What do we do?

“if you’re not sure at the end of the night whether you’re actually simulated or not, my advice to you is go out there and live really interesting lives and do unexpected things so the simulators don’t get bored and shut you down.” — Max Tegmark at the 2016 Isaac Asimov Memorial Debate

Keep that in mind from now on.

If you’re keen to hear more discussion, here’s the 2016 Isaac Asimov Memorial Debate on “Is the Universe a Simulation?”: