5 questions answered about the Magic Leap One (and 2 we still need answers for!)

The mystery of Magic Leap has been partially unveiled with the announcement of the Magic Leap One headset! Brian Crecente from Rolling Stone’s Glixel got to try the tech, write about his experience and interview the founder, Rony Abovitz, about it all. There’s a lot there, so here are the questions many have been asking and the answers we have for them now! 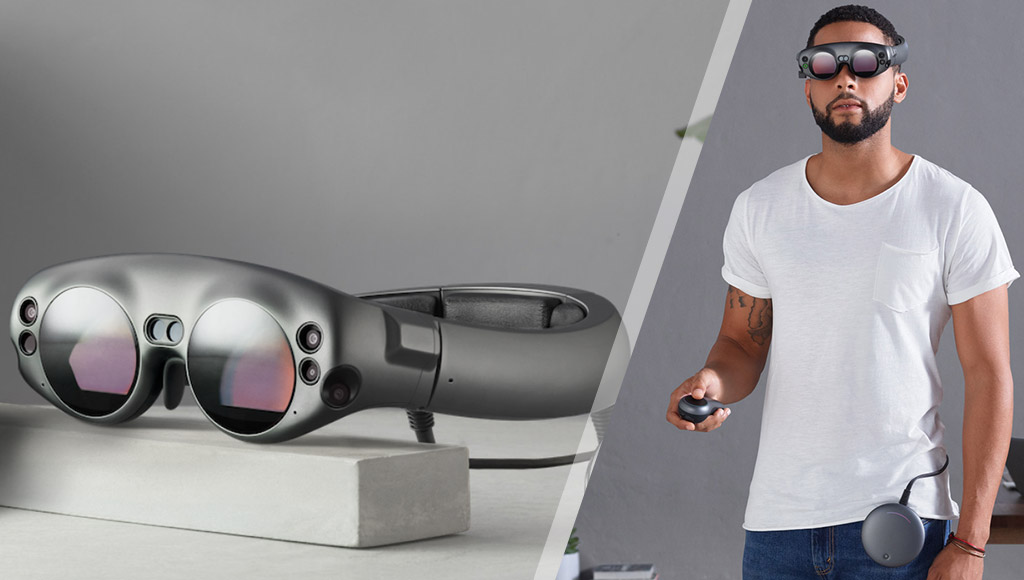 The Magic Leap One revealed!

Is it one contained headset?

It is a headset and a small portable computer connected by a cable, along with a physical controller.

“a headset and small pod-like computer connected by a single, long cable and a controller, known simply as Control” — Brian Crecente

Abovitz says it is a “self-contained computer” that is “something close to like a MacBook Pro or an Alienware PC” with “a powerful CPU and GPU”.

What can the headset itself do?

To provide audio, it has “tiny, high-end speakers built into the temples of the device”. They say that:

“the technology delivers not just a light field, but a sound field, the sort of aware stereo that can track your movements and react to make sure the audio is always coming from the object, no matter where you stand” — Brian Crecente

However, it sounds like you can also plug headphones in — “For this particular demo, the team had me put on earbuds plugged into the goggles.”

What comes in the Magic Leap One kit (Source: Magic Leap)

It does seem like it can track you to a pretty interesting degree, one demo was an interesting sneak peek into the future:

“She walked up to me, stopping a few feet away, to stand nearby. The level of detail was impressive, though I wouldn’t mistake her for a real person, there was something about her luminescence, her design, that gave her away. While she didn’t talk or react to what I was saying, she has the ability to. Instead, Miller had her on manual control, running her face through a series of emotions: smiling, angry, disgusted. I noticed that when I moved or looked around, her eyes tracked mine. The cameras inside the Lightwear was feeding her data so she could maintain eye contact. It was a little unnerving and I found myself breaking eye contact eventually, to avoid being rude.”

“This isn’t a pair of glasses with a camera on it, it’s what we think of as spatial computing. It has full awareness.” — Rony Abovitz

The best description we get is “about the size of a VHS tape held in front of you with your arms half extended”. They say it is “much larger than the HoloLens”. The FOV can be made less jarring in applications too — “developers have the option to fade the edges so that there won’t be such a harsh break where the image stops “and your brain will kind of naturally fill in the gaps for you.””.

“Field of view we think is, we’d call it workable and good for ML1, […] It is one of the things we will continue to iterate on in Magic Leap 2 and 3 and beyond. And there is sort of a point where you hit a form factor and a field of view … where you are sort of done there.” — Rony Abovitz

Does it let you have multiple focal points?

Strangely, this one we don’t have an answer for. The Rolling Stone author didn’t get to experience this in the demos he tried, he got this answer from Abovitz which is quite vague:

“Developers may create applications and experiences with characters and objects that appear correctly in space and allow a user to focus naturally on an object of interest, as they would in the real world.” — Rony Abovitz

I guess we’ll have to see on that point.

Is there a price or release date yet?

No solid details on those yet — “Abovitz also declined to give me a ship date or price. But he did say that there is no doubt that the first version will ship in 2018.”

Is it indistinguishable from reality?

Close but not quite.

“while it didn’t look indistinguishable from reality, it was close. To see the physical world around me, and then those creations appearing not on it, as if some sort of animated sticker, but in it, was startling.” — Brian Crecente

The way that the world changes when you get closer to objects sounds incredibly intriguing though (emphasis below is mine):

“The world around it still existed, but I couldn’t see through it. It was as if it had substance, volume, not at all a flat image. I was surprised to find that the closer I got to the robot, to an extent, the more detailed it became. Getting up close to the floating object didn’t expose pixels, it highlighted details I wasn’t able to see from afar. If I got too close, though, it sort of disappeared or I was suddenly inside the thing. Artifacts, I was told, of a demo that hasn’t yet been polished.”

While not indistinguishable from reality, there’s a level of realism that comes with a level of responsibility for developers. A horror experience the Magic Leap team put together didn’t go too well:

“It was terrifying, people would not go into the room anymore. It was very, very, very scary, like almost life-threateningly scary, so we kind of said, ‘OK, let’s put that aside for now’.” — Rony Abovitz

Are the pictures of the headset real or renders?

Ars Technica was quick to call the images “touched up in Photoshop”, Magic Leap clarified with them that the photos do include an actual headset:

“The photos are not renderings, and the only retouching that was done was to edit out some sensitive IP.” — Magic Leap to Ars Technica

It’ll be interesting to see what developers make of these headsets when this “Creators Edition” is released! To read the full story, check out Glixel’s piece here.