Building a 3D printed AR headset with The Triton Project

It’s always exciting to stumble upon another AR headset being developed! Graham Atlee has been putting together The Triton Project, an exciting new headset similar to Project North Star that can be put together with off-the-shelf parts! Here’s a Q&A with Graham on how it came about and how you might be able to get your hands on one!

The Triton Project so far!

1. How would you summarise The Triton Project in a few sentences for people who haven’t heard of it before?

The Triton Project is a 3D printed headset that uses off the shelf hardware to deliver immersive augmented reality.

The Triton’s mission is to help us better explore the role computer vision and web technology plays in delivering the magic of an AR experience.

2. How did it come about? Who else was there when the idea emerged? Take us to the moment of the idea and tell us the story.

Before I was heading back to college for the spring semester I had my two friends over to take a look at this prototype for an AR headset that I had been building in my basement over break. The prototype was hacked together with paper, velcro, and electric tape but the real magic occurred when I turned it on. It was at that moment my friends were like “woah dude I would totally buy this for like $400”.

I wanted to check the three of us weren’t the only people who thought this was cool, so I snapped a few photos of the prototype and shared it online and it ended up getting a lot of traction. Then it all sort of clicked for me like — ok yeah I could turn this into a real thing. The whole project just played out in my mind.

3. How does it differ from Project North Star?

The main structural difference is that the Triton uses a single screen that sits above your eye line. In terms of specs like resolution and FOV they are all about the same as the North Star. But I intend for the Triton to be easier to build as it uses all off the shelf components. Although I say that, the Triton is not about fragmentation. It’s more about diversification of open source hardware. More kits for sale from different people will help lower the cost on certain components and help increase innovation.

4. What experience did you have before embarking on creating AR headsets? What would you recommend others read up on before trying to get into making their own AR headsets? Any good resources?

Before this I had built two North Star headsets. They’re a bit tricky to assemble but it gives you novel insight how AR works from the ground up. 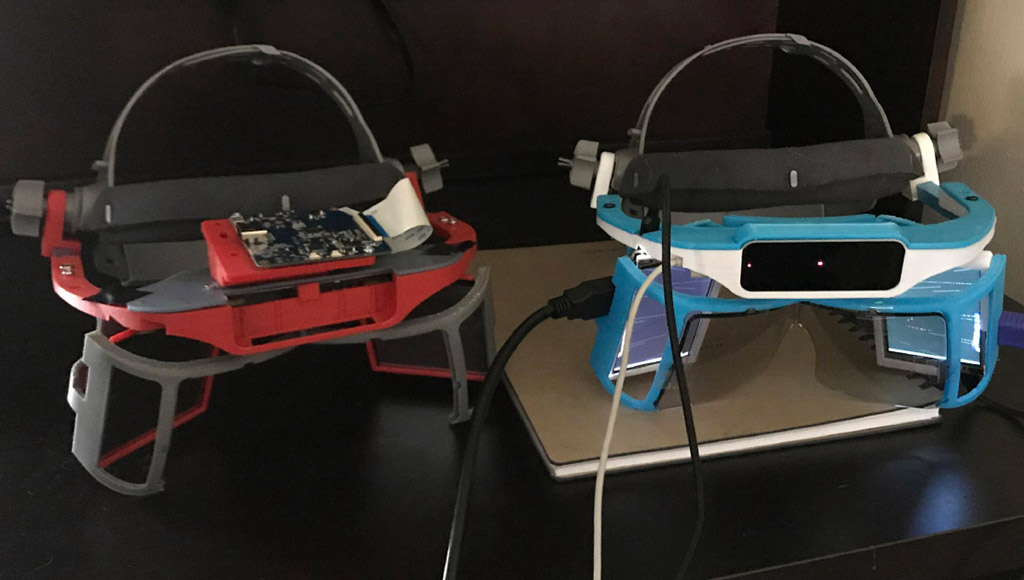 If you want to learn how to make your own AR headset I would recommend first building a North Star or soon a Triton. After that, you don’t need a fancy 3D printer or software to get started. Just use whatever is around you, like spare parts from a VR headset, some thick paper, and lots of tape. Get a concept going along with some photos and then share it within channels in the VR/AR community (Discord, Twitter, FB Groups). Also, don’t be afraid to reach out to experts in the industry as they are more willing to help than you would think.

5. How do you go about finding parts on Aliexpress and elsewhere? Any tips?

I’ve spent a ton of hours searching through Aliexpress to get the parts I was looking for. It’s really great because everything is relatively cheap. I was able to order a 2k resolution display panel for only $80 which I feel like a few years ago was unheard of. I would recommend checking out the Weiwei team on Aliexpress for display panels. My tips are to search for parts outside the U.S, be patient with the shipping time, and double check specifications (sometimes supplier listings can be unreliable, make sure to message them directly).

6. What was something that caught you by surprise? Something that didn’t quite go to plan which others might be able to learn from?

There was a bit of a learning curve when it came to 3D printing. I learned that just because something can be done in CAD doesn’t mean it’s going to translate well in the final print. While the printer is extremely accurate there’s always a small margin of error that you have to account for. I learned that it’s better to fail fast and fail cheap. 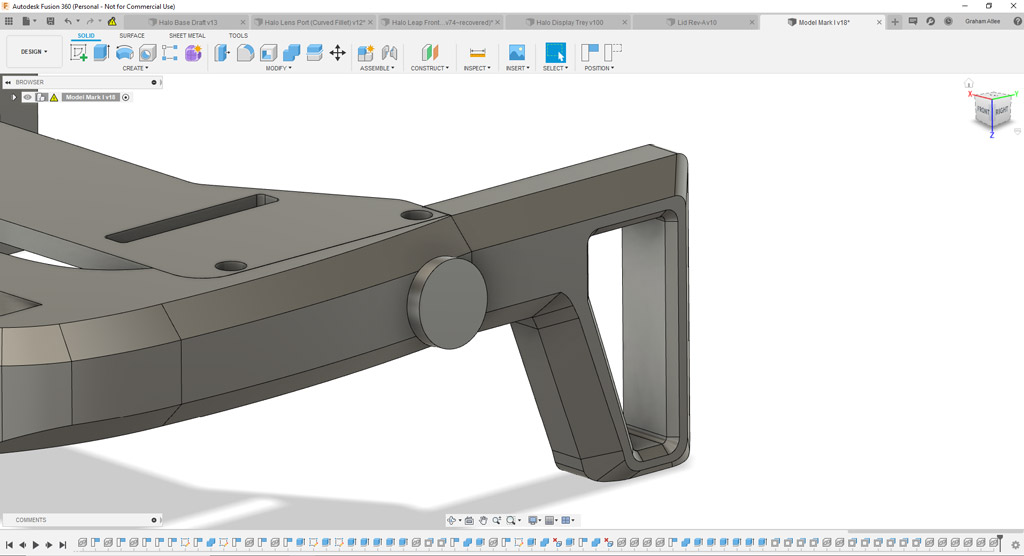 Some of Graham’s CAD designing!

That doesn’t mean you should be intimidated. The learning curve for CAD software is way faster than say learning to program. There are a ton of resources out there that will help you work your way up to whatever skill level you want to acquire.

7. What are you most happy with so far on the project?

I’m really happy with how the design aesthetic turned out. From part two of my build series you can see at the beginning it was just this thick rigid block. 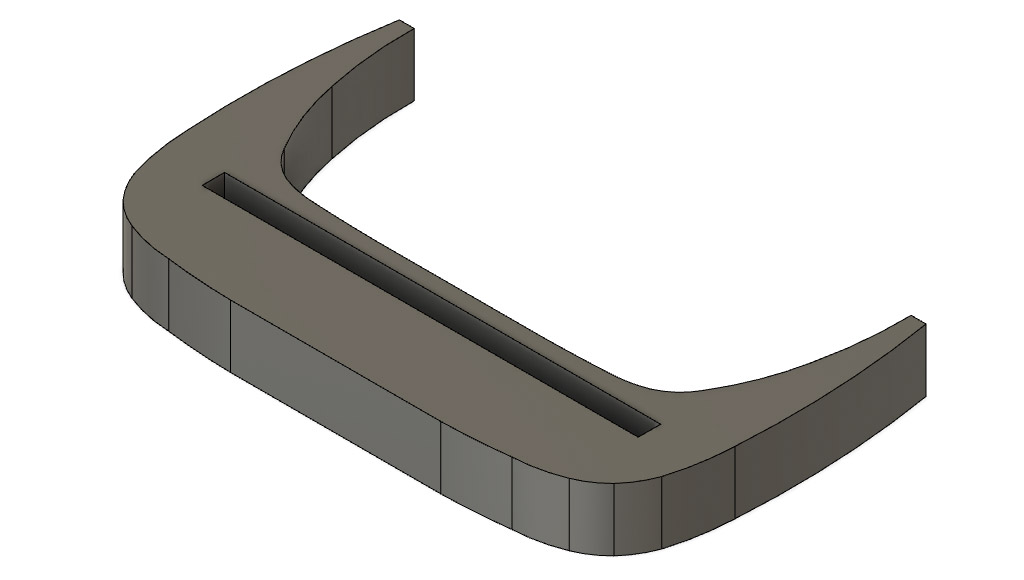 If I could think of a metaphor it was comparable to ice sculpting (not that I’ve ever ice sculpted before). You start off with this block of ice and then sort of shave it down into a work of art.

I’m also pleased that the headset is 100% modular — the entire thing can be taken apart and put back together in a matter of minutes.

8. I’m curious about the use of Electron, as I’m pretty keen on JS too! What was involved in getting AR to run within Electron? Did it require any particular tweaks?

Electron is great because I can develop on one platform and not have the tricky overhead of porting it to another. While I’m still in the early phase of developing software for the Triton I want to explore what WebXR has to offer for AR HMDs. Electron is perfect for this because it will integrate with frameworks such as A-frame, Three.js, and ReactVR by just using Javascript. For the demo you saw I tweaked a stereo rendering algorithm and used Three.js to render a 3D graphic.

In addition, I’d like to abstract away all the messy details of working with depth/tracking sensors like the Intel Realsense. Ideally, I aim to build a launcher with a checkbox-like list that will automatically install all the drivers and get it running smoothly.

9. How can people potentially get their own Project Triton headset?

Right now I have plans to open source the entire design so anyone with a 3D printer can print the parts to assemble a Triton. I realise not everyone can do that, so I’m planning to offer an assembly kit that will ship with all the 3D printed parts, the reflectors, and the display unit. Although I haven’t worked out a pricing model yet it will be highly affordable.

I can’t make any promises with all the delays going on due to COVID-19 but the Triton should be available by early summer 2020.

10. How will the design likely evolve from what we see so far?

Elements of the design will inevitably be improved before it gets pushed to production. You will likely be seeing Triton Mark 1.1, 1.2, 1.3, etc. over the next few weeks. The moon dust grey is a temporary colour for the prototypes. I plan to introduce some attractive colour schemes. 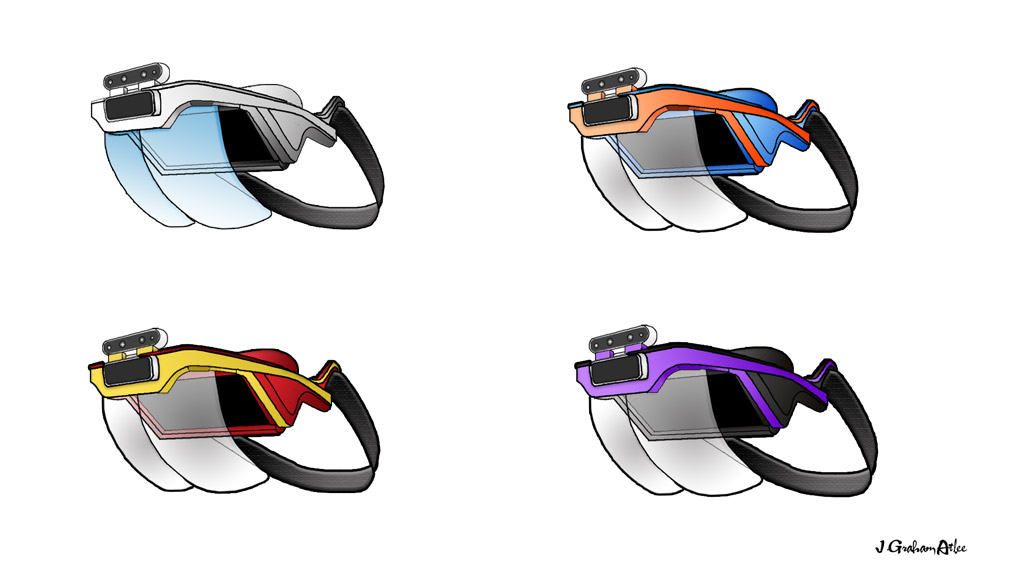 Some of Graham’s concepts

The Triton will ship with a mixed reality engine that will blend digital with the physical through the use of sensors and software.

Looking to get involved and work on the project? Or get your hands on a kit?

Thank you to Graham for taking the time to answer questions all about his very cool Triton project! He’ll have a dedicated website up for the Triton project within the next month. Until then,: