Eva Hoerth on Women in VR

The VR community is starting to build and grow in a big way in 2016. In the early days of this community growth, we can really help shape what we want the VR scene to become in the next few years. One important focus that has been popping up over the past year is the number of women in VR. VR has a small but incredibly outspoken and passionate female community who often tweet under #WomeninVR and hold meetups encouraging more women to get involved. Eva Hoerth is one of those incredible people in the industry who are driving the VR community growth as a whole by holding events and running two Slack channels for VR. She was kind enough to share her thoughts on women and the VR community right now. 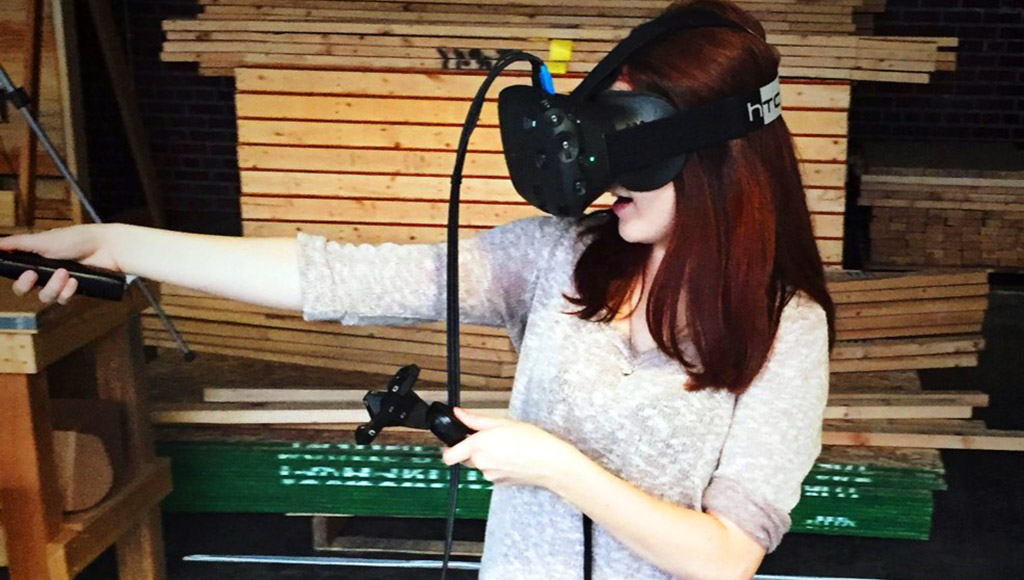 Eva hanging out in VR with a HTC Vive

What lured you into the VR community? What is your VR origin story?

I was lured into VR by Tom Furness, a VR pioneer who has been exploring the design of VR displays since the 1960’s (he’s been titled the “godfather of VR” by the community). I heard him speak at a Seattle VR Meetup in December of 2014. Going into the event, I knew very little about the technology. Pretty much nothing, for that matter. I knew it was big, though, based on the 100+ attendees.

Tom delivered an incredibly inspirational talk about the possibilities that VR brings, and how it can “serve as a bridge between the wonders of the real world and the infinite possibilities of the human imagination.” I was hooked right from the start.

But I still had no idea what VR even looked like. It wasn’t until I tried a virtual experience designed by DeepStream VR that I understood what VR felt like. I didn’t put on an actual headset, but instead peeked into their 3D viewer (today they’re using the Oculus Rift). I was suddenly floating on a boat down an icy river surrounded by penguins, mammoths, and snow. Giant snowmen chucked snowballs at my face, and I could shoot snowballs back.

My mind was blown. I had teleported. I never thought that would happen in my lifetime.

Later I realized that this VR experience, called Snow World, has been used in hospitals across the world to help burn victims control the agonizing pain that they endure during bandage changes and wound cleaning.

My mind was blown further. I was amazed by how such a simple application could be so transformative.

As a UX designer, I am hooked on the potential of virtual and augmented reality and the design challenges they bring. I was growing increasingly bored of designing websites and mobile applications; I always felt like there was something missing. People don’t easily connect to 2D applications on a deep emotional level. Yet in VR, you could be in the most minimalist environment with no interactions and still feel more emotionally connected than you would with a well-designed mobile application.

That is incredibly intriguing to me.

Since the night of the VR Meetup, I wanted to learn as much as possible about VR. So, I began attending all the events and learning all the things! I participated in the Seattle VR Hackathon in September 2015, where I met Tom Furness in person once again. He later offered me a job in VR and I nearly cried from joy.

I’m now a Design Researcher for VR and exploring how we can craft meaningful immersive experiences that don’t make humans vomit. I’m heavily involved in building up the VR community, and I’ve started a couple Slack groups:

I am also organizing VR hackathons in Seattle because I think they are the perfect way to transform VRgins into VR pros.

Tech roles are often seen as male dominated, is VR similar? You have been involved with women in VR events and actively encourage women into VR, do you feel that the VR industry is helping reverse the male dominated trend?

I have been attending VR events for over a year now in Seattle and I can confirm that there is always a male majority. I counted only 4 women out of 55 attendees at a meetup the other night. Hell, I even had a guy literally ask me at a VR hackathon if my “boyfriend made made attend”. We women in VR are sadly still experiencing the notorious tech prejudice that has existed for far too long.

But at the same time, I have been observing an overall increase in female turnout within the past month. As VR becomes more accessible to consumers, I can see it as being less of a “geeky tech toy” and more ubiquitously adopted among all genders.

The resurgence of VR is exciting and everyone around me wants to get involved–regardless of gender. I’ve actually witnessed more women founding VR startups than I have men. So, I do foresee a reversal in the male-dominated space. However, I still think that the “girls don’t game” mentality will persist during this early stage of VR development.

With that said, it’s been great to see Women in VR communities grow both online and in person (shout out to San Francisco for killin’ it). This type of community is lacking in Seattle, which is why I’m working with a few other women to change that. We are collecting names of women interested in VR, organizing “Women in VR” workshops, and visiting high schools to speak to female students. These initiatives aren’t excluding males, but rather fostering a more welcoming environment for all genders.

What would you say to women who are considering getting into VR but are worried that it will be too male dominated? Any words of advice? 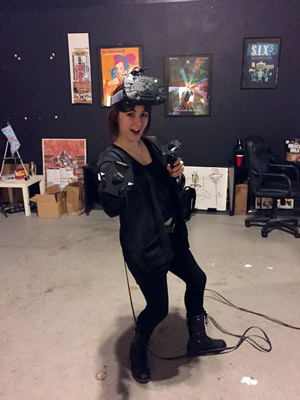 My ultimate advice is this: don’t let anyone hold you back.

Go dive into VR and prove that you are just as capable of VR design and development (because you are). Create kickass VR experiences and demo them at events. Write about your work. Share it online. Tweet it (#WomenInVR). Go to all the VR events, especially hackathons. Publish research. Develop best practices. Stay confident even when men may treat you differently. Be there to support other women trying to get into the space.

And most importantly, never forget how awesome you are.

If VR and other mixed reality experiences are the future of tech, we have to work together to make the design process as inclusive as possible. VR is introducing a new design paradigm that requires insights and expertise from all genders, ages, and expertise. If we don’t encourage diversity in this space, how can we come to realize the platform’s true potential?

Are there any particular inspirational women in VR they should look up and follow?

How can women find events near them targeted at women in VR?

I would honestly start out by just Googling “women in VR + (your city) + event/meetup”. You never know what you’ll find.

Other than that, there’s a few other online communities that exist that often point to events going on in the area:

I encourage women to attend any VR Meetups/events, because they have just as much as a right to be there. Going with a group of women can help make things more comfortable. If women have a stronger presence at VR events, it will trigger the reversal of the male-dominated mentality in this space.

I also strongly suggest that women attend VR hackathons. They’re a great way to dive into VR design and development.

Any final thoughts or words you would like to leave us with?

I’m always happy to help women transition into the VR space. If you’d like to reach out to me, you can find me on Twitter @downtohoerth!

A big thank you to Eva for taking the time to answer these questions and an even bigger thank you for the incredible contributions she is making to the VR community! As she mentioned above, you can follow her on Twitter at @downtohoerth. Her Global VR Slack channel is also a great place to hang out with like minded VR enthusiasts. Personally, I think getting more women into the VR industry is an incredibly valuable and important focus which will help make VR the best it can be! Let’s have a diverse and open community sharing a great passion — virtual reality!

#19 Eva Hoerth, Design Researcher for VR | Say Something Worth Stealing