This week, Sony put in a new patent for a PSVR controller with an analog stick and finger tracking, Amazon has plans on tracking their employees with wearables and Intel has a pretty nifty AR headset coming this year! 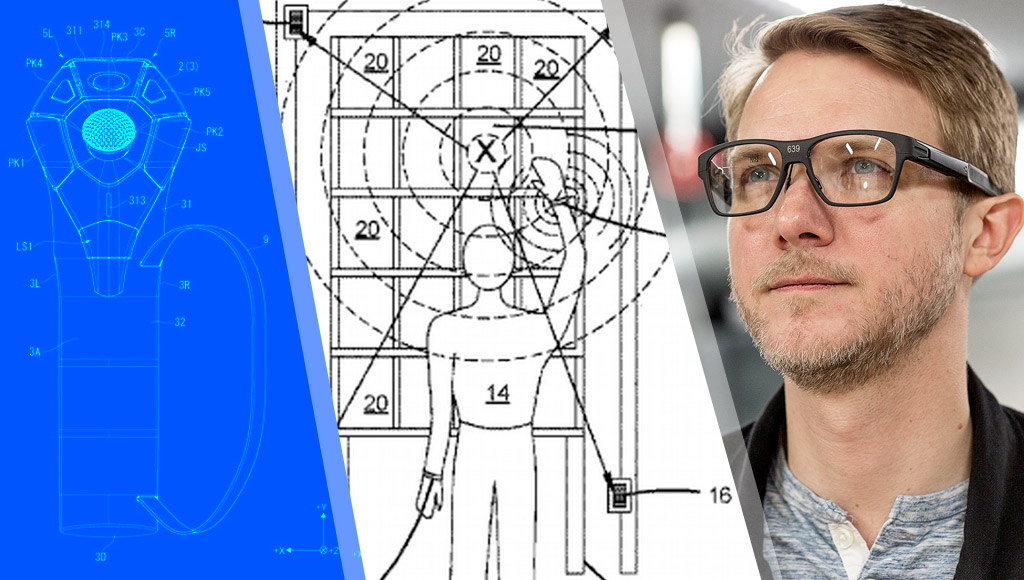 My fun, relaxed, light-hearted online course is edging closer to release! No matter your skill level, it’ll help you build a virtual assistant/chatbot 🙂 Pre-register and receive a discount code when it’s out as my way of saying thanks for the support!

Summoning and Superpowers: Designing VR interactions at a distance

Go go gadget hand! This is one of the coolest VR interaction design concepts I’ve seen to date, yet again from the great team at Leap Motion.

Step inside the FBI’s Unabomber investigation in VR

One of those things that VR does so well is historical recreations. What better way to have a history lesson?

A look at our evolving ability to create characters of greater depth and detail.

The first Steam hardware survey of 2018 says Oculus Rift and HTC Vive use are basically tied!

All I read was “toilet plungers as VR controllers” and I had to add this one in here.

This pastor is putting his faith in a virtual reality church

D.J. Soto believes “Christianity can be renewed through worship in virtual space”.

Look down and see your actual arms and legs inside VR with this tech.

Surf the VR web with Supermedium

A virtual reality browser for HTC Vive and Oculus Rift.

3D painting in WebVR has been optimised — here’s how they did it!

Karl Guttag isn’t too happy with Intel’s purchase and then sale of AR startups.

The Verge had an exclusive look at Intel’s next AR approach — retinal projection. It’s part of a new spinoff company called “Vaunt”. They look promising!

The University of Alberta uses AR to project a patient’s internal anatomy onto their body in real-time. Smart concept!

The future of hospitals definitely looks to be AR! This release says using AR in the operating theatre “could help surgeons to improve the outcome of reconstructive surgery for patients”.

This is what a mixed reality hard hat looks like

Here’s a a “Microsoft-endorsed hard hat solution” to bring AR to construction workers.

What if you could look down and see your actual arms and legs inside VR, or look at other real-world people or objects as if you weren’t wearing a headset?..

After copying Snapchat, Facebook is preparing a new wave of AR camera lenses

The whole smartphone AR lenses war is heating up!

Epson collaborate with ARtGlass, will use AR to bring us history to life

They are bringing the homes of US Presidents George Washington and James Monroe will come to life for visitors.

Not everyone is quite okay with being tracked constantly while working though.

Apple Watch is a bridge to the future

A great overview of where Apple’s current tech will lead to in the near future.

Not a concept I was expecting from wearables to be honest!

Both on and off the field, wearables are taking on the NFL’s concussion crisis

Concussions are a pretty big issue and tech might be the solution.

State of the user: how the Fitbit Ionic is sitting with people who bought it

A look at what Fitbit’s app ecosystem is starting to look like.

Pre-orders sound like they’re going well (depending on how much pre-order stock they had initially), delays mean they’ll now ship on 13 Feb.

Anti-hate bots are “designed to clean up the sludge on some of the most popular social platforms”.

Drone catchers and face-detecting planes will guard the Olympics

We often forget just how much emerging tech’s advancements also require advancements in the defence against their misuse. The upcoming Olympics are thinking ahead.

We’ll never have to vacuum again!

The 6 biggest hurdles slowing the pace of AI innovation

What a lovely idea!

I always find the combination of AI and neuroscience fascinating, this Wired article is no exception. What a world we live in.

Ever wondered how they stop the trigger word triggering devices? Here’s the magic!

AI won’t be quite the revolution you expect

Wired say “the limits of modern artificial intelligence are closer than we think”.

The squishy ethics of sex with robots

“Can you consent to sex with a robot? Can it consent to having sex with you?” What an odd world we live in!

Ever dreamed of owning your very own Pokédex? We aren’t there yet but Recast.AI put this together to get us a step closer.

Why retailers should embrace chatbots

Chatbots will be able to help retail and other businesses in quite a few ways.

Artificial intelligence’s ‘black box’ is nothing to fear

Vijay Pande of the New York Times says “we actually understand this technology better than we understand human decision-making”.

David Weinberger says “democracy shouldn’t leave it to companies to figure out the ethics of artificial intelligence”.

Google is using AI to predict flight delays before airlines

This is a tool that anyone about to board a flight is going to love!

Your future doctor may not be human. This is the rise of AI in medicine.

A tour of the top 10 algorithms for machine learning newbies

Want to get into the algorithms but no idea where to start? Here ya go!

How to build your own AlphaZero AI using Python and Keras

Then once you’re done with those algorithms, teach a machine Connect 4!

Charlie Gerard posted this on her LinkedIn — a quick example of her pushing a cube in the browser just by thinking about it! Super cool!

Still unsure what LoRaWAN is? This could be the article for you!

Connecting up the Casio SK-1 keyboard to an Arduino!

It definitely has advantages!

3 co-located events. 15 conference tracks. 9,000 attendees. 300+ speakers. 300+ exhibitors. It’s all happening in London! Use the discount code DEVDINER20 to get a good deal on your tickets! They have a a free track on AI for developers too!