This week, we had the first backflipping robot, a Buddhist monk robot, a home assistant robot, Jibo, sadly nearing the end of its life (but going out with a dance!), new in depth looks at the HoloLens 2 and more! 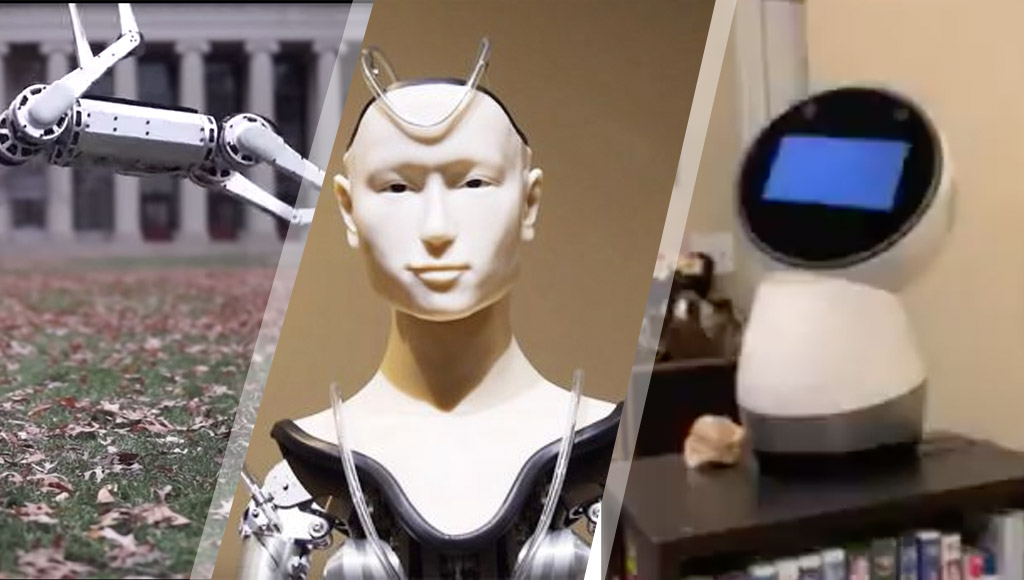 A backflipping robot, a monk robot and Jibo, a robot nearing the end of its life

Oculus Quest will require a higher standard of content from developers

Oculus say they’re taking a “quality-first” approach, so standards will be a bit higher if you want to build for their platform.

Why HTC targeted Vive Pro at gamers, and why Pro Eye won’t replace it

4 lessons we learnt raising money for our VR adtech startup

The team at Admix share what they learnt knocking on VCs doors in 2017 trying to raise money — here’s their lessons learnt after 60 pitches.

Qualcomm is eagerly looking to get into development of smart phone-powered 5G XR headsets.

How to record good audio for 360 videos by Gaba VR

Here is a tutorial on recording good audio for those who might indeed want to record VR audio.

5G streaming could change the way we think about delivering VR content.

A nice medium difficulty tutorial on generating a low poly style terrain by generating the height field in a 2D Canvas and then rendering it using ThreeJS.

Karl Guttag has a fascinating in depth review of the HoloLens 2, he says “in terms of practical human factors, the Hololens 2 makes the Magic Leap One look like a poorly design child’s toy.” He worries about its quality in outdoor use and that there is likely to be flickering on the sides of the image.

HoloLens 2, all the specs — these are the technical details driving Microsoft’s next foray into augmented reality

Next Reality has a look at the specs for the HoloLens 2 that Microsoft have released.

The most important XR news from MWC 2019

Skarredghost looks at the key bits of XR news from MWC 2019 for those who missed it last week.

The new Oculenz AR Wear glasses appear to be strongly targeted towards the medical profession and have eye tracking, cellular connectivity and more.

The human eye’s understanding of space for augmented reality

A really neat look at how the human eye interprets AR from the UX Collective. Really nicely done!

Nreal Light AR smartglasses will now be giving people the option of using a smartphone as the system’s computer rather than the hip computer included in the first iteration of the product.

After more than 6,500 applicants, we’ve got at least 31 winners — not all of which have been publically announced.

CNN brings its news networks to Magic Leap One

CNN has an app that displays “live news, on-demand programming, and digital exclusives from CNN, CNNi, and HLN via the Screens feature of Magic Leap’s Lumin OS”.

How a self-taught teen built his own North Star headset

A look at Graham Atlee, a 19 year old new to programming who put together his own Leap Motion North Star headset and starting making concepts in Unity!

How to set up and connect a Wear OS smartwatch

Could be handy if you need a guide to pass onto family or friends who purchase their first Wear OS smartwatch.

Apple Watch dominated smartwatch sales in 2018, accounting for half of global shipments

That’s a whole lot of smartwatches!

How to transfer music to your Fitbit

A handy guide for those like me who keep forgetting their Fitbit can have music on it.

This library “boosts the accuracy and training speed of large AI models”.

A new development board is available that can do machine learning locally. “It can execute state-of-the-art mobile vision models such as MobileNet v2 at 100+ fps, in a power efficient manner”.

Jibo’s servers are being shut down soon, so the robot is telling people: “Maybe someday, when robots are more advanced than today, and everyone has them in their homes, you can tell yours that I said ‘hello’.” It then says “I wonder if they’ll be able to do this” and dances.

Researchers in Australia developed a fast, reliable way to count koalas using drones. Now that’s a new use of the tech!

How can we design AI for the best long-term interests of humanity?

Amy Webb has a new book about the need for leadership to keep emerging tech from getting out of hand. Fast Company have an excerpt from her book here.

Is ethical AI even possible?

The New York Times ponders whether we can ever reach ethical artificial intelligence.

Watch: here’s the first four-legged robot to do a backflip

FedEx this week introduced an autonomous delivery robot “designed to make same-day drop offs and last-mile transfers” so retailers can make nearby deliveries and more!

Robots have disassembled 700,000 rockets for the U.S. military

Definitely a task we’d prefer robots to do than humans.

A new board from the BeagleBoard.org Foundation has a focus on improving how well it can run machine learning applications.

A 400-year-old Japanese temple have an AI monk that delivers religious teachings in multiple languages.

The real reason Amazon, Apple, and Google are some of the world’s biggest companies

This article says that real progress in AI is already happening in systems that enhance – rather than replace – human capabilities.

I like that Stacey Higgenbotham agrees that we need an alternative to voice for controlling the smart home — gestures would be amazing.

Do you need a smart-home hub?

The Wirecutter has a nice look at smart home hub options and what would be best for you.

IOTA: the distributed ledger technology designed for the Internet of Things

The IOTA has something called the “Tangle” — “In the Tangle, transactions are linked to each other in a novel method, requiring only a small amount of energy expenditure, compared to the high energy requirements of traditional blockchains.”

Build a touchless toilet flusher with an Arduino

Now there’s an interesting DIY project for your next weekend!

CRT badge made from a Raspberry Pi and hacked Sony Watchman

This definitely gives this Sony Watchman a new lease on life!

That microphone that was inside Nest Secure devices that people didn’t know about until this year? The US senate have some questions about that.

This could be very handy for many microcontroller projects!