Wednesday, May 1st, 2019 by Patrick Catanzariti

This week, we have brain signals successfully generating speech, Anki (the company behind the Cozmo and Vector robots) has had to let its employees go, Superhot VR is coming to arcades and we’ve got talk of why LiDAR will soon be obsolete. 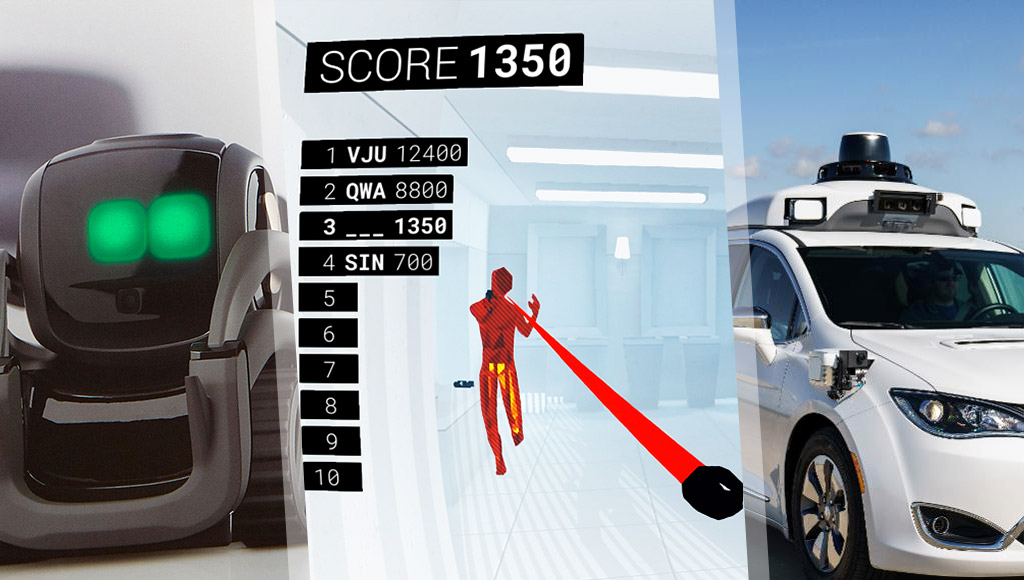 Hoping for a miracle for our friendly home robot named Vector, Superhot VR coming to arcades and why LiDAR might not be on the cars of the future

Blake J. Harris was writing a book all about Oculus but it got a bit wild after the Palmer Luckey drama. Here’s a look at what he went through to get the story out.

They are bringing one of the best VR games around to arcades with some new arcade specific features!

Nintendo’s VR upgrade for Zelda messed me up

A look at what The Legend of Zelda: Breath of the Wild and Super Mario Odyssey are like in VR. They both take different approaches and it makes all the difference.

SeeingVR: what Microsoft is doing for the visually impaired

“Microsoft Research, in partnership with Cornell University, developed a range of techniques to make virtual reality accessible to the visually impaired”.

How changing places in VR can teach employees soft skills

“BODYSWAPS works by letting employees practice those skills, acting out a range of high-pressure workplace scenarios with AI-powered virtual humans”.

Waiting for Rift S? This $299 VR headset has no external sensors and has HTC Vive Pro resolution

The Samsung Odyssey Plus is currently on sale for $299 and 360 Rumors see it as a pretty good option with its specs!

Brie Larson played Beat Saber on The Tonight Show! However, now if anyone records the same Beat Saber level on YouTube it gets flagged by content ID…

As a part of some of their grants, you have the chance to get a Magic Leap headset!

A report from 9to5Mac says that this year might hold the news of OS support for AR headsets… while just a rumour, we could see hints at Apple’s AR headset plan this year.

Childish Gambino and Google team up for a multiplayer AR app

Pharos AR allows you and your friends to explore a VR/AR musical neon world via smartphone.

The Oppo Reno 5G is the first to support Nreal’s AR glasses.

This is absolutely incredible. If you read only one article this week, this should be it. You can hear samples of the generated audio further down in the article.

Anki is closing the doors on its toy robot business

The startup behind the cute robots Vector and Cozmo has had to let its employees go after failing to get more funding. They’re still working to bring things back but it’s very sad news! Their robot toys are some of the best around.

What failed startup Anki did for robotics

Fast Company look at what Anki had achieved so far (quite a bit!).

On the future of Tesla and full self driving cars

Steve Cheney points out that in 3-4 years – when people think LiDAR could be on cars – “AR headsets will be pushing hundreds of millions of advanced image processing chips which are capable of much higher resolution”. We’ll have better image processing than LiDAR and Tesla are already focused on the image processing path with their recent announcement.

Despite how amazing the potential of image processing is… right now it’s apparently still quite easy to fool.

Alexa will speak Spanish in the US later this year

People in the US will be able to speak to Alexa in Spanish soon.

No news yet, but we might hear more “soon” about controlling our tech with our minds.

“In their spare time, a Massachusetts couple programmed a system that they say accurately identifies Rembrandts 90 percent of the time”.

The terrible truth about Alexa

This Gizmodo author read through a history of everything they’d said to Alexa and realised a few things.

This story made the rounds, it might not be as surprising for Dev Diner readers, Amazon get humans to occasionally help train the system. The question is how many humans, how secure access is and how often.

Walmart unveils an AI-powered store of the future, now open to the public

“Machine behaviour” is the term that researchers at the MIT Media Lab have proposed for “a new kind of interdisciplinary field of study to figure out how AI evolves, and what it means for humans”.

The U.S. military wants your opinion on AI ethics

“The U.S. Department of Defense visited Silicon Valley to solicit ethical guidance on how the military should develop or acquire autonomous systems”.

MuseNet generates original songs in seconds, from Bollywood to Bach (or both)

OpenAI’s latest creation, MuseNet, was trained on works from dozens of artists, including Chopin, Bach, Adele and the Beatles.

An army of micro-robots can wipe out dental plaque

“A swarm of micro-robots, directed by magnets, can break apart and remove dental biofilm, or plaque, from a tooth”.

Magnets can help AI get closer to the efficiency of the human brain: new brain-like networks could help robots approach human-like efficiency at object recognition tasks

Magnets seem to be the way to do robots this week.

A first in medical robotics: autonomous navigation inside the body: robotic catheter, using a novel sensor informed by AI and image processing, makes its own way to a leaky heart valve

The first demonstration of a robot able to navigate autonomously inside the body!

Internet of Things, Wearables and Makers

This tool can run on your Mac, examine your home network and tell you what IoT devices are doing. It’s part a research project they’re running to help consumers learn more about their IoT devices.

Some good points raised in this article on the IoT.

How Apple could beat Fitbit to the ultimate sleep tracking wearable

Wareable looks at Apple’s plans to bring sleep tracking to the Apple Watch.

“This control panel is designed to sit on your nightstand, and has three primary functions: button-based IoT device control, a digital clock, and wireless device charging”.

R/Arduino – this is an Arduino project I’ve been working on for over a year, I reckon the (nearly) end result is worth it