This week, we have even slicker looking Vuzix smartglasses, the latest Monopoly has a smart speaker calling the shots, spinning details on the new HTC Vive Cosmos revealed and more! Also… We’ve reached the 200th Dev Diner newsletter! 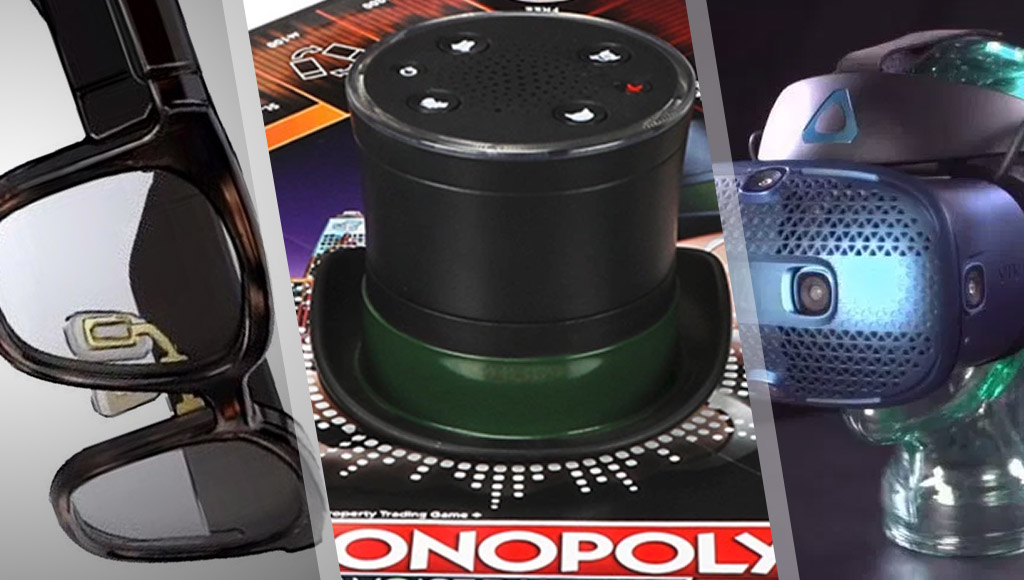 In a video that only showed the headset spinning around, much was worked out! The new headset will include six inside-out tracking cameras.

Skarredghost looks at how to install and uninstall unapproved apps on Oculus Quest using SideQuest.

A curious mix of the Beat Saber and Tetris.

What comes next for Oculus after the Quest launch

“Jason Rubin, vice president of special gaming projects at Facebook, said the Oculus Quest launch went well and it should have 100 games by year end”.

Penn & Teller VR: pranking your friends has never been this fun

This sounds like a curious new approach to VR games!

Disney created a multiplayer filmmaking ‘game’ set in the world of The Lion King so the crew could see the scenes via HTC Vive headsets.

How to edit Premiere Pro in VR with Oculus Rift S

With this technique, you might be able to see your 360 video in VR as you’re editing the video!

The unreleased next model of the Vuzix glasses looks much more like regular glasses than even the current one does!

“Harry Potter: Wizards Unite” is a glimpse into the future of augmented reality

The team that brought “Pokémon Go” to the world has brought Harry Potter AR to the US (it was already available in Australia for early testing).

“Google unveiled a trio of new immersive advertising products with appeal to consumer brands” — these could do well if adopted!

Magic Leap claims he stole augmented reality ideas as an employee, but who is Chi Xu, the founder of Nreal?

Chi Xu, the CEO and founder of Nreal, previously worked at Magic Leap as a software engineer — they’re alleging he stole secrets.

Augmented reality has immense power — its users will need rights

“The experience from the emergence of social media underlines the complex and numerous challenges yet offer transferable knowledge for AR”.

This can be used to record people as they’re in VR using the Oculus Quest! (Just note the GIF they show isn’t this tech in action)

In the video, she uses “a Wacom Intuos Pro with a Pro Pen 3D stylus to directly manipulate a 3D model in her real-world environment, as well as draw on it, resize it, and then draw unconnected notes on the nearby wall, which has been spatially mapped by the Magic Leap One.”

In a world of so much photoshopping, this tool might help detect when something has been photoshopped!

That video of a robot getting beaten is fake, but feeling sorry for machines is no joke

Here’s a video parodying Boston Dynamics’ videos — watch it all the way until the end!

This is how Google’s phone enhances your photos [YouTube]

Curious how they sharpen up the image like sci-fi movies? This YouTube video has a glimpse into how!

Yet it might inspire how robots are designed in the future.

Researchers have an AI framework that might guide drones through cluttered environments that they’ve never seen before.

Benchmarking machine learning on the new Raspberry Pi 4, Model B

We’ve got more details on the new Pi in the IoT section below, but here’s how the new Raspberry Pi performs with machine learning (much better!).

Why AI investors don’t get it right

“Investors have been putting billions of dollars into AI startups every year for several years now. But they’re focusing on the wrong type of play”.

This Roomba-like robot can prevent weeds from growing in between rice crops.

NASA’s Astrobee helper robot has flown by itself on the ISS!

AI could study your brain to help teachers improve their courses

This machine learning might be able to look at your brain to see how well you understood the lesson.

This labeled data set of satellite images from major natural disasters is soon to be open-sourced.

Planet-saving robots? Robert Downey Jr. is on to something

Why not clean up the planet with nanotech?

The newest Monopoly gives you a voice assistant to keep everyone in check.

“PyRobot is a framework and ecosystem that enables AI researchers and students to get up and running with a robot in just a few hours, without specialized knowledge of the hardware or of details such as device drivers, control, and planning.”

No need for surgery or invasive procedures.

I really hope it can, this could be one of the most important uses of AI we have.

Alexa could spot your cardiac arrest—by listening to your breathing

“A new tool that uses the microphone in your smart speaker or smartphone to detect warning signs, and then calls for help on your behalf, could help boost survival rates.”

You’ll be able to identify a variety of birds, plants and insects with this Raspberry Pi set up!

The Holy Grail: what you need to know about wearables and glucose monitoring

Glucose monitoring is indeed the Holy Grail for wearables, here’s Wareable’s take on it all.

Jawbone Health: everything we know so far about the new premium health platform

Wondering what happened to Jawbone? The fitness tracker company? Here’s what we know so far.