This week, we had a new Apple headset patent, Tilt Five’s tabletop-focused AR headset launched on Kickstarter, AI focused on your privacy, Facebook’s AR glasses partnership revealed and so much more! 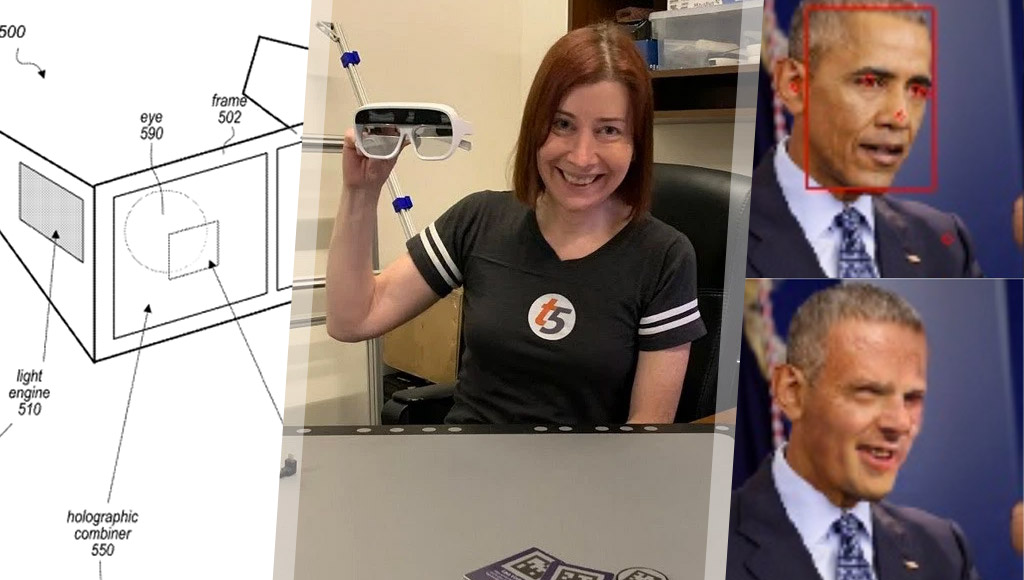 Tilt Five is an AR headset focused on tabletop gaming — it looks pretty darn cool, I covered it in my 25 AR headsets worth checking out in 2019.

Those avatars can then be used in High Fidelity’s VR platform.

Brain may not need body movements to learn virtual spaces

Spatial navigation and memory appear to not be affected by whether you actually physically move around the space or just virtually do so.

“A patent published Thursday describes a pair of glasses that don’t project light onto a lens, but rather into the retina of the wearer”.

One developer managed to test out the StarTester mode in iOS and recorded it for us to see!

Three separate AR headsets codenamed Luck, Franc and Garta with different FOVs were spotted in the code too.

The augmented city: how technologists are transforming the Earth into theater

A look at spatial computing and the move to the AR Cloud.

Developers can now publish “Concepts” which are “free apps with limited functionality” available to Magic Leap One users to test out.

It’s a new clip-on camera for video calling, AR gaming and content co-watching that goes on your TV.

Previously, you had to go into a store to get fitted in person — now it can be done via your smartphone!

Facebook has partnered with Ray-Ban maker Luxottica to make AR glasses for release between 2023 and 2025 that replace smartphones.

“ThirdEye’s claims their 6-ounce MR headset is the smallest in the world”.

Snap is extending the use of its new 3D Camera Mode to use the depth-sensing of newer iPhones. You can also add AR effects!

TeamViewer is bringing its TeamViewer Pilot AR mode beyond its mobile apps to Android-based smartglasses.

Fitbit is considering a sale, with Google named as a potential buyer

Fitbit is considering opening itself up for acquision options and Google is apparently interested in chatting.

Amazon is building Alexa earbuds that can track your fitness

They’ll reportedly have an accelerometer, work with Android and iPhones, and would be priced below US$100.

It makes a wristband capable of transmitting electrical signals from the brain into computer input.

Google are putting in new safeguards against accidental voice assistant collection and transcription.

The BeagleBone AI is now shipping

This board is focused on machine learning and looks like it’s pretty cool.

You’ve been warned: full body deepfakes are the next step in AI-based human mimicry

Fast Company look at where deepfakes that mimic entire bodies, rather than just the face.

AI weekly: automation in the workplace could disproportionately affect women

A report says the automation of work might disproportionately disrupt the careers of women.

Is that supplement safe to take? this AI tool scours research to find out

“A new tool called Supp.ai looks through years of health research papers to extract potential conflicts that may not be listed anywhere else.”

Alexa can finally speak Hindi for those in India who’ve had to speak English to her all this time.

See how an AI system classifies you based on your selfie

ImageNet Roulette is hilariously bad at classifying people — your chance to try it out ends on Friday when it’s shutting down.

It can hide who is in video footage using machine learning — a curious use for the tech!

The latest research from OpenAI put its machine learning agents in a simple game of hide and seek!

A list of things that are Alexa-compatible from smart bulbs to door locks to sprinkler controls.

I like that this uses a QMC5883L magnetometer instead of an ultrasonic sensor.