This week, we sadly farewell to Google Daydream and Google Clips, we’ve got PC Screensavers in VR, a robot solved a Rubik’s cube on its own, we’ve got a new Google Nest Mini, cool VR/AR demos and lots more! 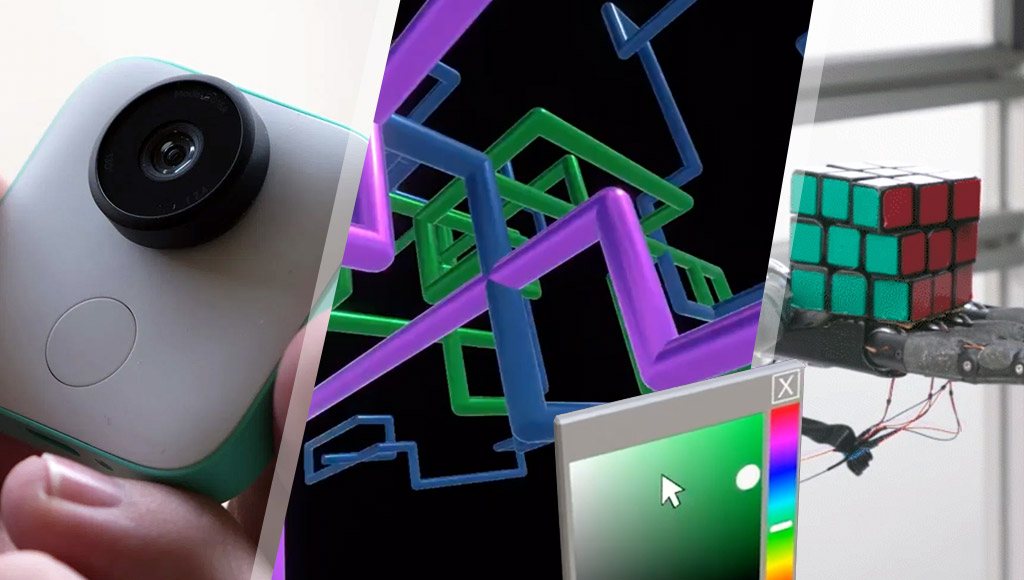 Google Clips, PC Screensavers in VR and a robot solving a Rubik’s cube on its own!

Sad news this week… Google has discontinued the production of its Daydream View VR headset and will not be providing VR support for its upcoming Pixel 4. That’s a whole VR platform coming to an end.

This prototype lets you walk around in the real world but enjoy a virtual experience (with safety precautions!).

This fantastic guide will show you how to use Gravity Sketch and NeosVR to create mandala art in VR!

This developer syncs up their Philips Hue lights with Beat Saber to make it much more exciting for everyone else around you!

BBC’s VR hub is shutting down

The hub will no longer commission and produce new VR experiences.

The VR-2 and VR-2 Pro are both enterprise focused, 4K VR headsets that work with SteamVR content and the OpenVR development platform.

Build your own Rube Goldberg machine in VR!

Enter into the glorious PC screensavers from the 90s… in VR!

6D.ai have a very cool demo of their AR SDK turning the real world into Lego!

For months, Magic Leap’s legal team has reportedly attempted to contact Nreal and its founder, Chi Xu, with little success. A few weeks ago — that finally changed.

They’re doing super well with their Kickstarter and now have more partners to release games on their AR platform.

A group of Brown University researchers have a concept app with hand tracking using smartphone AR and off the shelf hardware.

Powering the largest activation of the ‘AR-cloud’ to-date

This group turned a stadium into a 5G-enabled giant augmented reality experience for those looking through their smartphone.

This is one of the nicest guides to designing for AR that I’ve come across!

Rebble with a cause: how Pebble watches were granted an amazing afterlife

Ifixit say that around 200,000 Pebbles are still running thanks to the Rebble Alliance. My Pebble watch is one of them!

Being able to detect atrial fibrillation (Afib) is a big deal and could save lives.

Apple smart ring could bring smartwatch features to your finger

Apple won a patent for a smart ring, so we could see an iRing at some point too.

How AI powers the Pixel 4

“Arm says it has everybody beat in terms of volumes of AI and machine-learning chips deployed in the widest array of devices”.

A tool called BERT can now outperform humans on advanced reading-comprehension tests but there’s much more for AI to do.

This virtual being music group released an AI-generated album, and it’s not bad

I’m gonna be honest, the song I listened to sounded kinda creepy, but it’s impressive. “If you cry with every smile, I’ll make you stare” was one of the lines. “Make us one so we’re never alone again” was another.

They had a second person controlling the robotic arms through an Oculus Rift S VR headset.

AI weekly: why Google still needs the cloud even with on-device ML

There’s still a level of necessity for the cloud, but we are moving towards much more edge computing.

“Live Caption and Recorder on the Pixel 4 and Pixel 4 XL show that Google wants to rule offline natural language processing”.

The video is somewhat mesmerising.

Robots have skin now. this is fine

“A new project created synthetic skin that works much like our own nervous system, opening the door to new, safer, more empathetic robots”.

Apple’s iPhone recycling robot can take apart 200 iPhones an hour — can it dismantle the company’s footprint?

I’m glad the robot exists but we need to be building hardware with the long term and recycling in mind from the start.

Alexa and Google Home abused to eavesdrop and phish passwords

Researchers have found a way of creating malicious apps that can listen in by sneakily prompting for responses using silent characters (so the user doesn’t hear the voice prompt).

The Nest Mini’s fabric-covered top is now made from 100 per cent recycled bottles (yay!), has a built-in wall-mount, more powerful speaker, extra microphone and more. Nest WiFi is the next version of their Google WiFi mesh routers.

The Arduino IDE finally grows up

The Arduino Pro IDE Alpha release is out and provides more features than the long running Arduino IDE.

Will the rise of IoT and slowing of Moore’s law contribute to climate change?

Drew Henry, senior vice president at Arm, on “the growing IoT ecosystem’s compute demands and the impact that could have on climate change”.

The new modules provide both indoor and long-range Bluetooth solutions.