This week, we’ve got a new Samsung VR headset patent, underwater VR, underwater AR too, a fancy smart visor for drivers, The Walking Dead on PC-based VR and lots more!

That’s Tuesday 8:30am UTC time! Thanks to those who came by last night! We chat about the upcoming newsletter’s stories and tinker with tech live on air! Yesterday, we tried out the often shunned personal assistant, Bixby, had another round of ASMR with Alexa and had a really fun robot cat inspired performance from Meri Amber! 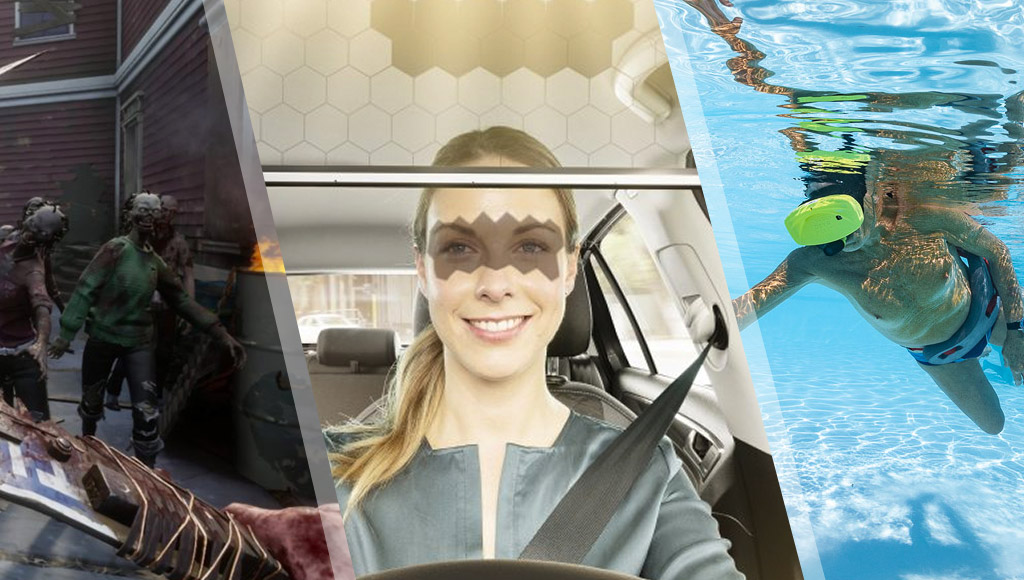 The Walking Dead VR, a smart visor and VR underwater to simulate space!

Spice up your Oculus Quest with Simpsons, Minecraft, and Star Wars environments

Rather than the typical home environment with your Oculus menu, why not hang out in the Simpsons lounge room?

This game was out all the way back in 2017 on other headsets, but its attempt to get on the Oculus Store for the Quest was rejected — bringing them to SideQuest fame instead.

The Walking Dead: Saints & Sinners might be the darkest VR game yet

Despite the many delays around VR titles — Valve wants you to know theirs is good to go.

OpenVR support is also deprecated in 2019.3.

How do you remove gravity for a VR experience? Put that experience underwater!

MozVR have created a demo to celebrate the release of the WebXR v1.0 API!

“Apple CEO Tim Cook, Google CEO Sundar Pichai and Snap CEO Evan Spiegel each, in unrelated statements, kicked off 2020 by giving us insight into what they see on the horizon”.

It uses AR to bring a virtual piano player to life on a real-world piano. So very cool!

These look really cool and track your distance, automatically know when you take breaks and more!

Instagram filters are becoming more and more advanced, Spark AR can do a whole lot!

It now uses facial recognition to identify people and place AR content around them in a sorta virtual belt.

A really curious Magic Leap experience in which you watch glowing particles dance around in response to your breathing.

My predictions for augmented reality in 2020

Mr Ghost Howls himself has his predictions and forecasts for the trends of AR in 2020.

It “uses AR and VR to modernize the rough and tumble world of event planning”.

The team at CourseDuck shared this with me and it looks pretty darn useful for those who want to get into machine learning!

It manages to block sunlight while staying transparent.

“Starting today, Google will make suggestions about items you can add to Collections based on your Search history across specific activities like cooking, shopping or hobbies.”

Not the best approach by the Met police — “While EU lawmakers are mulling a temporary ban on the use of facial recognition to safeguard individuals’ rights, as part of a risk-focused plan to regulate AI, London’s Met Police has today forged ahead with deploying the privacy hostile technology”.

As we’re seeing with the Met news above, this might indeed be necessary.

“Amazon researchers describe in an academic paper an automated system that dubs foreign video clips in other languages”.

Boston Dynamics has released the source code for its robotic dog Spot to any developer who wants it — I worry if there’s no protections around what is allowed on the platform… I mean if Oculus are super picky, surely they should be too?

Scraping the web is a powerful tool. Clearview AI abused it

An AI epidemiologist sent the first warnings of the Wuhan virus

This ultrasonic gripper could let robots hold things without touching them

Researchers have created a gripper that uses ultrasonics to suspend an object in midair! I haven’t found a video of this yet but I really want to see one.

They’re right… it really does have “an inherently misleading name.”

“Police can add computer-vision software to ordinary security cameras for as little as $50 a month”.

“Uber’s AI research division has developed a system that can play text-based games with human-like self-sufficiency, besting prior work”.

The long awaited blood oxygen detection feature is ON! Here’s what the new features that have been unlocked mean.

Alexa, build me a house

Building out cheaper prefab housing is on the horizon and I look forward to the day we can just ask Alexa for one.

Put Alexa and Siri to work

The NY Times had a nice look at how to use the two personal assistants — good to pass onto those who aren’t as tech savvy.

The Amazon Echo Buds have just got their first discount

Don’t brush off mouth tech as a passing fad

What a punny headline.

This is a portable wireless radioactivity monitor a father put together for their child who was going through radioactive iodine treatment — really nice use of the technology.

A second look at Samsung SmartThings was worth it

Kevin Tofel had some really positive words to say about switching to the Samsung SmartThings platform recently. Worth a read!