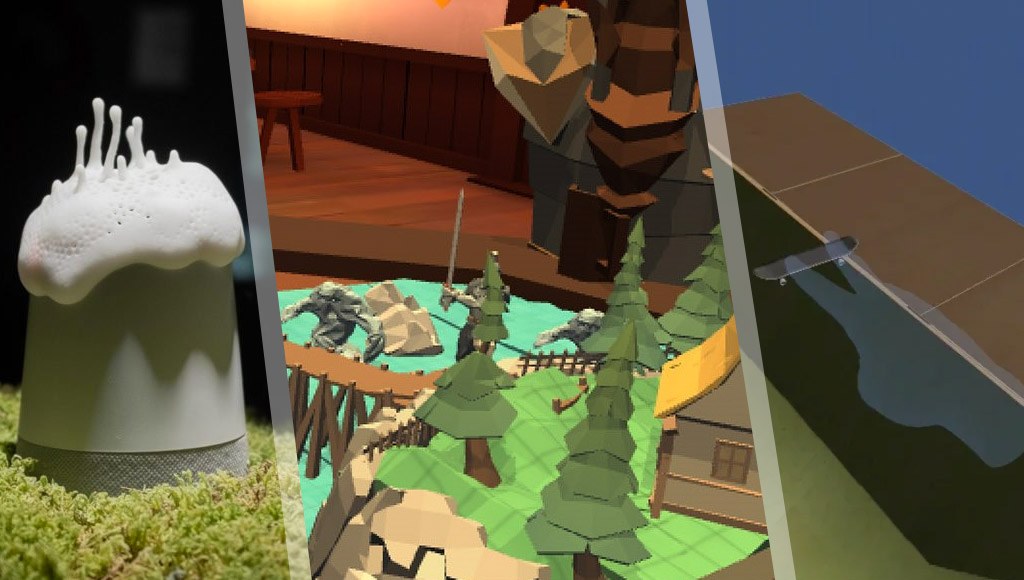 That’s Tuesday 8:30am UTC time! Thanks to those who’ve stopped by and watched! We chat about the upcoming newsletter’s stories and tinker with tech live on air! Yesterday, we experimented with image recognition and had a facial recognition themed performance from Meri Amber! (We’ll be having a few extra streams throughout the week, so follow the Dev Diner Twitch account to get notified!)

This is fantastic news for developers — VR is actually generating revenue for some VR apps out there today! A whole lot of revenue on Christmas Day that’s for sure. Definitely not the “VR is dead” that people kept preaching on about huh?

Gaming-themed Atari hotels will include VR and AR entertainment

Eight locations are set to open across the US, starting in Phoenix — I have to go to try this out and watch the Phoenix Suns play. It is important.

You get a tabletop experience in VR where you can play with others and roleplay with a whole lot of virtual pieces — it’s a really nice idea!

Waltz of the Wizard experiments with hand tracking on Oculus Quest

More hand tracking! In a new video from Aldin Dynamics, they show how hand-tracking tech is being used in their VR magic game Waltz of the Wizards.

Tony has his hands-on impression on the Varjo VR-2 with “perfect resolution of visuals to its users”.

“The Unity game engine, which powers most of the apps on the Oculus store, now supports the Vulkan graphics API with Oculus Quest”.

Where to buy Oculus Link cable for Oculus Quest

The Oculus Link cable to connect your Quest to a PC to turn it into a PC VR headset is sold out at Oculus.com but is available elsewhere.

How Boneworks turns your body into its key mechanic

Boneworks’ physics and interaction is on a whole other level.

Up your game with DIY headset motion tracking

Playing a lot of first-person shooters? You know those times when you want to peek around a corner? With this DIY headset with motion tracking — you just move your head!

You can now play the entirety of GTA 5 in VR, cutscenes and all

All you need is the free “R.E.A.L” PC mod and it adds full VR compatibility! Amazing!

This experience visualises all the data that smart devices have on us to try to bring awareness.

It allows them to look in the direction of people and it’ll tell them who they’re looking at, and features like that. Nice use of the technology!

Apple’s wearables are absolutely killing it — they’re now out-performing Mac sales. So hopefully this is a good sign that Apple will be keen to continue innovating with their next product… Apple smartglasses.

US users can go onto Pinterest, see makeup and then try it on using AR.

This music video highlights image recognition tech and augmented reality all in the one video. It’s quite a cool concept.

It’s super thin and lightweight which will work well with consumer AR headsets with small fields of view.

Alias privacy “parasite” 2.0 adds a layer of security to your home assistant

If you place it on top of your Alexa or Google Assistant devices, you’ll be able to control what they can hear and give it a new wakeword.

Comedy written for the machines

A viral TikTok video which makes no sense is showing what a future where algorithms purely decide virality might be like.

Google is on the rise with their smart speaker platform, but Alexa is still ahead in many languages.

The rise of smart camera networks, and why we should ban them

The Intercept puts forth their argument for what smart camera networks should be banned.

Why asking an AI to explain itself can make things worse

“Creating neural networks that are more transparent can lead us to over-trust them. The solution might be to change how they explain themselves”.

Google has a neural-network-powered chatbot called Meena trained on a 341 GIGABYTES of public social-media chatter. They’re testing it first privately to avoid a Microsoft Tay-style incident.

The Litter-Robot 3 is a clever cat poop scooper

For cat owners out there, this might be a life saver.

AI weekly: AI joins the fight against diseases like coronavirus

“In light of the rising death toll from the coronavirus, it’s worth looking at AI’s role in curbing the spread of other diseases.”

With Google’s Meena, are AI assistants about to get a lot smarter?

Rasa cofounder Alan Nichol weighs in on Meena and what it means for the future of AI assistants and conversational AI.

Google’s LaserTagger is an open source machine learning model that speeds up text generation across a number of common tasks.

Would you take a drug discovered by artificial intelligence?

An OCD drug created via AI is going to be tested on people.

Wired had a great little cartoon on robot baristas this week.

“Apple published a series of papers detailing its work in the field of voice recognition and multilingual speaker identification”.

AI understands less of what it reads than we thought.

This is what I’ve been working on at Nova — interactive radio! Hear an ad that tells you to ask your smart assistant to enter the comp and enter it — completely over voice. Super exciting!

Curious to see what Alexa’s Superbowl ad was? Here ya go!

Annddd… here’s the Google Assistant one! We’ll be comparing these ads in a Dev Diner Twitch stream tonight!

Two-factor authentication will be a mandatory part of the setup flow now (you’ll have to explicitly opt-out), there’s a control centre which contains a lot of pre-existing security options but makes them much easier to find.

This tiny microcontroller has a whole lot of sensors and even has its own display! I want one!

That’s pretty handy if you’ve got the packaging around to show Alexa, neat idea.

This research project trains up a budding kendo master to hit a target accurately.

Their new “Wavelength” platform promises “single-digit millisecond latencies” over 5G networks for latency-sensitive workloads like AR/VR streaming, game streaming, IoT and more. Could be super useful in the coming years.

Curious to know how it all works? Wareable has you covered!