This week, Apple have introduced AR purchasing in iOS, Sonic the Hedgehog has a mini Snapchat AR game and the retro Canadian Weather Channel was resurrected via a Raspberry Pi demo! 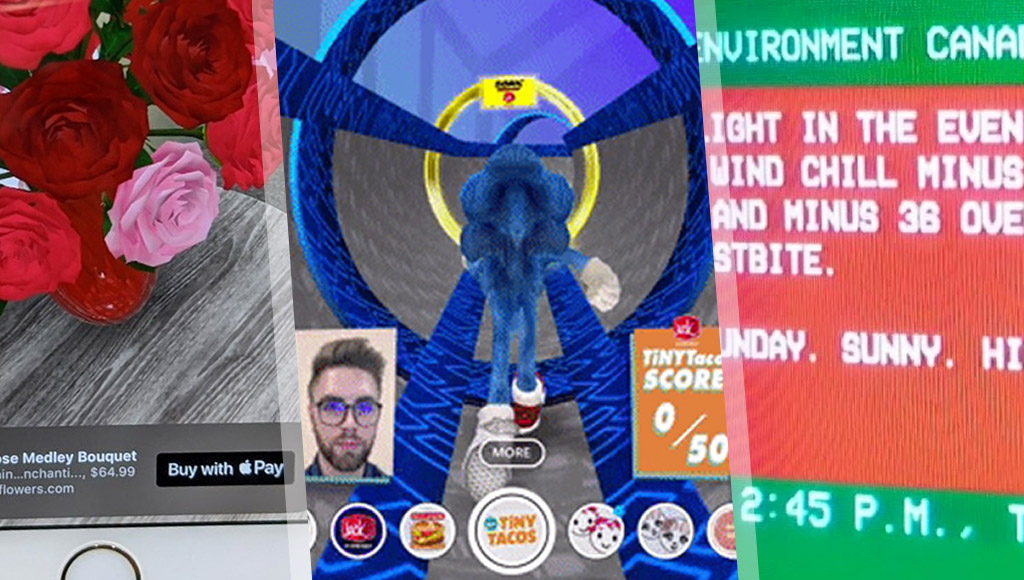 The Oculus Quest is accelerating things wonderfully — this article is really nice to see as it is hopefully combating the myth that VR is just something companies are pushing to no avail.

“This looks to be the year where we move beyond tentative experimentation into scalable deployment of immersive tech in the workplace”.

This was also highlighted in our new Discord by Erdtirdmans! Some very good VR games in ths bundle!

Looking for more about WebXR, examples of it in action, frameworks for building it, editors for it… etc? This list is a great start!

Curious stance in this article as recent discussions I’ve had with 3D modellers is that they still prefer flat screen modelling rather than doing it all in VR.

“A storyline with emotionally evocative details can reduce virtual reality cybersickness for some people, according to a new study”.

Sony say they needs to finalise a few other details first and seem to want to focus on getting the PlayStation 5 release right.

I haven’t tried it yet but it looks super curious!

Inside the wave of companies using VR to teach empathy

The beta version of SteamVR now has an all-new interface and an icon for Oculus Quest in Oculus Link mode.

Beast Pets is showing how virtual companions “can have a genuine emotional impact on users”.

I’ve already bought my copy as it’ll come in handy for an overview of the tech I’m putting together for a future Dev Diner Twitch stream!

You tilt your head to move Sonic left and right… looks like a lot of fun and a nice way to stay true to the retro Sonic games!

This spa in Brooklyn is using VR and all sorts of things in a new approach to the meditative spa experience.

VR Scout looks more at Scape Technologies, who were bought by Facebook for a reported $40 million US.

Will Apple, Facebook or Microsoft be the future of augmented reality?

TechCrunch say that “while startup insurgents make a huge difference, big platforms may exert disproportionate influence over the future of AR”.

Magic Leap say that “2020 is all about providing more access for developers across the globe: access to hardware, funding, enterprise customers, and support”.

Chrome 81 brings support for the WebXR Device API — the standard for displaying immersive content on mobile devices and head-mounted displays on the web.

There are a bunch of Kickstarter delays due to the coronavirus and sadly, the Tilt Five AR headset is one of them.

This AI could reunite families after an earthquake

This AI tool predicts the safest routes families can take to find their loved ones.

Meet Heidi, the robot who will paint your portrait for up to £20,000

Its artwork isn’t too bad either.

A system created by MIT researchers is aiming to automatically updates factual inconsistencies in Wikipedia articles — at the moment it’s focused on specific sentences but the goal is to develop it to help reduce the human hours required to maintain Wikipedia.

ElliQ is a digital home companion for the elderly and has raised a bunch of money to further develop their tech.

“Security firms are coming to rely on more AI, but we don’t know how things will escalate once the perpetrators of cyberattacks start using machine learning”.

NBA Global Scout is the next step in the league’s partnership with HomeCourt, an app with AR and AI skills training.

Billie Eilish gets interviewed by a robot

Vogue decided to get a robot to interview Billie Eilish.

Music synthesizers, RC controllers, Hackaday say they all likely are microcontroller-based now. Software-defined radio means you get the RF signal to digital as soon as possible and do everything else in software.

Well, some police say that and others can’t say for certain if it led to declines — but some think it is a deterant to crime.

“An Apple patent published today reveals an idea for a system that could automatically detect smart home devices and potentially configure them for the room they’re in”.