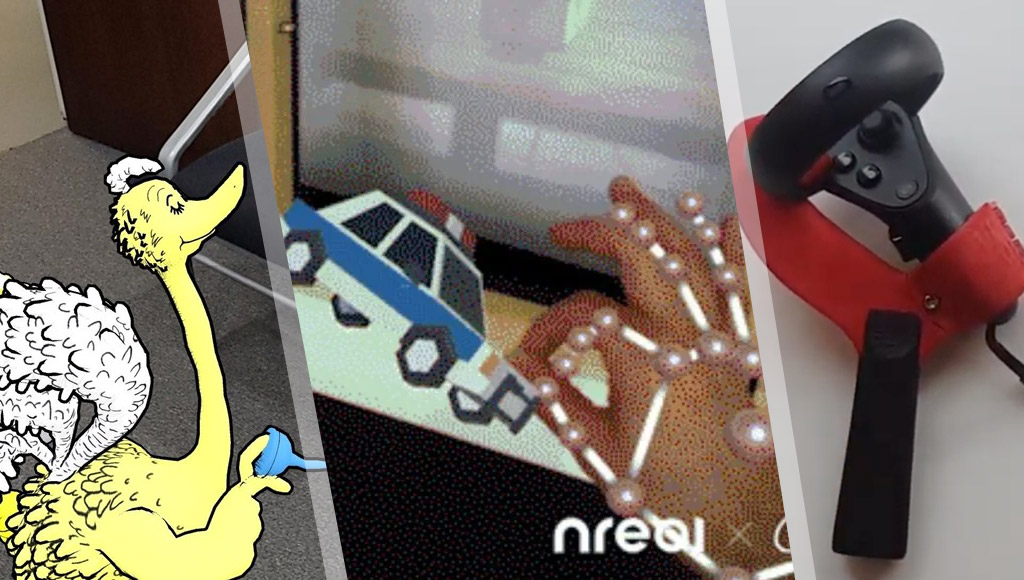 Facebook ‘thinking about’ opening Quest to apps outside the Oculus store

Facebook’s Chris Pruett teased a potential official way for distributing Oculus Quest apps outside of the Oculus Store in a recent Twitter thread.

New HTC Pro Eye bundles are available for businesses looking to get their hands on some VR gear.

VRScout say “the acceptance of modding communities hints to the growth of a collective economy across global creative and innovation-based industries”.

Jumpy Balls is a WebVR game where you have to guide balls shot from a cannon towards a target — it uses ECSY, a new entity component JavaScript framework.

Valve Index VR kits are available once again to purchase.

Apple’s patent application covers a way to automatically adjust lenses for individual users rather than needing to have an initial set up like other headsets.

HoloLens 2: how bad having tried it?

Karl Guttag has some more info on the quality concerns of the HoloLens 2.

Newly revealed images from the US Army show exactly how the HoloLens 2 is being used during training exercises.

The glasses aren’t released yet but are already evolving with new features!

This robot taught itself to walk entirely on its own

“Google is creating AI-powered robots that navigate without human intervention — a prerequisite to being useful in the real world”.

Here’s the file Clearview AI has been keeping on me, and probably on you too

Vice used the California Consumer Privacy Act to see what information the controversial facial recognition company has collected on one of their writers.

It is pretty darn impressive!

VentureBeat look at trends going unnoticed at the moment that’ll have long-term impacts on AI.

Robot learns to set the dinner table by watching humans

First, the dinner table, then the world.

“Researchers managed to amplify nerve signals to the point where they can be translated into movements”.

Commercial bathrooms have to be ADA compliant which means they follow standards giving them a regular pattern which robots could learn. It is trained with a VR simulation of the bathroom.

Create some machine learning projects without needing complicated math or anything along those lines.

This DIY robot can detect fire and then blow it out with a propeller.

DeepMind are proposing “a system of contracts that encourage cooperation among agents in multiplayer zero-sum games”.

What to do if the number of your intents skyrockets

Working with chatbots and voice applications, the number of intents you need to handle can grow pretty wild.

This step-by-step tutorial shows you how to get a Rasa assistant up and running on Alexa.

Alexa can now send traffic updates to your phone

Alexa sneakily gained some new features including severe weather alerts and the ability to send traffic details to your phone.

Spotify may be developing a voice assistant

Attaching an ESP8266 brings this old school A/V receiver Internet connectivity and the ability to have an internet enabled controller.

Sport your hacker status on your wrist with Watchy — an ESP32-powered smartwatch!

Why not have a smartwatch that is truly geeky in every way?

Wear OS could get a big fitness overhaul

It looks like Google are considering a number of fitness-related features for future Wear OS watches (many of which already exist in other smartwatches).

“A self-calibrating, solar-powered cellular tide level and meteorological station based on the Sentient Things IoT Node”.

It’s a tiny version using a NodeMCU board!