This week, we’ve got rumours of Magic Leap looking to sell their business, a data set released for AI researchers to join the fight against Coronavirus, impressive full body tracking tested with Zumba, VR meetups galore, an onsight cube thermal scanner for Coronavirus on an AR headset and more! 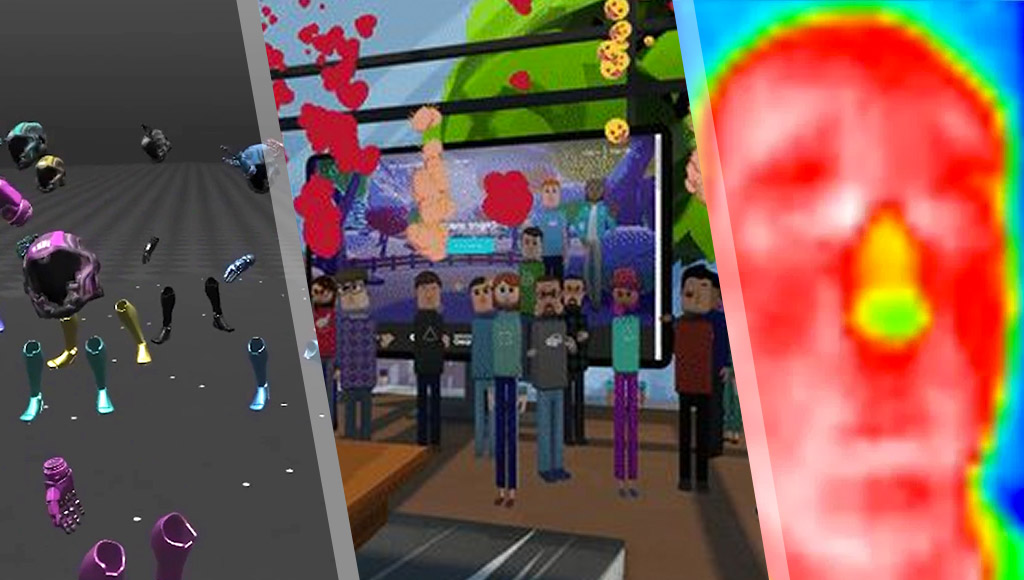 It will enable several browser windows at once, a new home UI and in-app hovering menu panes.

Over 20 titles on Oculus Quest have achieved $1m in revenue

Christmas was good for Oculus, as we’ve heard before.

Some are seeing this point in history as an opportunity for VR to shine with VR conferences.

Stave off those quarantine blues with this easily accessible VR hangout experience.

The CEO of FXG provides a virtual 360 video tour of his community under government-issued quarantine.

They are being replaced by the Vive Pro Eye (with eye tracking) and Vive Focus Plus (has 6DOF controllers).

AWE AR & VR conference still on (for now), with special safety measures in place, here’s what you need to know

The event is two and a half months away, they hope for Coronavirus to be contained/treated by then but say they’ll have a virtual conference option ready in case.

The Oculus Quest could soon see up to a 67% performance increase with a regular software update powered by AI that takes a lower resolution image and turns it into a high res one.

You can now export your Tilt Brush sketches directly to Sketchfab from inside the headset.

Facebook will be hosting an online showcase for upcoming VR titles next week.

Its EEG monitor can then work with VR applications in both gaming and therapy.

“View the universe at cosmic scale, then drill down to the sub-atomic level to look at the building blocks of human life”. Available on Oculus Rift or Rift S, with StreamVR coming later this month.

This was the massive Bloomberg story of the week, Magic Leap denies it. Reports are that Facebook weren’t interested in buying Magic Leap assets.

Most of these options are focused on Magic Leap and HoloLens, but if you’ve got some of those devices – why not put them to good use!

Envision’s iOS and Android apps use optical character recognition and object detection to provide an audio description of someone’s surroundings. It is bringing the same tech to Google Glass!

Very cool! “A new study demonstrates how commercially available head mounted displays (HMD) can be used to simulate the day-to-day challenges faced by people with sight loss from glaucoma”.

It’s not the “Nreal” name that’s changed but their overall company name, and a parent company emerged that apparently hadn’t been mentioned before.

Become immersed in the world of insects and arachnids using the Magic Leap!

“A new wearable hardware-camera-software bundle will enable frontline screeners to check body temperatures without using their hands or thermometers”.

Like TrueDepth, it would enable new kinds of applications and more precise AR on the rear-facing camera like we can have on the front-facing camera.

In the new beta, the Live View button appears as soon as you search for a location.

A data set of more than 24,000 articles named CORD-19 is being released today for AI researchers to join fight against coronavirus!

YouTube warns that it might mess up during this time. It’s definitely a side effect of COVID-19 that I didn’t see coming.

“A psychological theory could kickstart improvements in the way robots are able to walk, thanks to a new study”.

Drones can now scan terrain and excavations without human intervention

New research has allowed AI to take over the human-controlled drones currently being used and it predicts and counteracts the wind forces acting on the drone.

Within nanoseconds, this hardware chip can analyse images and provide the correct output.

“A new study showed that the humans on teams that included a robot expressing vulnerability communicated more with each other and later reported having a more positive group experience than people teamed with silent robots or with robots that made neutral statements, like reciting the game’s score”.

It is quite a landing pad design indeed!

“Voluntary codes of ethics are not enough to protect us from the developers of AI. We need laws that put people in charge”.

“The threat of COVID-19 has spurred the adoption of AI-powered job candidate recruitment and screening tools, despite the risks involved”.

AI is coming for your most mind-numbing office tasks

We’ll soon be getting AI to do all that cutting and pasting for us.

AI is an ideology, not a technology

This Wired article says that at its core, “artificial intelligence” is a perilous belief that fails to recognize the agency of humans.

It says AI is “sparking a third wave of computing” and “comes with positives, like the role AlphaFold can play in discovering cures for diseases, as well as negatives, like AI’s current impact on the criminal justice system”.

Spectra 2020 to now be a fully live-streamed event

Particle’s Spectra 2020 conference is now going to be all online on April 28th and 29th. You can get free tickets and watch from wherever you are!

This microcontroller has come up many weeks in a row now — makers are pretty excited about it! Here’s Make’s look at it.