This week, we’ve finally got Valve’s massive VR title, “Half-live: Alyx” out into the world (it’s getting great reviews!), the new iPad has a LiDAR scanner in it, Magic Leap’s Magicverse AR cloud platform is out and Fitbit Premium is free for 90 days to help you through Coronavirus lockdown! 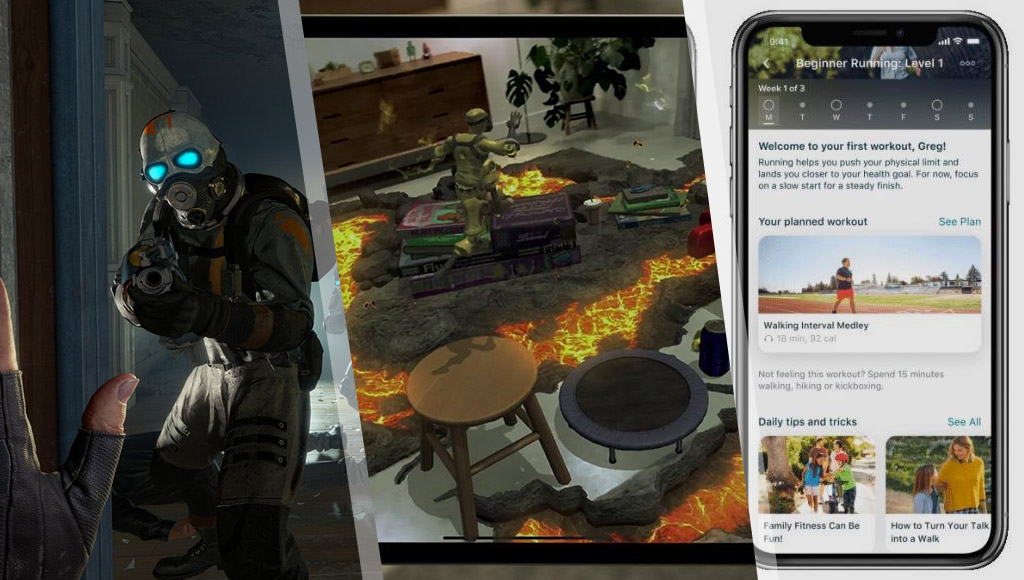 Half-life: Alyx is OUT! The new iPad has a LiDAR scanner and Fitbit Premium is free for 90 days!

Answering those relevant questions so you’re prepped and ready to play Half-life: Alyx, which is out and ready for you to give a go!

‘Half-life: Alyx’ is the flagship VR game we’ve been waiting for

Devindra Hardawar from Engadget is a pretty big fan of the flagship game!

If you’re looking to get some exercise happening in VR while stuck at home — BoxVR is fantastic and you’ll have even more tracks to choose from!

With COVID-19, all those real world VR entertainment spots are closing for a bit — which is probably for the best… sharing VR headsets with someone who is unwell is definitely not a good idea.

The Ghost Howls has a nice list of all the cancelled physical events you can attend virtually in VR instead this year.

There are limited places, so if you’re interested in trying out this arena style game, submit your interest!

The developer behind Space Pirate Arena has a new competitive multiplayer shooting game — they’re looking for people keen to help test too, so fill out that form if you’ve got a Quest and are interested!

Using their proprietary tracking system. They “can turn any space, such as a large gym or a vacant office, into a virtual arena”.

It has what is code-nameda a ‘Jedi’ controller. Not sure what it is for sure yet, but I’m liking the idea of it being a neural armband or some sort of armband tracker to compliment hand tracking.

Facebook: 90% of those who got a quest for Christmas were new to Oculus

Oculus’s Chris Pruett said that “90% of those who got an Oculus Quest at Christmas were new to the Oculus ecosystem”. That’s a lot of fresh faces eagerly trying out new VR content!

“You can now use the 360 video from any camera to create a virtual tour on Google Street View, using GoThru’s new StreetBuilder”.

Magicverse AR cloud is Magic Leap’s exciting release that doesn’t require a headset to be used — it’ll work on iOS or Android apps too.

Nreal’s plan to beat everyone else to mainstream AR glasses

A nice write-up of Nreal and their plans to release $500 AR glasses this year.

Apple has added a depth sensor to the rear camera of the new iPad Pro.

Realising the power of AR: Stefan Alexander of North

10 free books to read if you are keen to do some machine learning study during your extra at home time this month.

“It draws inspiration from the structure and electrical activity of the brain to distinguish between odors”.

“Once inflated, it can change shape and move without being attached to a source of energy or air” — and it retains the same amount of air the whole time.

In the fight against malaria, there’s a new weapon: drones

“A new platform is recruiting amateur drone pilots to offer their services in finding mosquito-breeding hotspots”.

“Moxi is designed to reduce nurse workloads by handling tasks like collecting supplies, gathering soiled linens, and delivering fresh ones, and it’s coming to market during the COVID-19 crisis, when nurses are in short supply”.

Stuart Russell on how to make AI ‘human-compatible’

TechCrunch interviewed this AI researcher on the threat from AI and his solution to that very threat — a change in approach.

AI weekly: how data scientists are helping to flatten the pandemic curve

Never before have data scientists been so very valuable in saving the world as it appears they are during COVID-19!

How surveillance could save lives amid a public health crisis

Smartphone location tracking would be super helpful but also a super big breach of privacy.

This robot limb aims to rebound like natural physiology for much better movement.

“Facebook announced a program that will connect its developer partners with governments developing chatbots to track the spread of COVID-19”.

If robots steal so many jobs, why aren’t they saving us now?

An interesting question posed by Wired… “We’ve been led to believe that robots and AI are replacing humans en masse. But this economic catastrophe is blowing up that myth”.

Enhanced POET is an algorithm that creates and solves its own challenges to train AI agents. How self-sufficient!

This project aims to build a DIY smartwatch with long battery life, not a lot of features or sensors. Initially with its own software but they’re looking to get it to run the Rebble operating system (the same they’re going to run on old Pebble watches) at some point.

A quote from the article which I thought was kinda funny — “When I asked Alexa, ‘Should I take a COVID-19 test?,’ it recommended a voice app called Egg Test that helps you understand whether eggs in your refrigerator are still fresh.”

Apple’s Siri helps Americans wondering if they have COVID-19

Siri appears to be doing a little better at the moment.

Fitbit has made its paid-for service, Fitbit Premium, free for 90 days to help people stay healthy during the coronavirus lockdown!

The ESP8266 is about six years old now, here’s one of its next iterations!