This week, we’ve got a new Boston Dynamics robotics video that’s creeping people out, Starbucks announced a virtual assistant who’ll be able to take your order on their app (and your Echo!) and you could get your very own open-source desktop robot arm! 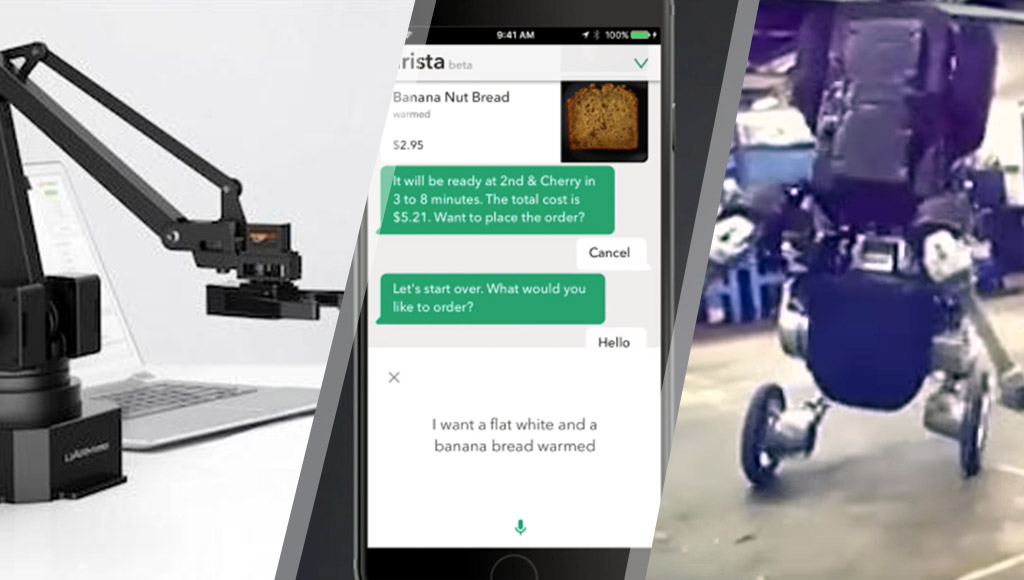 What an interesting world we live in…

No matter where in the world you’ll be on April 29th, if you’ve got an Internet connection, you’ll be able to attend this event! The online developer conference, AI With The Best, is a great one and we’ve got discounted tickets at the link above (or use the code WTBVIP).

If you’re in the Asia-Pacific, time’s running out but you can still enter the online hackathon and win $5-10k!

I’ve put together a guide on how to make your own custom travel case for the HTC Vive, very useful if you travel a lot with your VR headset!

Oculus’ Palmer Luckey was found to have breached a non-disclosure agreement with ZeniMax. Oculus plan on appealing the decision. Luckily it’s nowhere near the $4 billion ZeniMax was hoping for…

The Rift might be able to handle roomscale a bit better with this update.

Annie Harper and the team at Devika have been doing great work finding a VR solution to reducing unconscious bias around women’s role in the workplace.

3 numbers to know when someone says “VR is a fad”

A comparison of the numbers between Gear VR and early iPhone adoption.

Can we build for diverse audiences with VR? How should we do so?

An open-source keyboard to make your own

Looking to add a VR keyboard to your apps? Here’s a new open source one.

New LCD tech could give us sharper VR displays

This is actually pretty neat and could improve all sorts of displays.

The AR helmet that pinpoints danger with heat maps

This AR helmet gives you heat map vision. It’s a really good use case for augmented reality and could save lives.

It will recognise landscapes and augment them in particular, rather than just add overlays like snow or rain. Pretty neat!

The battle for AR is heating up, in a more lame way… patent filings!

If only we had interactive gyms back when I was in school! Yay augmented reality gyms!

‘VertoStudio’ is a 3D modeling studio for Windows Holographic

Looks like it’s almost a certainty by this point that Jawbone is leaving the consumer market.

One designer’s exploration of designing for the Apple Watch.

A patent for charging your watch as you wear it.

MIT’s smartwatch app can track your emotions during conversations

It listens to your conversations and speech patterns… etc.

It does look a little creepy, and is especially so considering that these robots are likely to be used in future military conflicts… Here’s another video.

They are also introducing a Starbucks Reorder Skill for Amazon Alexa.

The many tribes of artificial intelligence

There are a lot of different tribes in artificial intelligence! A crazy amount of them… so many approaches!

This could be hugely beneficial over time.

A look at building DIY surgical robots to help with healthcare.

uArm Swift is an open-source robotic assistant for your desktop

The open-source robotic arm for your desktop that you didn’t know you needed till now!

If you’re keen to have Google Assistant on an unofficial Android device, this is a way you’ll be able to do it.

Are we destined to fall in love with androids?

Will humankind end up getting intimate with robots?

Always been curious but unsure about the whole beacon thing? Have a read!

This charge cable has LEDs that animate in a really neat way!

A Delta 3D Printer built out of a coffee maker

This is incredibly ingenious…

Fake cases for your Raspberry Pi – make sure you don’t end up with one!

There are a bunch of chinese knockoffs, here’s how to spot the difference.

It’s coming to devices soon, but Bluetooth 5 is on developer boards now.

A Raspberry Pi-powered recipe manager for your kitchen!

How to use inductive touch sensors: TI’s new development board gives a needed update

A bit more technical but could be a neat, new way to do buttons.

Got spare space in a locker? Why not make an Arduino-powered soda locker?