This week, we had a bunch of exciting new VR headsets revealed, VR also got a bit easier to afford as Oculus dropped its prices and Vive introduced a new payment plan. We also had news of a very poorly secured children’s toy and one tinkerer explains how you too can run Windows 98 on your Raspberry Pi! 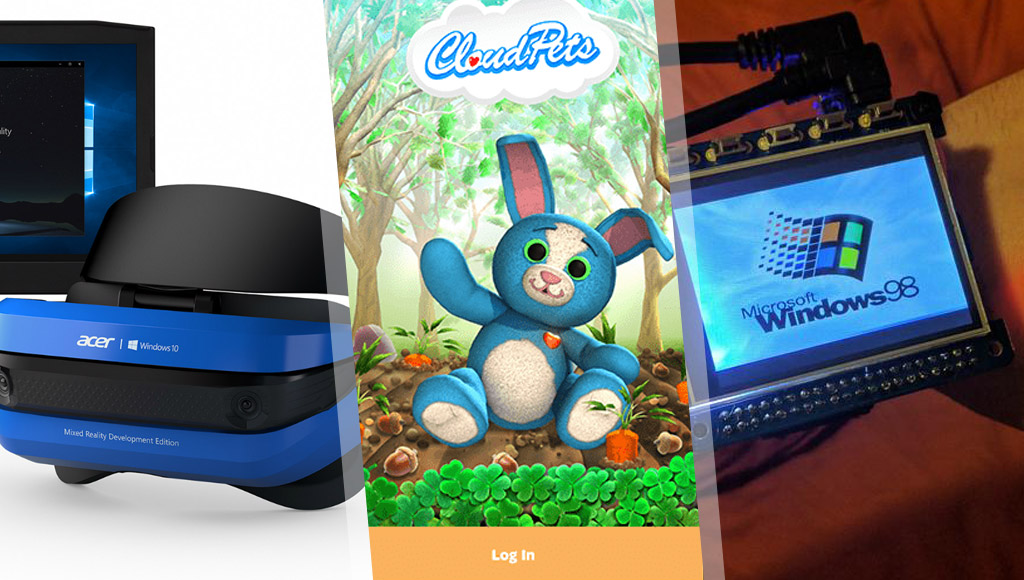 Sometimes conferences can be tough to get to. Luckily, this one is much easier to attend than most! You can attend without leaving your house! The online developer conference, AI With The Best, is on April 29th and we’ve got discounted tickets at the link above (or use the code WTBVIP).

The headset has inside out tracking (no need to place trackers in your room) and has the ability to flip up when you’re not using it. They seem to be shipping, but the only place I could find to register interest is here. Microsoft’s VR platform is also supposed to appear on Xbox next year.

New US plans mean that for $66 a month & no-interest financing for 12 months, Americans can get a Vive with less of an upfront cash commitment.

Charting the course for mobile VR

He believes that “hardware features such as wireless, while desirable, simply add to the cost of a product that is already considered too expensive”.

Srushtika Neelakantam and Tanay Pant, both friends of Dev Diner, have put together a book on learning WebVR and it’s available for pre-order!

59% of VR devs use Unity, but devs have made more money with Unreal.

What is Magic Leap really?

This is a fantastic look at what Magic Leap’s first headset is likely to be and why. Nice piece on AR overall.

HoloLens is appearing in all sorts of places now!

Alex Kipman insists HoloLens leads the way, others do not have what it takes to compete in mixed reality

He thinks it’s going to be tough for others to catch up.

Fitbit say the Alta HR is the slimmest wristband with a pulse tracker.

Fitbit shipped more devices in 2016 than any other vendor

This is paired with an “all-time high” for global wearable shipments. Promising to see news like this, compared to the usual doom and gloom!

This is the aforementioned news that the Fitbit news above is paired with! News around the impending death of wearables may be a little premature if this report is correct.

How to telepathically tell a robot it screwed up

They won’t be able to exceed 10 miles per hour or weigh over 50 pounds, but they can be autonomous. This is a huge step.

Sounds both promising and worrying at the same time!

Chatbots can now be set up with solely a menu for interaction, for times when typing isn’t too convenient.

This is a fascinating and great real world use of AI to make life better!

I’m actually not sure if I’m keen on this idea. Didn’t we all just manage to start convincing businesses to have people on the other end of the line?

Can an app that lets strangers — and bots — become amateur therapists create a safer internet?

A look at using emerging tech to identify people in need of support.

Facebook are approaching the same concept as the app above. Good to see attempts to improve the situation, I just hope there’s a way to filter out false positives and do this with extreme care.

Countering the dismal state of security in the Internet of Things

A true network security pro took some time to share his thoughts with me on how we can get much needed security into our IoT applications.

Troy Hunt looks at this in great detail. This is a perfect case of how NOT to do the IoT.

You can avoid voice control and instead see it visually in the app.

Mastercard is experimenting with ways to advertise on the IoT.

It apparently doesn’t run too fast but it’s impressive that it runs at all!

Bringing the IoT and augmented reality together!

Moocall adds pregnant cows to the Internet of Things

This isn’t an area I saw coming in the evolving IoT ecosystem.