My plea to AR companies – be honest

I am a huge fan of augmented reality and the immense potential that lies within the platform. The idea of projecting and interacting with anything imaginable in front of our eyes in real time is exciting. There are so many absolutely wonderful possibilities just waiting to be unleashed!

There will be a day when this technology is commonplace. Right now, we are at the exhilarating moment where we get to explore an entirely new technology and reveal its potential to the world. That’s a fantastic place to be.

Right now though, I’m concerned. I’m concerned that companies are not being open and clear enough about the limitations of the current technology. The limitation I’m speaking about in particular is the limited field of view. From my conversations with others and my readings online, I’m not the only one who shares this concern.

The Field Of View Limitation

For those who haven’t come across the field of view limitation, augmented reality headsets like the Microsoft HoloLens and Meta Glasses are not yet able to project images to your full field of view (potentially Magic Leap too?1). At the moment, these headsets project the images to a specific area in the centre of your view. It is like having a transparent screen in front of your eyes. When you look at a spot which should have augmented content, it will appear within that frame of view.

I completely understand the field of view problem. Technology just isn’t quite there yet. That’s totally okay. It seems common amongst the current players in AR headsets. What I am concerned about is that augmented reality is being shown to people without mentioning this limitation at all – Microsoft’s HoloLens announcement and demos in particular! Microsoft show images like this in their demos: 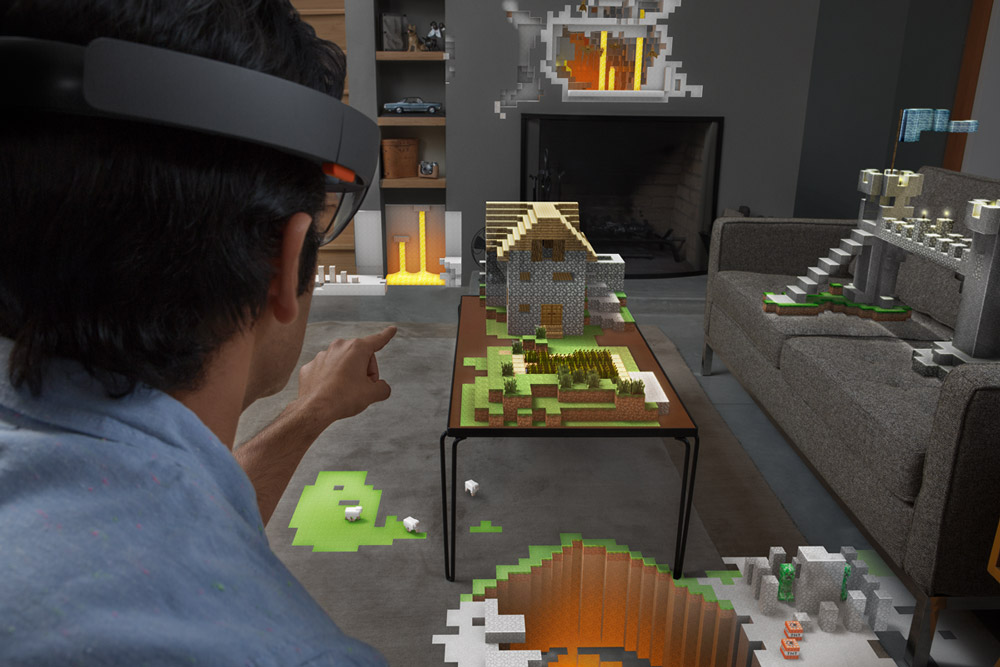 I understand wanting to visually show the effect of an immersive experience. I think it’s reasonable to have that in a concept video for technology. However, the live demos they’ve shown at key events show the experience to the audience as one that goes far beyond what the device can actually do too. Many tech blogs and sites were surprised when trying the device and discovering this limitation. If tech blogs and journalists are surprised and slightly disappointed – consumers will be too.

When consumers give augmented reality a go for the first time, expecting that wonderful experience, they get a view like this:

That GIF is thanks to this article at Polygon. You can see a bunch more in the article too – it’s a really good read. Basically, that GIF comes from screenshots of a more recent Microsoft video which shows the technology capabilities in a much more realistic way. Please Microsoft, Meta, Magic Leap (if your mysterious tech shares the limitations) – we need more of this!

This Limitation Isn’t Going Away Soon

During E3 after widespread questions about the field of view, Microsoft executive Kudo Tsunoda made it clear that the issue wasn’t likely to be solved by the first iteration of the HoloLens:

“I think you’re never going to get to full peripheral field of view, but certainly the hardware we have the field of view isn’t exactly final. But I wouldn’t say it’s going to be hugely noticeably different either.”
– Kudo Tsunoda during E3 in 2015

Gamers Are Already Likely To Need To Wait

Even more surprisingly, Satya Nadella told ZDNet that HoloLens version 1 is going to focus on the business/enterprise market. That market will not lose out as much from a non-immersive augmented world compared to gamers. That’s a fine strategy and makes great sense, however that’s not what the marketing I’ve seen has been focused on. People I speak to refer to the Minecraft demo and the lounge room demo – both of which will likely work on version 1 but in a less effective way with the limited field of view. Gamers at E3 were already clearly a bit disappointed.

Developers of AR apps – some of the responsibility lies with us as well. As a proud and very excited Meta pioneer currently trying to experiment and put together my own augmented experience for the device, I’ve realised it is my responsibility to discuss, showcase and design for the technology in a realistic way too.

All I’m asking for can be summarised in two words – Be honest. Please don’t raise expectations beyond what the technology is capable of.

I worry we will reach a point where the mainstream’s learned reaction to AR will be one of “AR glasses aren’t that great” or “not as good as I thought they’d be”. Early negative stigma can really affect its adoption. The companies out there building these AR devices are the custodians of goodwill towards the technology. I worry that the approaches they take now will have lasting effects on the industry.

Those are my thoughts on it all, I’m sure others might disagree or have potential ideas for how to improve how we promote and talk about AR headsets. I’d love to hear those opinions! Feel free to tweet at @devdiner or comment below with your thoughts on all this 🙂

1Magic Leap’s patent application doesn’t provide too many clues on their field of view but seems like it could be a bit better? This review from the MIT Technology Review comparing the Magic Leap to the HoloLens made it sound like the Magic Leap did not have as much of a field of view problem (it instead had a gigantic prototype form factor that is too big for current mainstream use problem).

I completely agree with your advice. If you’re not honest, you’re going to pay for it. The big issue is how EVERYONE might end up paying for it if the general public decides AR is a big disappointment.

AR has SO much potential. It could help us appreciate the REAL world in a way technology hasn’t allowed us for a long time (now that the main thing technology has done to the general population is get them focused in on screens to the exclusion of the real world around them).

I really hope that the major players in this field change their approach before it hits the mainstream. Developers and tech enthusiasts may be somewhat understanding of the overselling. I don’t think the general public would be as forgiving.