If the reports around the web are to be believed, it is likely that Snapchat is experimenting with their own attempt at augmented reality glasses. A lot of these reports say that this is an absurd and terrible idea on Snapchat’s part. Here’s why I don’t think it’s THAT bad of an idea.

Update: The first generation of Snapchat’s glasses plan has been revealed! They’re calling them “Spectacles” and they are very much like the first option that makes sense that was mentioned below — a Bluetooth-enabled camera (also works over Wi-Fi) that can post directly to Snapchat. Some interesting points to mention — they use a 115-degree angle lens, which is closer to our eyes’ natural field-of-view. It records video that is more circular, like human vision (more like a fish-eye lens). Pairing this with a pair of glasses could be a fascinating way to best capture someone’s own viewpoint in a video. It also appears to be just like the Narrative Clip — requiring a tap to start recording.

It also appears to try to get around the stigma of people not being able to tell if they’re being filmed, by having a circle of lights light up around the lens on the glasses. That’d be harder to tape up, I just wonder how long until there’s a hack to stop those lights turning on (or people just remove them?).

The main disappointment for an emerging tech guy like me — no mention of augmented reality or filters. So far, they appear to be simple sunglasses with cameras attached. My guess is that’s something they’re working to add in the next generation if this experiment works out? 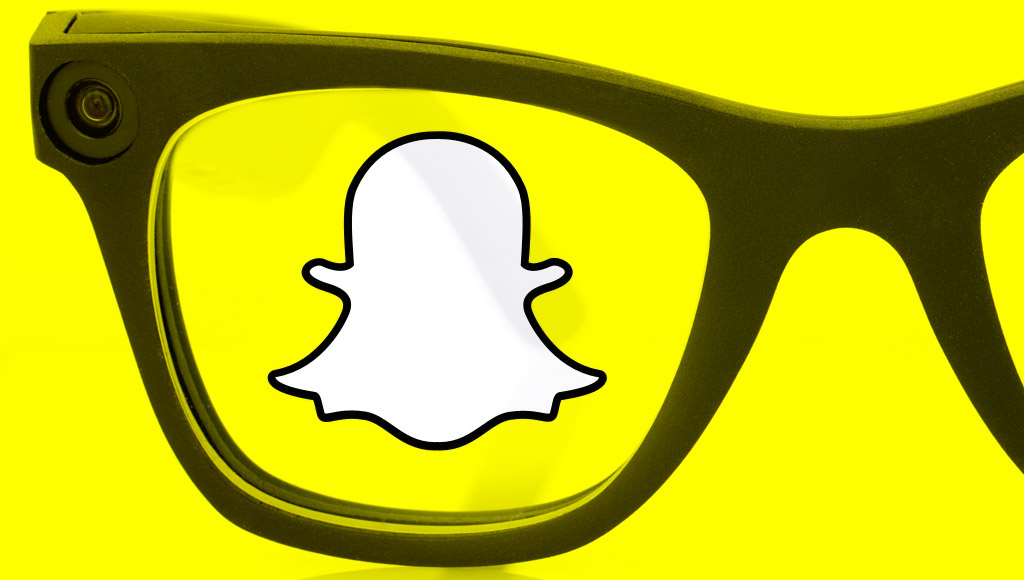 Snapchat AR glasses aren’t really that bad of an idea.

If the image in this article is anything to go by — the Snapchat co-founder and CEO, Evan Spiegel, may have been wearing a pair of prototype glasses on his vacation with Miranda Kerr. The glasses in that photo look similar to the Epiphany Eyewear developed by Vergence Labs, a Google Glass-like startup that Snapchat acquired in late 2014. Recently, they also joined the Bluetooth Special Interest Group that runs the Bluetooth wireless standard and registered for a unique company identifier. A sure sign that the company is going to be releasing hardware of some sort that is Bluetooth-compatible.

They’ve also been hiring some rather particular talent:

“Snapchat has hired electrical engineers, marketers and product managers from hardware start-ups such as Ring, which makes a doorbell with wireless video, Canary, which makes a home security camera, and Sphero, the robotics developer behind the hit Star Wars BB-8 toy, as well as Oculus, the virtual reality headset maker owned by Facebook.” – FT.com

“A former recruiter for HoloLens, […] an engineer formerly working on Qualcomm’s augmented reality software Vuforia, and an eyewear designer who previously worked for Michael Kors, Innovega, and Zac Posen” – Fortune

So, they’re tinkering with this stuff. I think there are a few areas which it makes total sense for them to be getting into with all this.

Snapchat has changed drastically from its beginning

Times have changed drastically from the early days of Snapchat where its key feature was that pictures would delete upon being seen. Now, Snapchat allows people to replay snaps (only once a day and only the last one you viewed), it’s common knowledge that people can screenshot them (Snapchat will often tell you if someone does so to your snaps though) and “memories” even allow you to save your own snaps to keep a personal record of what you’ve been snapping. Overall, the platform has shifted to a new focus — filters and stories.

The filters bring augmented reality (AR) into the mix, allowing you to have your face transformed into various characters and styles as a bit of fun (occasionally drawing criticism for some inappropriate filters too). Filters can look like so:

A variety of Snapchat filters I tried on as important research for this article.

I believe some of the wild hires in the space of augmented reality may have been initially working on the filter aspect of Snapchat. However, I don’t think Snapchat’s plans end at silly filters — though they are incredibly addictive and viral, and have brought many newcomers to the platform. I believe Snapchat is using these just as Microsoft is using their “How Old Do I Look?” web experiment — to train up their systems and get better at real time AR. These filters are learning how to interpret the facial expressions of a worldwide audience every day. That’s a lot of sample data.

This is an aspect of Snapchat that many didn’t quite understand when it first was released. Stories keep a public snap available for your friends to see for 24 hours in a chronological timeline. Your friends can click your username and watch a series of photos and videos (to a max length of 10 seconds) that show what you’ve been up to over the last 24 hours. This has been successful with the masses on Snapchat but it also lured in a whole new target market — entrepreneurs, thought leaders and vloggers (video bloggers).

People of all ages have been joining Snapchat and using it as a way to effectively engage with their audience in very short snippets. Stories now feature people of all ages talking to their audience, sharing advice in a range of topics (entrepreneurs talk about their day to day and lessons they’ve learnt, beauty bloggers share their tips, media sites share the latest headlines… etc). It’s like a sped up version of TV for an era where we’ve all got incredibly short attention spans — and it works. Snapchat has been bringing people huge amounts of engagement amongst their audiences, people actually do watch them! A huge difference to other social media channels where content is often scrolled past super quickly.

So with these two main areas of focus, Snapchat is working on augmented reality capabilities and on sharing the day to day lives of its users quickly, easily and effectively with their followers. There are plenty of potential ways that hardware fits perfectly into this. Here are some potential options I could see them putting together that make sense:

I own a tiny device called a Narrative Clip. It’s a small wearable HD camera that I enjoy explaining to security staff at airports. Basically, it clips to my outfit and takes a photo automatically every 30 seconds or so (you can adjust the interval). I can also double tap it, and it takes a video. It is configurable over Bluetooth with my phone and uploads those photos to the cloud over my Wi-Fi. It’s great for taking photos of holidays, lifelogging and keeping a simple log of your movements throughout the day. It looks like so: 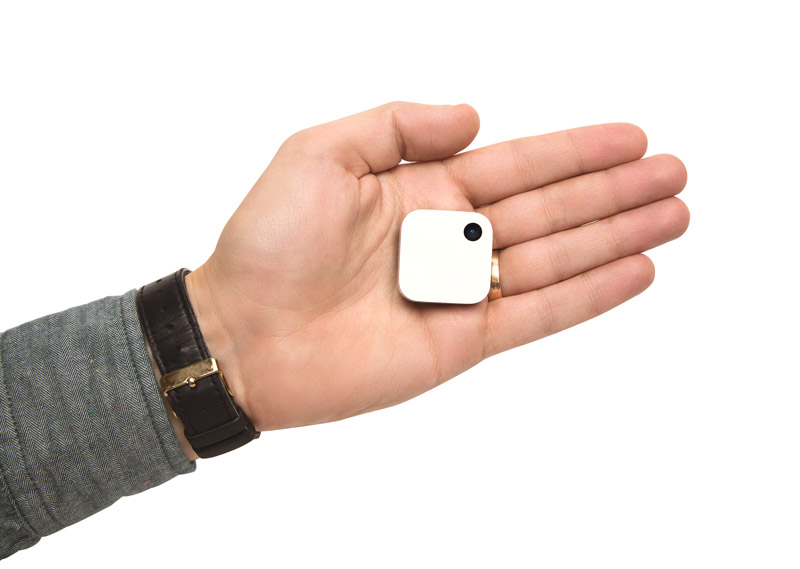 Basically, it’s a really neat device and you should get one! While it’s not totally useful when all you’re doing is sitting at the computer all day, it can be super valuable when you’re out walking in nature or exploring a new town. Now, imagine if I could take the best of those photos and automatically share them to my friends in a way where they’re already used to having super quick updates of my day? Better yet — imagine if I could take a quick photo or video by tapping a small camera and upload it directly to my Snapchat story. That’s something I believe Snapchat has to be seriously considering.

Bluetooth-enabled sunglasses with a camera

Chances are, with the hiring of an eyewear designer and the purchase of Vergence Labs, they’re looking to build the camera I mentioned above — but inside a pair of sunglasses. Maybe it’ll be voice controlled? Maybe via tapping the side of the sunglasses? It wouldn’t even need an interface, just like the Amazon Echo or the Narrative Clip. The Epiphany Eyewear frames did not have an interface and recorded content after a button press on the frame, they looked like so:

At the time they acquired the technology, it made no sense:

“This is a strange acquisition since Snapchat makes an app for sharing photos and messaging. Its photos quickly disappear. Perhaps it has good technology for converting video files. Perhaps it has talented engineers.” – Business Insider

Today, it’d give Snapchat users an incredibly easy way to share photos in their story without needing to get out their phone.

They could take this a step further and do one of two things — bring an interface into it similar to Google Glass for users to navigate the device, or try to go all out and make it more like the mixed reality of HoloLens or Meta Glasses, placing virtual objects into the real world. Their work with filters and augmenting reality would fit really well with a headset that could allow snappers to change how reality looks around them and share that with their friends. It’d make it a lot easier for people to post on the platform! It’d be even better if they could watch their friend’s stories and responses in the display too.

The main concerns with Google Glass were very specific — it looked dorky to the public and people really didn’t like having cameras pointed at them. The first concern might be alleviated with the Epiphany Eyewear frames, as they look more like regular glasses. However, the second point would be incredibly hard to counter — not only would people be taking photo and video of others but they’d be posting it out to the public. Privacy concerns will need to be sorted out somehow, either with a very clear light showing the user that they’re being filmed (if the glasses are black, how hard is it to tape over that light?) or some other obvious sign to the world around them. Without that, these glasses are likely to be unusable for Snapchat aficionados unless they stick to using it while out in nature and away from public places.

If they can’t find a way of making it socially acceptable in the form of glasses, there’s every chance they could fall back to the Bluetooth-enabled wearable camera concept like the Narrative Clip. Maybe they already have?

Snapchat making augmented reality glasses isn’t a bad idea. It actually would serve its audience really really well when it comes to bringing a fast and easy way to share story content. If Snapchat finds a way to make this idea socially acceptable, they could be onto something huge. Even if it doesn’t totally work, they could even adapt what they learn to emerging headsets like the HoloLens, Meta Glasses and Magic Leap. They’d already quietly introduced augmented reality to the mainstream with their filters before Pokémon Go was even a thing. The fact that Snapchat is already strongly thinking about emerging areas like AR could be a sign that they’ll be here to stay for the foreseeable future.