Oculus forward-compatibility got my attention at OC6

At Oculus Connect 6, Mark Zuckerberg announced a focus on building forward-compatibility into all future new Oculus devices. It was mentioned briefly. Without the same wild cheers from the audience as other features. Here’s why I believe this might be one of the most valuable things announced at the event from a developer perspective. 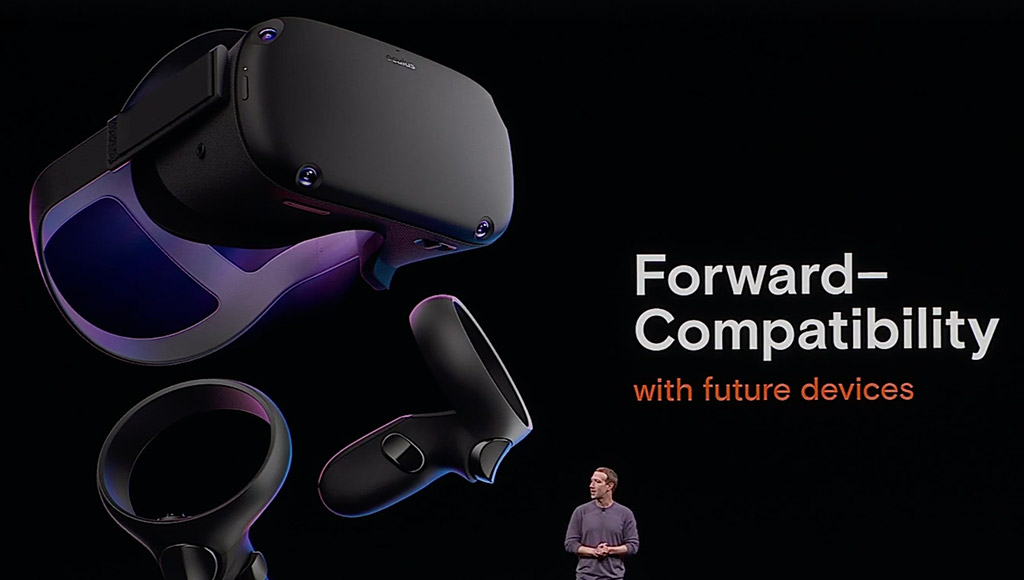 Oculus announced a whole slew of unbelievably exciting things at Oculus Connect 6, from hand tracking coming to existing Quest headsets to being able to link up your Oculus Quest to a VR-ready PC to pretty much turn it into a Rift headset. For me, it was actually one of the most exciting events they’ve had because so many of the announcements didn’t require a new hardware purchase. They work with what’s out there already. That’s huge.

The biggest news though, for me, was their focus on forward-compatibility. That isn’t as glamorous as their whole new social VR world or their massively improved optics in their Half Dome prototypes. But when it comes to day to day building and maintaining great experiences for VR — I think it’s underestimated how much this could help spur on more VR development around the world if Oculus manages to achieve this.

“To get to critical mass, we’re focused on building forward-compatibility into all the new devices that we build so that all the content that you’re all making just works across everything now and going forward.” — Mark Zuckerberg at Oculus Connect 6

“So the goal is that if you develop something for Quest today, then our goal is to make it work on all future Quests as well. And that means that when you buy a Quest, that you’re not buying something that’s going to be locked in time. That as all the new content is built for the future, it’s going to get better, and also as we deliver major software updates the platform is also going to dramatically improve and that’s going to be a big theme of what we want to talk about today.”

I’ve spent hours and hours debugging compatibility issues when building for VR/AR. New versions of platforms break a whole lot of things sometimes. My sanity would greatly appreciate this process being easier. It goes beyond that though.

The ease of picking up a platform and working with it will hugely affect how many good quality applications are out there for it. In trying to develop for the Quest, I’ve spent time sifting through tutorials, blog posts, forum posts… etc where the advice is often outdated. Oculus’ SDKs change and rework things. That makes picking up the Quest and just developing for it a challenge.

If Oculus is serious about their forward-compatibility goal — that challenge might largely fade away. Tutorials might not go out of date so quickly. New developers can flock to the platform with more confidence. They can get started and build without hurdles. Without the fear that they’ll have to rework everything in a few months. That is massive.

The baseline for quality rises when a platform is easy to pick up and when the SDK is more stable.

It won’t be easy

Forward-compatibility is a big challenge. It’s something that Microsoft spends a whole lot of time with when it comes to Windows updates every year — they invest time trying to ensure that the Windows platform stays somewhat compatible with a range of hardware and software out there. It’s a really hard thing to achieve but I think Microsoft has managed it to a degree.

Oculus has an advantage — they’ve got control of the hardware side of things. They don’t need to ensure every hardware vendor is on the same page. However, I do hope they extend their platform to other headsets manufacturers one day.

The next thing I’d love would be cross-platform compatibility. It’s all well and good that Oculus apps will continue to be compatible with new Oculus headsets into the future, it’d be nice for them to also be compatible with other platforms too. The day when a developer can easily build once and export for the HTC Vive, Playstation VR and all sorts of other platforms… what a glorious day that would be. However, the challenges involved in achieving that are even bigger and messier, so I’ll take forward-compatibility with Oculus devices as a solid win for now.

To the Oculus team, thank you for your hard work on this. Both now and into the future. The software engineers who’ll be working to keep forward-compatibility — know that your work is going to make a huge difference, especially as the VR developer community grows.