Have we properly considered personal space in virtual reality?

There is a level of basic personal space which is understood in VR. You don’t want things floating in people’s faces constantly or information too close for people to focus on. However, what about the personal space we each prefer from a more unconscious level? A cultural level? Are we designing our environments from a biased perspective that suits our own personal space but does not consider others? How do we accommodate for differing levels of preferred interpersonal distances? 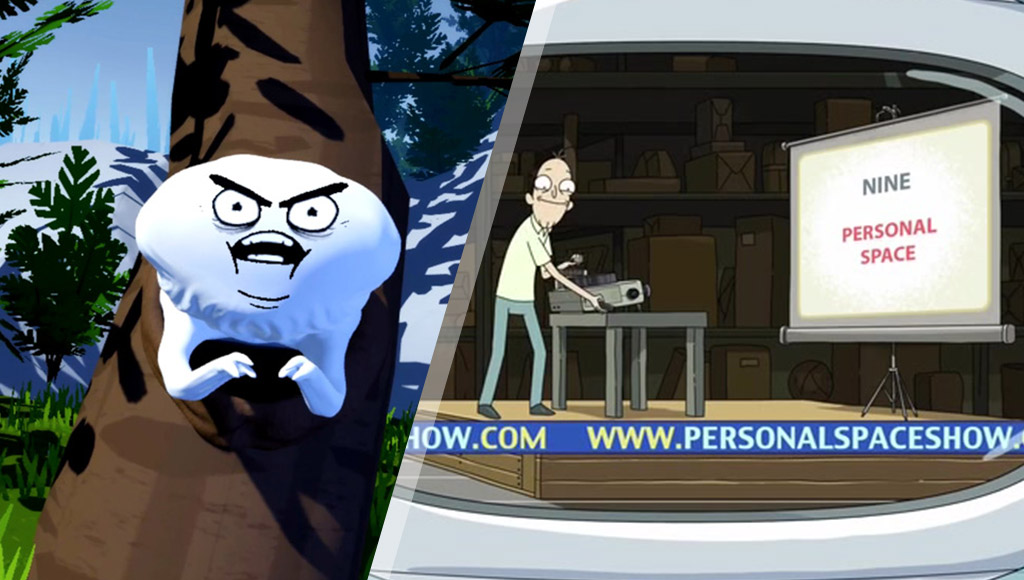 There is an unintentional Justin Roiland theme here.

As far as I can tell, this is an entirely new factor to be considered when building applications — when building a desktop or mobile app in the past, we weren’t really concerned with having elements interfering with people’s personal space. Clippy was a tad annoying but he was still safely behind that screen — that barrier that we’ve grown used to with technology over the years. That’s precisely the barrier that disappears with virtual reality. As VR starts to expand around the globe and devices reach more households, we are going to need to approach the complex factor of personal space and design experiences that take this into account.

Whose personal space are we designing for?

Everyone is different when it comes to feeling comfortable with how close people are to us. Earlier this year, the Journal of Cross-Cultural Psychology released a study that looked at the differences in “preferred interpersonal distances” around the globe. It turns out that culture is a pretty big factor in how close you’re comfortable with people getting to you.

Their study showed participants an image of two people and asked them to show the minimum distance they would need to have between themselves and another person in order to feel comfortable during a conversation. They had three types of people to consider — a stranger, an acquaintance and a close/intimate friend. The results showed different cultures had different preferred interpersonal distances: 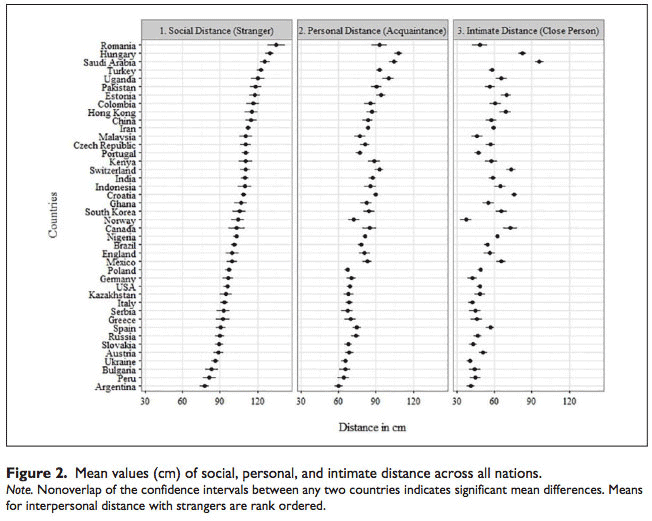 A graph of their findings for preferred interpersonal distance

Countries like Romania, Hungary and Saudi Arabia preferred strangers to keep their distance, while Argentina, Peru and Bulgaria were more comfortable with strangers getting a bit closer. Countries which prefer strangers are a bit further away from them also seem to prefer friends to be further away overall (with a few exceptions). Cultural norms weren’t spotted only amongst nations — gender and age also affected the preferred interpersonal distance:

“across countries, women tended to prefer greater distances from the other person, as did older participants” — Christian Jarrett reporting on the study

Personal space is a factor in VR

A study on “Personal Space in Virtual Reality” at York University seems to show that personal space is indeed just as sacred to us while we are in virtual reality environments:

“Subjects exhibited significant negative reactions to violations of interpersonal space in stereoscopic 3D displays, which were equivalent to those experienced in the natural environment” — Wilcox, Allison, Elfassy & Grelik

Interestingly, personal space seemed to be more of a factor when it was images of people invading the space rather than images of objects — so this could be more of a concern in social/avatar style situations where people are interacting with a character or avatar. While the study compares the effects of violations of interpersonal space across virtual and real environments, it doesn’t appear to have examined potential cultural differences. It’d be fascinating to see whether the cultural differences found above are indeed replicated in a VR environment! 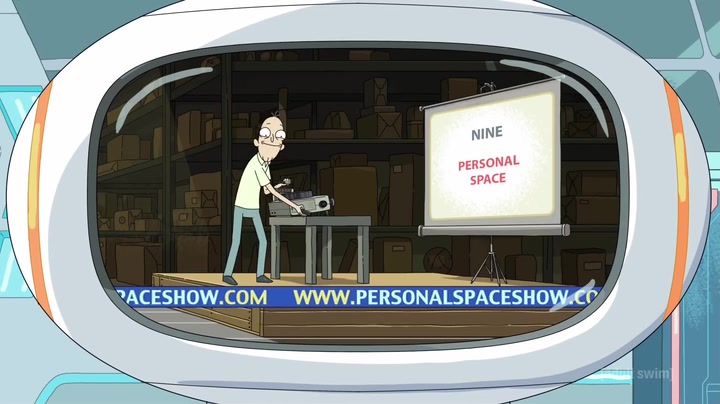 Phillip Jacobs from The Personal Space Show in Rick and Morty cares about his personal space. (I’d say NSFW if you go Googling it)

How can we approach personal space in VR?

Here are some approaches which I think might help us build virtual reality applications with personal space in mind, if you’ve done any of these or have your own approaches, I’d love to hear them!

Playtest your VR environments and scenarios with a range of people of different backgrounds, cultures, ages and tech-savviness (get people who aren’t hardcore VR people!). Keep an eye on how each of them reacts in terms of personal space. Are they stepping backwards to add distance between themselves and an avatar in the environment? Are they moving closer? Take notes!

Consider the type of avatar

The type of character could also make a difference in how people will react. A first-hand experience I’ve noticed a few times is the white bunny in “Invasion!”. This is one of my favourite VR stories and one that I show many people as one of their first VR experiences! The bunny gets quite close to the player at one point and I’ve seen family members move their heads back when it does. However, they seem to forgive it almost instantly because it is a cute animal. There are parallels to the real world here. People are a bit more willing to allow a cute pet to come up close than they are a random stranger coming up really close! So keep this in mind too — might your avatar get away with coming close? See how people react to them. Also, don’t just test one of the characters in your VR application and use the findings for all — different avatars might make people more/less comfortable and need different distances. 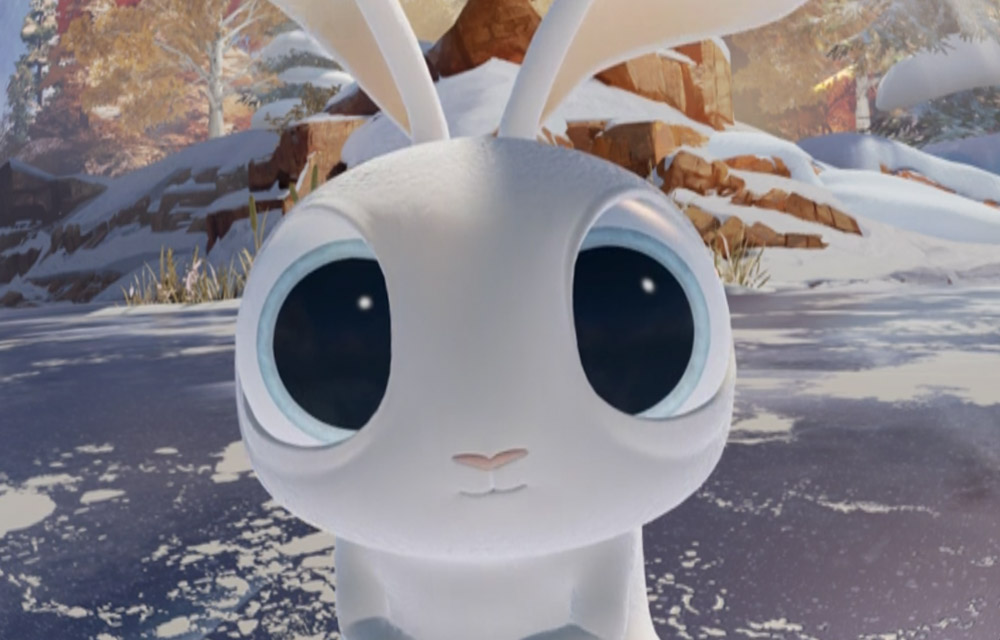 The bunny from one of my favourite VR stories, Invasion!

If you’re prototyping a VR app with people around the world that you can’t have in the room with you, maybe try adding some subtle reporting in your app that’ll measure how close people are to your other characters in the scene — both initially and after a few seconds. Do they always move back? Are you expecting them to? Unless this is a horror game of some sort, chances are you aren’t wanting to be startling people or causing them to feel uncomfortable. Of course, be open to participants about the fact that you are recording data on how people use the environment.

Observe the real world. You’ve got ample chances to see real people and how close they get to each other when they interact. Keep an eye out and take mental notes of how close different ages, genders and cultures around you seem to position themselves. The more you observe this, the easier it might be to get a feel for a good starting point in your own virtual environments. Just keep in mind that there could be cultural differences you don’t see in your own town/country, so you don’t want to rely on observation alone.

In the incredibly random VR experience of “Accounting”, the character who comes out of the tree to yell at you isn’t directly beside you. He’s purposely further away from where you are initially placed in the scene. If placed right beside the player’s initial position, that character would have startled and intruded on the player’s personal space for sure. So consider the situation at hand too. If the character is loud or gesturing wildly, that’ll affect how close you’ll feel comfortable getting to them. Just like in real life. 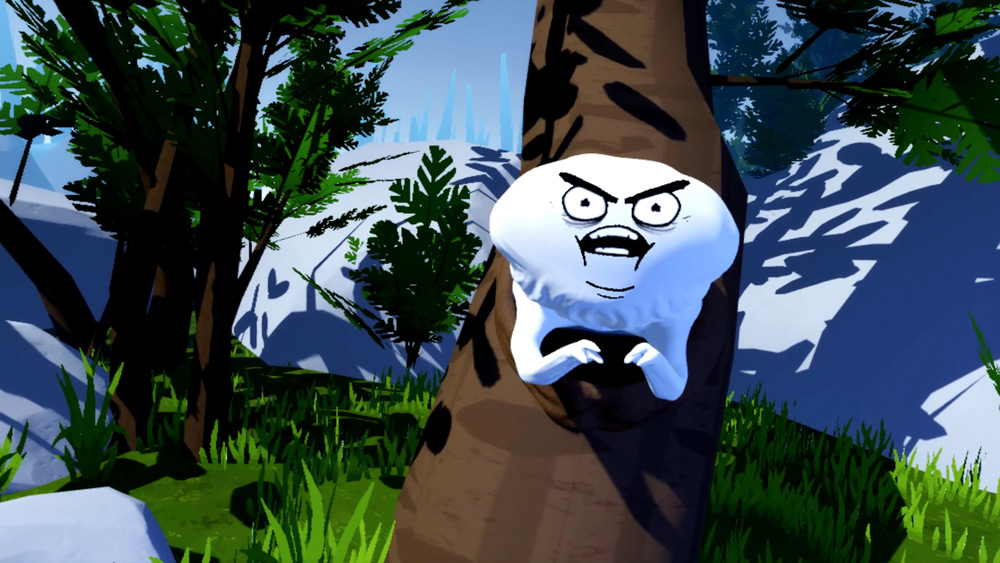 One client I worked with had filmed a series of 360 videos where they’d just happened to stand a bit too close to the camera. It still worked, but the more we looked at it, the more they’d say “I wish I’d stood a bit further back!” If only they’d filmed a short snippet, got it onto a VR headset or two and checked how things were looking at the time! Whenever this is possible, I’d strongly recommend it. Even better — check on a few VR headsets as the differences in lenses on a Google Cardboard headset compared to a Vive or Gear VR (or even just amongst different Google Cardboard headsets, to be honest) can sometimes make things look a bit closer too.

Change it in real time

One option is possibly the most effective to accommodate for a range of cultures — and I’d love to know if anyone has built this into their VR apps just yet — change it in real time.

“I think the ideal solution we should be working towards is to have avatars in our VR environments that notice these cues and adjust their position to suit the current player. How close are they choosing to stand to that friendly sidekick character in the conversation? Train the character to take note and keep that distance as they each move through the environment.” — Patrick Catanzariti

While it is a bit more work and you can’t just set up key spots in the scene for characters to move to, this takes out all that guesswork and makes it more natural. More dynamic. It could even be a great way of measuring whether the player is starting to feel more comfortable with the character. Are they moving closer by choice to them over time? This could be a neat way of helping an AI character to choose the tone it uses in conversation or even change the whole conversation. That’d be pretty darn cool.

For me, it’s fascinating to think about how much such a simple factor could negatively affect someone’s impression of a VR application — and how doing it well could make a VR application so much more comfortable and engaging for people to experience. As mixed reality headsets develop in the coming years, I can see the same lessons we find from VR being applicable here too.

Have you had any experience with designing around personal space in VR? Across cultures? Any stories to tell? Tips to share? I’d love to hear them! Feel free to share in the comments below, or tweet/DM me at @thatpatrickguy on Twitter (DMs are open to all!).