Wednesday, May 23rd, 2018 by Patrick Catanzariti

Puya Abolfathi and his Sydney-based team at Visospace are putting together smooth omnidirectional locomotion using a hoverboard-like device called the Alto100. It has reached 100% funding on Indiegogo this week and I wanted to get some more detail on their tech! 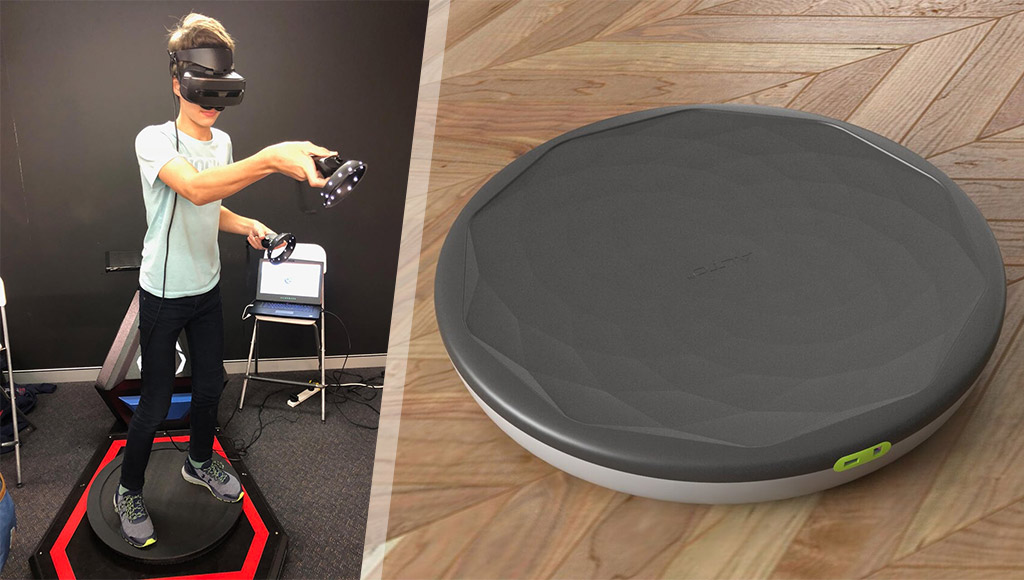 “Alto100 is the first Developer Kit planned of the Alto platform, a new genre of natural intuitive locomotion for Virtual Reality. The Alto100 dev kit is planned to be rolled out to just 100 developers around the world to help field test, refine and produce content for the platform.” — Puya Abolfathi

What I find quite fascinating is that the Alto platform and experience is, as Puya puts it, “an illusion much like VR itself”.

The Alto turns shifts of weight on the hoverboard-like platform into accelerated movements that match the direction they are shifting towards.

They also feel the shift of the board under their feet with “vibrotactile haptic feedback that reinforces the illusion of movement under the board” — they’ll feel little bumps in the terrain and the “jet stream” of accelerating over the virtual space. 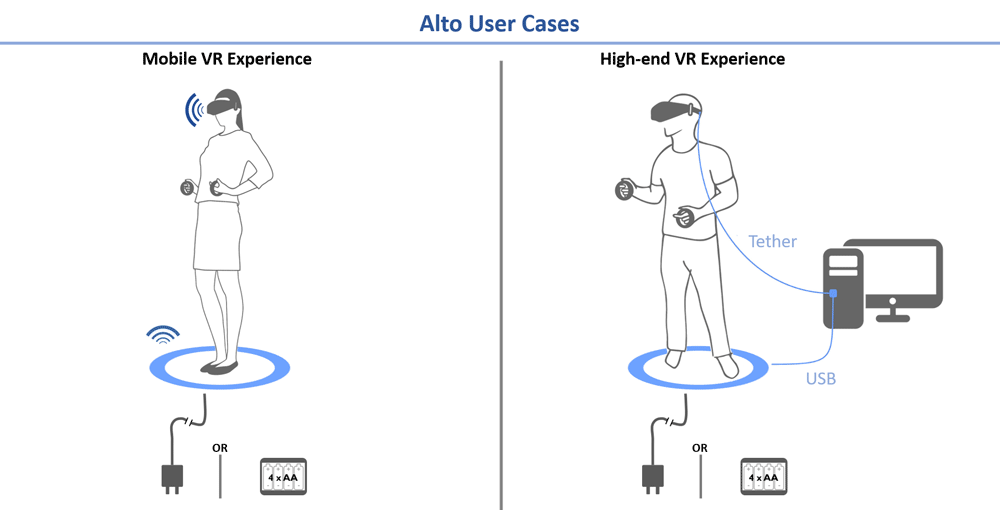 Examples of the Alto platform in use

Puya is quick to point out that “acceleration” is the important point around how this works — he says “it needs to be based on real physics complete with momentum/inertia, not instantaneous movement”.

From an engineering perspective, the Alto contains electronics underneath the board that sense shifts in weight and process that into the Alto-language their platform can understand. It then gets streamed across to a PC or a smart device hosting the VR application, while also being able to receive messages back from the VR app too (so that it can match what’s happening in the app).

The Alto is being designed in a way where it can be fully wireless and future proofed to work with all VR experiences including phone-based VR and standalone VR. It’s also possible to use the technology with AR experiences in future, or even as an accessory to a smartphone/tablet app. Anything that can connect via Bluetooth could potentially use the Alto as an input!

Accessing the Alto platform as a developer

It seems the team at Visospace decided — why not both? Their SDK will support both Unity and Unreal (C# and C++) across all devices. They also encourage developers to use the Alto in multi-user experiences that allow people with the Alto interact with people without it too.

There is an SDK that will allow developers to create their own experiences using the Alto platform for Unity, Unreal and potentially other programming environments too. The plugin (a dll) which Visospace provides means you should be able to import the Alto as an object into any experience.

The object provides real-time information about its real-world properties (magnitude and direction of the tilt of the board) as well as the state of whether the user is standing on it or not.

The team are looking to build up the communication between their team and developers using their platform in a range of ways, including opening up access to GitHub repositories and adding developers to their Alto Discord channel. The goal is to allow for open discussions on what can be refined and improved, as well as to give feedback to developers on their creations.

It’s always fascinating to trace back an idea to its origins. Puya says that early common experience with nausea and movement in VR led them to their first prototype. Puya recounts,

“We looked at research that shows how base level causes of motion sickness can be inhibited by tricking the brain into really believing the illusion of movement. We found this could be done by standing on a flexible tilting platform that feels like a floating ‘hoverboard’ so long as the experience responds to exactly what the brain expects.”

With that early prototype came an early game. As Puya recalls, “it took a few experiments with movement paradigm but soon we discovered that the simpler you make the physics, the better.”

As always, the best way to check the potential of any new emerging tech creation you put together is to get others to jump on and use it! Their initial test subjects? Their kids:

“The first time we showed it to some of our kids without giving them any instruction and saw them fly around a virtual world with ease we knew we were on to something. If you want to create an intuitive platform, make sure its kid proof!” — Puya Abolfathi 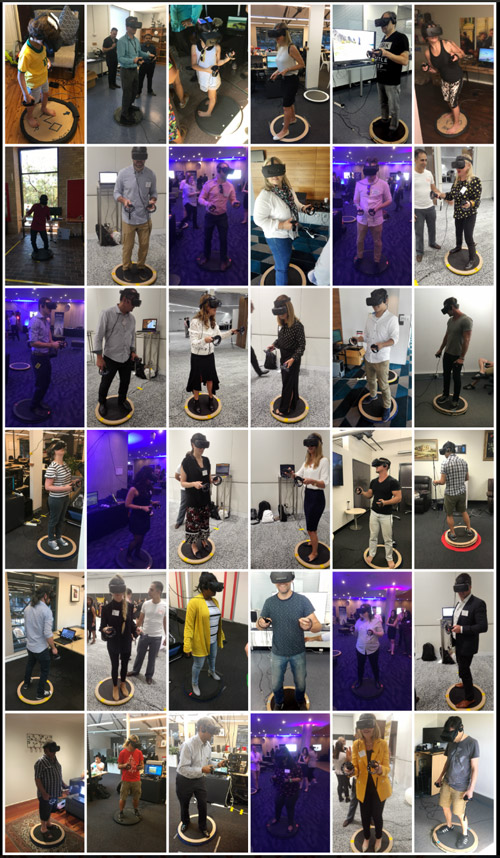 A whole bunch of people giving the Alto platform a go!

Is VR just a passing fad?

Often one of the main questions that comes up when I talk about VR startups to regular folk (and some in the tech community too!) is whether it’s worth doing anything around VR by this point. My thoughts are (of course) that VR isn’t going to disappear any time soon, but I wanted to see what Puya thought of it all too. His response:

“With so many contending acronyms, VR/AR/MR/XR, VR as a word might be a passing fad. But a flavour of the concept of ‘immersive computing’ it is very much the future and the ultimate way of interacting with and processing information, knowledge, the physical world and each other.

VR as a method involves us being present and embodied in virtual worlds represented in audio/visual/haptic (maybe soon smell and taste) data. With AR, we bring the virtual worlds and objects into our base reality to give us superpowers and to enhance and augment our real world. The future will see both these mediums merge into singular wearable interfaces. But beyond this certainty, we believe that the full potential of virtual and augmented reality will be unlocked when social networks and the world wide web are fully enabled, intuitive and low friction. That’s when we will see mass adoption of the mediums. People cite price of VR/AR technology as being an obstacle but that has never been an issue for smart phones being adopted across the entire world. Smart phones are ubiquitous because they bring the internet and social networks to our pockets and fingertips. Mass adoption is much more about the user experience, the interaction modalities and friction to use than the price.”

So what is the most fun thing you can do with the Alto so far? Puya has a sweet spot for “Alto Island” which they use in their user testing as it showcases what’s possible in terms of both movement and gameplay with the Alto:

“Alto Island is still one of the most fun games we have made. You start in the middle of this mysterious island and, as you go around exploring, you find yourself under attack by these angry robotic turrets! You fire back at them with your massive missile launcher and think you are doing great before you realise that — while you were busy on the ground a humongous UFO has just come down from above unleashing hell upon you! I won’t tell you the secret of how to bring down the boss! You will have to figure this out by yourself, but the ultimate goal is to beat our best score of 5400!”

The future of the Alto

Puya and the team have a grand plan for their tech! They’re actually planning to release two crowdfunding campaigns, Alto100 (for 100 developers) and a second campaign coming in a few months:

“Our strategy to turn Alto into a product everyone can enjoy is to release it in two crowdfunding campaigns. The first campaign is Alto100, the dev kit for 100 developers that we have mentioned. This started in April and will close in 5 days. Our challenge has always been marketing and getting information out there to the world. We’ve made our bare minimum target of $10,000 and around 12 Altos to start a small community but ultimately would like to see all 100 being used. At $600USD this version of the Alto is rather expensive for many developers we are talking to but at this stage of the prototype where much of the manufacturing is low quantity and hand built, the cost of production is high.

The second campaign will be launched in a few months after we fully field test the Alto100 boards and collate several experiences/applications that can ship with the consumer version. This consumer version of the Alto should be much more economical. We expect it to retail between $200-$300. And as we get uptake and economy of scale we hope it will continue to come down in price as we want it to be accessible to all.”

It’s a pretty exciting year for their team!

Thanks to Puya Abolfathi for taking the time to share his story. Check out their Alto100 Indiegogo campaign and spread the word about their fantastic efforts!

Hi all this is Puya from Visospace. Thanks Patrick and the Dev Diner team not only for the wonderful write up about our Alto but for what you do for the industry. As a proud Australian VR startup we are extra proud to have Dev Diner being produced right next door to us in beautiful Sydney! Keep doing what you do!