Insertables — why wear tech when you can have it inside you?

Wednesday, May 24th, 2017 by Patrick Catanzariti

There’s a whole area of emerging tech which I’ve honestly never tried to get into before. It takes things to the next level in a way that nothing else in tech really compares to. I’m talking about “insertables” — putting tech inside you. Kayla Heffernan is doing a PhD on this very topic! I just had to throw a bunch of questions her way… there’s so much I want to know!

The tiny things people insert into their bodies, compared to Aussie coins (alongside some of the tools of the trade!)

“It all started one cold winter night in 2012. I had my Myki (Melbourne transit card) in my glove and touched off using it. It was quite a natural user interaction and I thought that it would be a pretty cool way to interact.” — Kayla Heffernan

Kayla is doing a PhD at The University of Melbourne in the Microsoft Research Centre for Social and Natural User Interfaces. Her topic? “Insertable Devices: In, through and underneath the skin”.

Her research looks at how to design for insertable devices by “first understanding the users (what people are putting in their bodies and why), the public’s negative reactions to these devices, how they are currently being developed and what gaps there are, and what is different about designing for insertable devices”. So, what are insertables exactly?

“Insertables are devices that go in, through or underneath the skin. We use the term insertables, rather than implantables as they are predominantly used for non-medical purposes and are not really “implanted” into the body.” — Kayla Heffernan

Kayla provided some examples of insertables — “microchips, for example, are inserted using a syringe and they can be taken out. Piercings with digital components or sensors on them would, therefore, fall under the definition of insertables, as would digital contact lenses, contraceptives and menstrual aids — basically any device that goes into or through the body in some way.”

What do people insert into themselves? 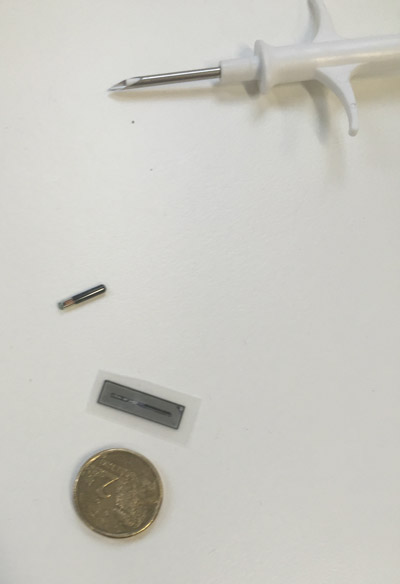 A microchip with an Australian $2 coin for scale

My instant thought was, honestly, quite skeptical. What would someone actually feel the need to insert into themselves in such a manner? It sounded insane… initially! Kayla pointed out some of the common things people are inserting into themselves today,

“Typical insertables are RFID and NFC microchips, about the size of a grain of rice, inserted with a large gauge syringe like that used in body piercings. They are used for access and authentication (both physical to offices, homes, cars, motorbikes and logical to phones, computers) and storing and transmitting small amounts of data (contact details, URLs to websites, Twitter, LinkedIn).”

Access and authentication make sense. Never lose your keys again! They are within you! Things like providing contact details or URLs to websites doesn’t quite sound worth it to me, but I’m not really the sort who would get a piercing or anything like that. Some uses of insertables aren’t exactly life-changing but they do sound pretty fun,

“Some participants store a link to Rick Astley’s “Never Gonna Give You Up” which they use to prove they have a chip in their hand (by scanning it on someone’s phone).” — Kayla Heffernan

Who is it that has embarked on the insertables journey so far? Kayla says that many early adopters out there see it as “the next big thing”, some have a single use case they want to solve (keyless entry into their house!) and overall don’t take it much further. The ones who are really into this and push things further are an entirely different community, as Kayla explains,

“Others are interested in the Transhumanism movement, or becoming cyborgs, and aren’t satisfied with a truly biological human body and want to extend their functions. This is all that is available so far to do so.”

Some uses I’d be more comfortable with than others. Having my key inserted into my hand could genuinely be pretty useful. However… the trend involving magnets… I’m not so sure about but it sounds quite fascinating!

“Another common insertable is magnets, which are typically placed in finger-tips near nerve endings as they vibrate when they come in to contact with electromagnetic fields. This enables people to “feel” an extra sense.” — Kayla Heffernan 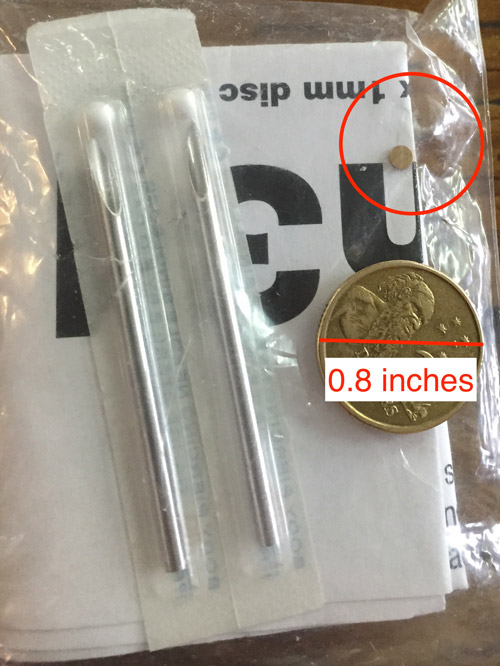 The size of a magnet that can be implanted into your finger!

The next thought on my mind instantly went to the health risks… is this a safe concept? Surely inserting tech into the body isn’t a natural thing… what does the body do to react? Kayla explains,

“As with anything going into the body, there is always a risk of infection. With the microchips, however, as they are fully inclosed in the body without an open wound (as say, piercings), they heal very quickly, much quicker than piercings. The side effects are swelling and pain at the insertion site for a few days. We have had no participants report rejection of microchips. What can happen, however, is the chips not being able to be read or getting ‘bricked’.”

Magnets seem to have a slightly higher risk:

“With magnets, the risks are higher as they are more invasive. The risks are still quite low, however, we have had participants have magnets reject and come out of the incision point. All of these have been in the case of self-insertion. There was a line of magnets which had the coating fail, which leads to bodily rejection. Again, some participants have had the magnets stop working.”

The lesson here? Don’t try this at home. Get a professional to put your tech into you, if you want to give it a go!

“We wouldn’t recommend putting them in yourself! Go to a trained professional who will sterilise the devices properly and provide the safest experience — treating the area with antiseptic prior and using sterile tools. The most common place to get these done are tattoo and/or body modification studios. Some participants have gone to GPs they trust to perform the insertion.” — Kayla Heffernan

Coming to the mainstream?

When will insertables be a mainstream thing? Kayla thinks a killer app will be the tipping point,

“A killer app is needed to get the public over the “ick” factor, for the perceived cons to be outweighed by the benefits. I think that killer app could be payments. If you could pay with the wave of a hand more people would come on board.” — Kayla Heffernan

A huge thank you to Kayla for taking the time out from her research to give some insight into insertables for the rest of us! If you’d like to get in touch, she’s on Twitter at @kaylajheffernan and everything to do with her research is over on her website. Check it out! If you do have an insertable device already within you — get in touch with Kayla! She’d love to hear from you!