This week, we have a pair of smart sneakers that orders pizza, a robot that solves a Rubik’s cube in 380ms and a pair of audio-focused AR smartglasses coming from Bose. I think it might also be the first time AR news has outnumbered VR news in the newsletter! 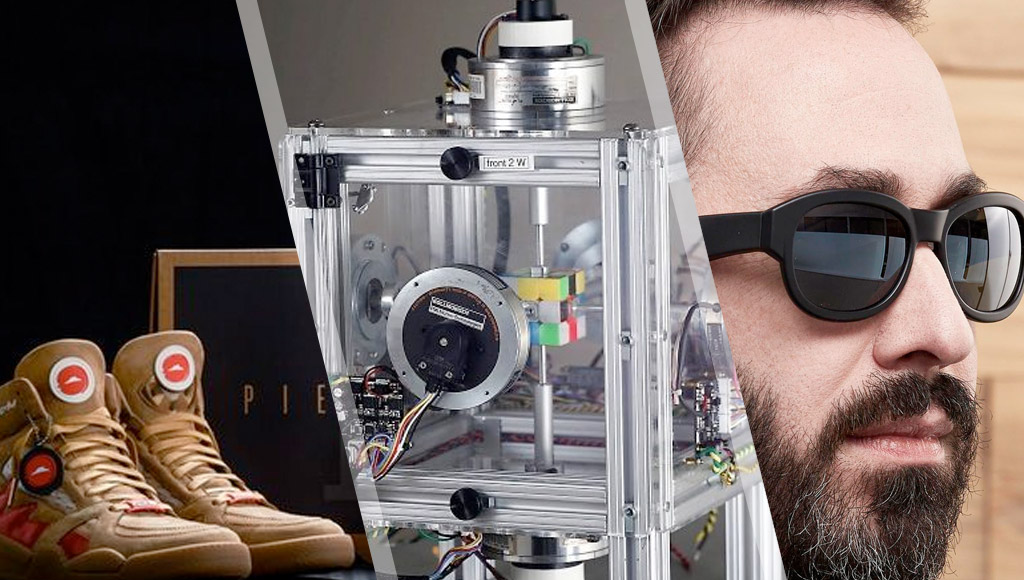 A whole series of in depth, step-by-step articles and accompanying content that’ll help you build a virtual assistant/chatbot no matter your skill level! Content is almost all in there for early access release! Pre-register and get a discount code when it’s out as my way of saying thanks for the support!

This VR game is designed to help stroke victims.

Barry Dineen from BVN looks at their experience using VR for architectural visualisation.

Barrett Fox and Martin Schubert from Leap Motion give some great insight into VR interaction design.

Motorola’s next Moto Mod may be a VR headset

Still a rumour but looking likely — a Motorola VR headset.

Yep, no more starving while in the virtual world.

The speaker and headphone manufacturer is bringing AR to your ears, rather than your eyes, with AR glasses. There’ll be a Bose AR SDK later this year too. Wareable had a good look at them too.

The DynaEdge AR smartglasses are focused on the workplace and use Windows!

There’s another Pokemon Go-like game to go with the Harry Potter, Garfield and Ghostbusters.

Not a whole lot of this article is about AR but it’s important as it shows Apple really are intending to make AR a huge deal soon enough.

Lingmo decided that earpieces weren’t for everyone and has a second approach.

Alivecor wearables May detect unsafe potassium levels in the future

This could really help people as high blood potassium is linked to diabetes, dehydration and kidney disease.

Press the tongue on these shoes for the connected magic to happen.

New features coming to the Google Pixel Buds in the next version of the Google app!

Huami’s Amazfit core is breaking out of China, with Fitbit in its sights

The company is from Xiaomi and are bringing their wearables into the US.

We now know the name of the next Fitbit!

Googlers are furious about their AI being used with military drones

Googlers discovered, much to their dismay, the AI they built is being used by the US Department of Defense to analyse video footage captured by military drones.

A good use of AI that could make a positive difference!

The headline is a bit misleading, as the report says they’ll “lay the groundwork to become the world’s unchallenged AI hegemon” in 2018. It raises good points though — China has a huge population and “doesn’t have the privacy and security restrictions that might hinder progress in other nations”.

The Inquirer say it’s coming to a Visual Studio near you!

As a result, Cortana will soon be able to read Outlook emails on iOS and Android.

Flippy the burger-flipping robot is already on unpaid leave

Flippy worked for one day, but put too much pressure on his human counterparts who couldn’t keep up with the robot’s speed and the influx of customers.

Evernote will use AI to automate your workflow

It will scan text and suggest items you’ll want to action from it.

There could be unintended consequences, so it’s good to look at those and discuss them.

Insect-like robot learns to adjust its walk on the fly

A team at the Tokyo Institute of Technology is “teaching a six-legged android to improvise and adapt—just like bugs”.

This robot solves a standard Rubik’s cube in 380 milliseconds.

This is a tale which highlights why it’s important to design and test your chatbot/virtual assistants properly — and ensure people can get in touch with a real person if they need to.

We need to improve the accuracy of AI accuracy discussions

Danny Crichton from TechCrunch points out the adjustments the tech press need to do to improve their AI coverage.

Loomo can give you a lift or follow you around.

Your smart home is spying on you. Here’s how to spy back.

Gizmodo have some tips for keeping an eye on your smart home devices.

Ignore all ‘fake news’: this is why Alexa is really laughing at you

Amazon Echo devices have been randomly laughing at people, creeping them out. 100% not what you want to hear late at night. Amazon have worked out what was going on though and are fixing it.

Connected tech makers “have been told to implement security by design”.

You can now turn on a setting allowing a follow up question after your initial one.

Report: Alexa will soon be laughing at you in the workplace, too

Okay, not really, that’s been fixed. But, Amazon is planning to integrate Alexa into enterprise software.

47.3 million US adults have access to a smart speaker, report says

Nearly 1/5 of US adults have access to a smart speaker, which is pretty good adoption for an IoT device!

Philips Hue outdoor lights will be available in July, with three products on offer

They are releasing a range of outdoor Hue lights!

3 co-located events. 19 conference tracks. 9,000 attendees. 300+ speakers. 300+ exhibitors. It’s all happening in London! Use the discount code DEVDINER20 to get a good deal on your tickets! They have a a free Data Analytics for AI and IoT track too!