This week, we’ve got a way of making AR apps that work on both ARKit and ARCore in the latest version of Unreal Engine, an unexpected entrant into the VR space — Metamucil, Arduino-powered light up stairs, and one Japanese engineer who made his own 28-foot high Gundam robot. Just amazing. 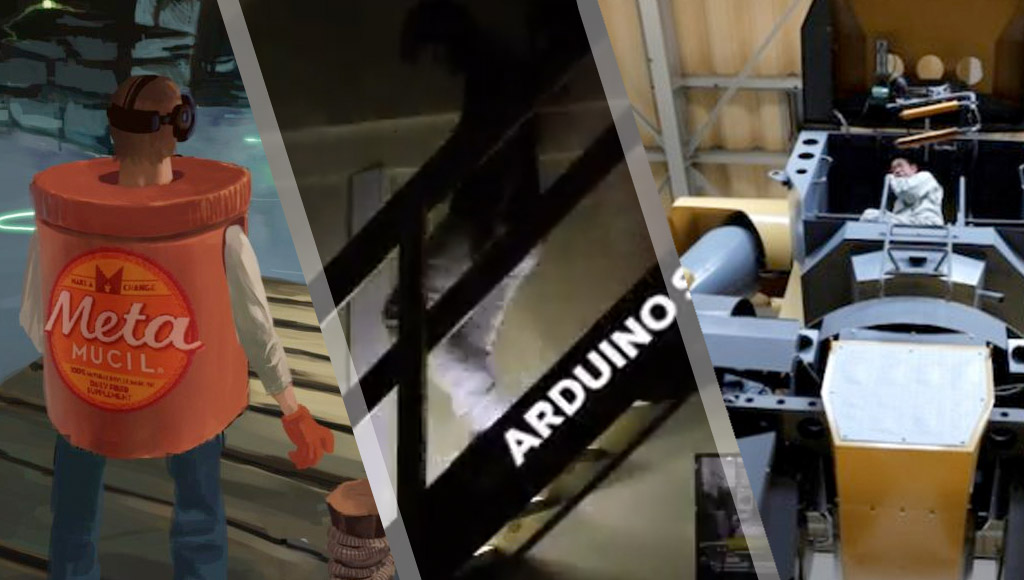 A whole series of in depth, step-by-step articles and accompanying content that’ll help you build a virtual assistant/chatbot no matter your skill level should be open for early release this month!!! Pre-register and get a discount code when it’s out as my way of saying thanks for the support!

Improved AR and VR features available to all with Unreal Engine 4.19 release

There are a bunch of handy VR/AR updates available to the public now, including one that allows devs to create an AR app that will work for both ARKit and ARCore.

Take a VR trip through the human digestive system in gutland

An unexpected entrant into the VR space — “Metamucil invite guests to experience an interactive journey of education and gameplay”.

Preservation organization CyArk uses photos and laser scans to make virtual tours of places that may not last in reality.

The Elder Scrolls V: Skyrim VR recently came out on PC and this guy used it to lose 10 pounds!

They’ve been busy! Most excitingly, they finished their Unity WebVR exporter v1.2.0 release.

The design of Firefox reality

A look at the start of Firefox’s development of its upcoming VR/AR browser — Reality.

VR has proven it can ease the pains of childbirth – next, the opioid crisis

VR is finding uses in hospitals to help with pain.

The first Google VR180 camera and a standalone Daydream headset with 6DOF are launching on May 6 (available for pre-order).

Its feed will be stabilized straight out of the camera which is pretty handy!

Project Ghost Studios have revealed some of their “SR SDK” that uses Vive Pro’s dual cameras.

They’ve decided to instead take pre-orders, no Kickstarter required!

Kotaku covers how things have gone with ARKit so far, might be a good piece if you’re looking for inspiration to get building AR!

This infographic looks at the potential uses of AR by 2025.

The Magic Leap One experience (Part 2, ML1’s terrible view of the real world)

Karl Guttag built a prototype that he thinks matches the Magic Leap One view and shows what it looks like.

The CEO of Magic Leap isn’t a big fan of Karl Guttag making educated guesses about his products.

Facebook are rolling out 3D drawing on their camera app.

This app brings music to life in augmented reality

Wavy is looking to help musicians enhance their music videos with AR.

Accessible Realities: Making video games and XR accessible for people who are blind or have low vision

Some innovative ideas here to help those less fortunate enjoy tech too (thanks to Geoff for the link!).

Charged up: what I’m loving (and not loving) about Fitbit’s smartwatches

Michael Sawh at Wareable gives his thoughts on the latest Fitbit smartwatches.

Rae Steinbach from Snaps has some tips to share on making a chatbot that stands out from the crowd.

TensorFlow in your browser

Hackaday has a guide to getting started with using TensorFlow and JavaScript to build AI that runs in the browser!

Google AI experiment has you talking to books

Google has launched a series of “Semantic Experiences” websites showcasing some AI experiences.

Google are teaching AI to pick out audio in a loud scene, just like humans can focus on a voice in a loud environment.

Enjoy pre-trained machine learning models to recognize all sorts of things with a camera you’ve made from cardboard!

The UK is worried about AI and has come up with a code for AI to abide by.

Love and compassion will save us when AI takes our jobs

“Will robots replace designers? No. It’s more like an exoskeleton for designers.” (Thanks to Jason for the link!)

“Significant sales have been cut off” when Microsoft felt companies wanted to use their platform for unethical reasons.

“Their results, they say, show that animals could provide a new source of training data for AI systems — including those used to control robots.”

How more women in AI could change the world

A discussion around whether women designing AI would change the results.

Alice in Putin’s Wonderland: how Russia’s AI assistant compares to Siri and Alexa

This Russian voice assistant is “exploding in growth and is not encumbered by any privacy or regulatory concerns”.

Waymo has become the second company to apply for the newly-available permit to deploy autonomous vehicles without safety drivers on some California roads.

How artificial intelligence will take over the supermarket produce aisles

Machine learning “will help create tastier, cheaper food for all”.

“Researchers have developed a robotic gripper that combines the adhesive properties of gecko toes and the adaptability of air-powered soft robots to grasp a much wider variety of objects than the state of the art”.

Apple’s latest Machine Learning journal speaks about their attempts to use AI to get rid of the need for initial training of Siri.

Face recognition technology that works in the dark

Researchers have built AI that produces a visible face image from a thermal image of a person’s face in low light.

Japanese engineer Masaaki Nagumo made his own massive Gundam robot he can ride in.

“Some locations are selling fewer than 10 HomePods a day”.

The US chipmaker has its eye on the IoT market now.

Developer, Dante Roumega, connected up their stairs with Arduino so that they light up each step for him! Seriously cool.

A fascinating look at the costs and all involved after one homeowner had Tesla’s roof tiles installed.

10 things every Alexa skill should do

Microsoft doubles down on IoT security with Azure Sphere

Microsoft announced a new program to help companies build secure IoT devices and… wait for it… are launching a custom distribution of Linux to do it.

A great DIY project — be able to close your door just by asking Alexa to do it for you using a Particle Photon and 3D printed door closer.

An elaborate hack shows how much damage IoT bugs can do

“Rube-Goldbergesque IoT hacks are surprisingly simple to pull off—and can do a ton of damage”.

3 co-located events. 19 conference tracks. 9,000 attendees. 300+ speakers. 300+ exhibitors. It’s all happening in London! Use the discount code DEVDINER20 to get a good deal on your tickets! They have a a free Data Analytics for AI and IoT track too!