This week, we’ve got flexible PCBs available to order, a mega-sized Echo Dot speaker shaped like an Echo Dot to give your Echo massive sound, researchers revealed a way to turn 2D images into 3D augmented ones, and one developer used Roomba maps to generate maps for the classic shooter Doom! 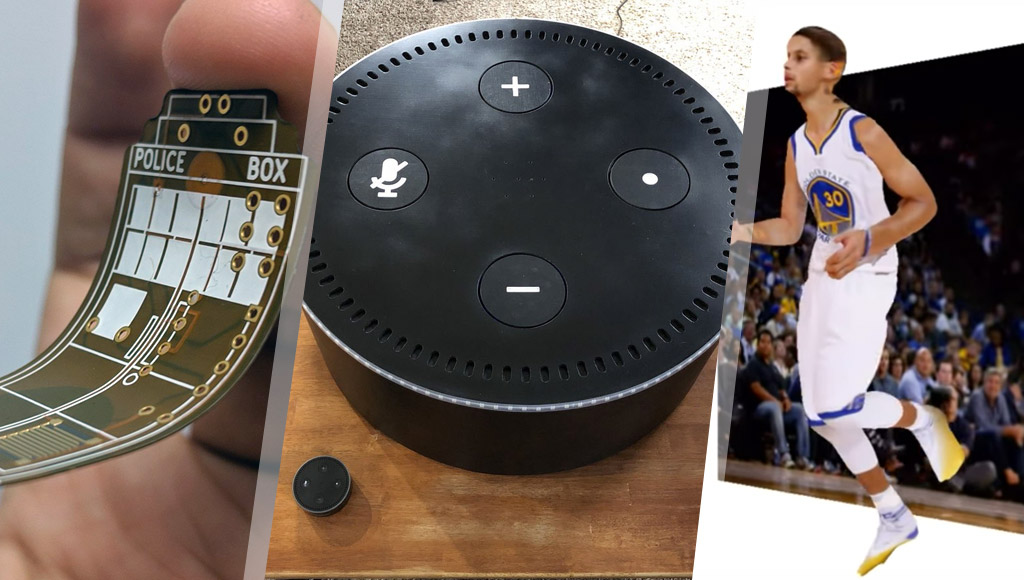 Flexible PCBs, a MegaDot speaker for your Echo Dot and a way to turn 2D images into 3D

Nominate your emerging tech inspirations of 2018!

Happy New Year everyone! Dev Diner has a yearly tradition where we ask for nominations for those in emerging tech who’ve inspired you in the year gone by. Help give a bit of recognition to those who really deserve it for their efforts in 2018. We like to highlight those in the industry based on the community’s nominations, rather than any judgement calls of our own. Show your appreciation by heading here and nominating a person or two!

Wareable have crowned Oculus Go as their VR/AR innovation for 2018 — beating Magic Leap. This article talks about why.

Valve has released a list of the 100 top selling VR games on Steam of the past year and… a lot of them are on special right now.

The Verge’s Adi Robertson gives VR/AR a grade of C for this year.

“If 2016 was the birth of modern VR/AR technology, than 2018 was its elementary school graduation. While this past year may have seemed like a quiet one when compared to the more exciting releases featured in 2017 and 2016, these past 12 months have been crucial in the development of the immersive entertainment sector”.

These seven tactics can help consumers of VR avoid getting motion sick while using VR.

VR experience lets you step inside a dead star

A VR simulation of the youngest known supernova remnant in the Milky Way Galaxy, referred to as Cassiopeia A.

Something for the weekend: PlayStation VR January savings

PlayStation Store’s sale is on until 10th January, so if you’re looking to do some PSVR over the break and want new stuff…

A very good use of VR actually which could save lives and help employees be more prepared.

“There are over 300 peer-reviewed studies that show VR is an effective tool for treating mental health disorders such as anxiety, depression, trauma, and addiction.”

China shows its masterplan to lead virtual reality in 2025

The Chinese government wants to lead the VR world by 2025.

Next Reality has a look at what the industry has accomplished from a business perspective.

Next Reality also look at the biggest AR investments from the year.

This technique is worth checking out — generating a 3D augmented reality model from a 2D image! Here’s a YouTube video showing it in action.

“It increasingly seems like 2019 could be the year that HoloLens 2 is revealed”!

“Dr. Barmak Heshmat, delivered an 11-minute presentation designed to offer some clarity regarding the present and future of AR, from his perspective”.

Fitbit and Wareable have teamed up to explain sleep metrics that their devices track — sleep metrics are one of the main reasons I got my Fitbit!

How to text on a Fitbit Versa

It also works for the Fitbit Ionic as they run the same operating system.

“Costing $15 per square inch, which includes three copies of your board, the flexible PCB is about three times as expensive as traditional FR4 boards.”

The machine learning process worked out how to subtly encode the features of one image into the noise patterns of the other to get solid results.

Echo Dot failing to drop the bass? Build your own gigantic replacement!

Hackster featured this amazing tutorial from JoeGadget on building a” MegaDot” that is eight times the size of an Echo Dot!

This AI teaches robots how to walk

“Researchers at Google Brain and the University of California, Berkeley have developed an AI system that taught a quadrupedal robot how to walk from scratch”.

Researchers claim to have developed an AI system that can identify people with dyslexia using EEGs.

Engadget had a look at 2018 for artificial intelligence.

VentureBeat has a look back at some of AI’s biggest wins in games like DOTA 2, Montezuma’s Revenge and StarCraft II.

The year in robots, from Boston Dynamics to (RIP) Baxter

Wired had a look back on the biggest moments in robotics in 2018.

“Amazon shipped more than one billion products for free via Prime”.

This Roomba can turn cleaning maps into Doom levels

Alexa crapped out on Christmas

Keep an eye out (especially for people who aren’t as tech savvy) as there’s a fake “Setup for Alexa” app on the app store.

Here’s a guide on how to make a lamp out of vacuum tubes, transistors and LEDs.