This week, we have a new virtual reality mask to smell and sense VR, we remember Notre Dame with a range of VR and AR ways you can experience it, Boston Dynamics robots pull a truck and lots more. Quite a few good articles on AR this week in particular! 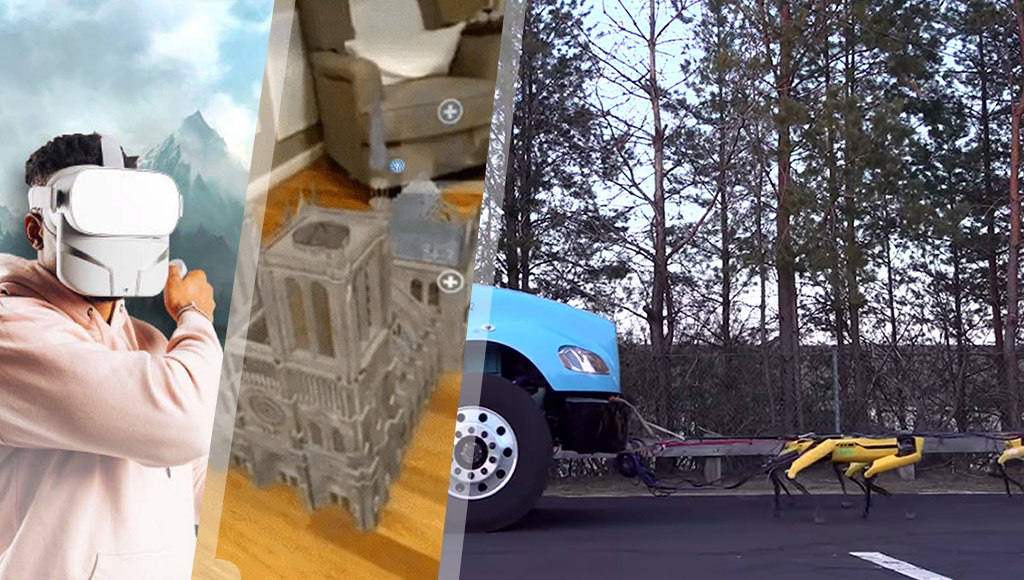 Mr Skarred Ghost on what to do if your Oculus Rift shows the error of “An Oculus update may not have installed correctly” — you’ll want to fix it as soon as possible!

“Where new headsets like the Oculus Quest and HTC Vive Focus Pro really shine is their ability to help us interact more freely with other people”.

A look at improving how we control mixed reality interfaces by using multiple inputs together (e.g. speech and gesture).

N1NE: The Splintered Mind is a VR take on ‘Blade Runner’

How to find the right headset for your enterprise VR project

A nice look at which headsets work in which situation.

Why AR/VR developers should prioritise accessibility in UI/UX design

Accessible design, like in many other areas of UX, can bring a whole lot of benefits to what you’re building.

The current state of the VR/AR patent landscape

A look at the patent process and what’s involved around VR/AR patents right now.

Exclusive: what to expect from Sony’s next-gen PlayStation

Wired had an exclusive with Sony, the main update VR-wise is that the current PSVR works with it… but maybe, just maybe there’ll be an updated VR headset, they just wouldn’t say that.

Oculus referral codes are now available outside of the US!

Oculus referral codes are now available worldwide and the new limit is 5 per month per user!

After the awful fire earlier this week, here are three places you can see Notre Dame in VR.

Preserving historical landmarks in VR should be a priority

This piece from VRScout talks about how useful having VR replicas are in situations like Notre Dame.

It has a preview of AR Remote where devs can preview their AR app directly on a target device, Magic Leap is now supported without needing a special technical preview build and more.

Designing an input device for the real world: a process of elimination.

A look at the alternatives for input devices around AR.

Going beyond existing VR appearances listed above, USA Today put together an AR experience around the Notre Dame.

Snap partnered with the United Nations Environment Programme to use AR to show how much ocean levels will rise over the next 80 years.

A nice and simple use of AR is now over at Shutterstock.

A look at where AR headsets are starting to emerge around Apple, Facebook and more.

The future of the AR cloud — a thousand walled gardens bloom

Facebook reportedly working on a voice assistant compatible with Oculus

It’ll be an AI assistant similar to Amazon’s Alexa.

Don’t worry everyone, we have a “new and improved snake-inspired soft robot that is faster and more precise than its predecessor”.

Our snake robot could then one day learn to “grab and manipulate tricky objects” too!

All while their friendly robo dog cousins pull trucks around. What a robot filled world it shall be.

At least that pesky OpenAI bot will stop beating us at DOTA 2.

The British government has made over 12,000 pieces of Gov.uk information available via voice!

AI could predict death. but what if the algorithm is biased?

In a Wired opinion piece, researchers are studying how AI could predict risks of premature death — but what about when AI’s unconscious bias comes into play?

“Ever wanted to listen to an infinite stream of death metal? Thanks to AI, you can”.

Giving a chatbot a human name or humanlike features can upset people when it doesn’t manage to maintain a conversational back-and-forth.

Facebook’s AI can convert one singer’s voice into another

“In a paper, scientists at Facebook AI Research and Tel Aviv University describe a system that converts audio of one singer to the voice of another”.

Designed for kids — it has a modular and programmable design with intelligent servos, and built-in motion recording function so you can teach it new movements.

Internet of Things, Wearables and Makers

Particle Workbench is built on Microsoft Visual Studio Code and gives it Particle-specific integrations to help make you more productive when IoT coding away!

“The iOS- and Android-friendly smartwatch, which runs on a custom OS, joins a very small group of watches that offer official support for Alexa on the wrist”.

A really nice DIY solution! “Starburst candies are loaded into a chute, and when the button is pressed a motorized arm pushes out a single candy from the bottom of the stack”.

Hack my house: UL certification and turning the lights on with an ESP8266

A nice and thorough way to put together a quality Wi-Fi light switch.

Write in lower level code than Arduino on this neat little board – for those times when even microcontroller code is too much.

7 common IoT mistakes and how to avoid them

Temboo has a list of 7 common IoT mistakes to watch out for when planning and implementing a new IoT solution.

“Paco’s machine is an open source project, and involves the combination of a robotic arm and computer vision, allowing it to identify and pick up various small, lightweight objects”.

Microsoft have bought this company who own a real-time operating system (RTOS) aimed at controlling IoT devices.