Wednesday, May 15th, 2019 by Patrick Catanzariti

This week, there’s so much Oculus Quest hype (yay!), a new AR platform from Lenovo with their AR headset competing with the HoloLens, really sad to see Nest’s APIs are shutting down but maybe AR musical chairs with the Avengers will help you feel better. 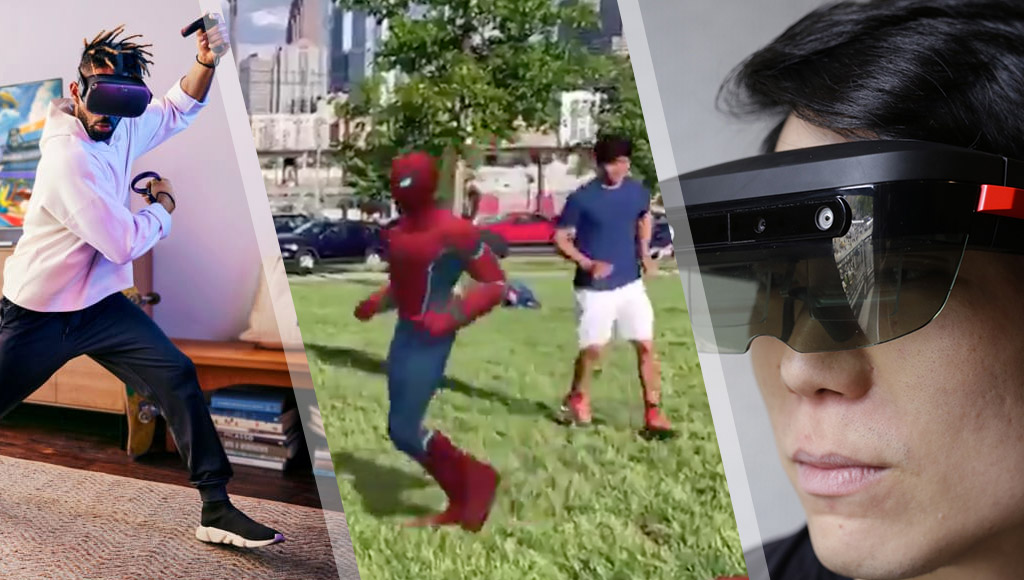 No tethers, no limits – SUPERHOT VR on Oculus Quest

The SUPERHOT VR team rebuilt the game for the Oculus Quest and say it’s the best platform for the game yet thanks to the lack of cables.

The Oculus Quest VR headset will make you sweat, and that’s great

Fast Company have a pretty promising review of the Oculus Quest and how well it gets you actively moving around.

… and it’s not getting a whole lot of competition in the standalone VR space either.

“Streaming PC VR content to an iPhone is finally possible thanks to RiftCat as it launched the long-promised iOS version of its VRidge software this week”.

They use air resistance and weight shifting to generate haptic feedback, giving a sense of object size and movement.

Both headsets use the DisplayPort connector instead of HDMI.

VentureBeat say “the low end of the VR market may be collapsing, but it’s going to force higher-performance VR platforms to change their pricing and technologies”.

It’s similar to HoloLens 2, but uses a compute box instead of having it all in the headset. It’s the start of a new AR platform Lenovo are trying to build up.

Swapping genders is taking Snapchat by storm this week.

Inside Sumerian—Amazon’s big bet on augmented and virtual reality

PCMag had an inside look at Amazon’s VR/AR app building platform.

How Facebook plans to boost augmented reality with Spark AR

VentureBeat had an interview with Matt Roberts, product manager for Spark AR.

This is such a brilliant idea for an augmented reality demo.

How to show a 3D model in AR inside your website

How to add a neat little “View in your space” style feature for 3D models on your website.

Measure your feet in augmented reality with “Nike Fit”.

Early preview of AR walking navigation in Google Maps is now open to all Pixel devices. If you have a Pixel device, definitely try it out as it’s quite cool!

There’s so much that can go wrong with this technology, we’ve really got to hope for those involved to be moral.

Finally when our Italian builders say “oh but can the robots cook me pasta?” I can say… No! But they might be able to help.

You can even make your own — they’ve shared it on GitHub.

Amazon Alexa transcripts live on, even after you delete voice records

You can delete voice recordings but text records aren’t able to be completely scrubbed from Amazon’s records.

Robots are coming to a hospital near you

“In one San Francisco hospital and other places, delivery robots–about the size of a mini-fridge–zip through the hallways delivering pills, bringing lunch to patients, and ferrying specimens and medical equipment to different labs”

This Luxo Jr.-inspired robot reacts to your emotions like a pet would

This face-following robot that reacts to human emotion.

A new technique based on the Japanese art of origami helps integrate electronics into 3D structures.

Researchers are working hard to teach robots how to traverse a variety of terrains with the same ease as humans, so there’s no escape.

Not sure whether everyone would be okay with their private posts being looked through and tagged for AI.

Nest to turn off their API

Really sad news… Nest is disabling their APIs. Once they do, you won’t be able to get data out from the system to use elsewhere as it’ll be contained within the Works with Google Assistant ecosystem.

Sonos will launch Google Assistant on its smart speakers next week

They’ve already got Alexa, so soon Alexa will have company!

That’s a lot of devices huh?

This is a pretty darn cool addition to the 60,000 smart home devices! I need one!

I’ve lost track of the number of ways people have found to make PCBs by this point!

This add-on brings the potential for building AI-at-the-Edge applications on a Raspberry Pi!

Wyze cameras are a fantastic low-cost option for security, and they’ve now got sensors too. Here’s Stacey Higgenbotham’s take on them.

A (solder) bridge to nowhere: what is a solder bridge and how to avoid them in PCB design

All About Circuits looks at what solder bridges are and how to avoid them.

2019 State of The AR Cloud Symposium and Showcase

Open AR Cloud are running a full day event on AR Cloud technology at San Jose. I’d go if I was in the area as this is a hugely important area in the future of technology! The coupon code OARCPromo will get you US$15 off!