Wednesday, May 29th, 2019 by Patrick Catanzariti

This week, we had so much Oculus Quest news, including one bunch of developers who got multiplayer working! One robot can write in languages it’s never seen before and deep fake tech goes to the extreme working off a single image! 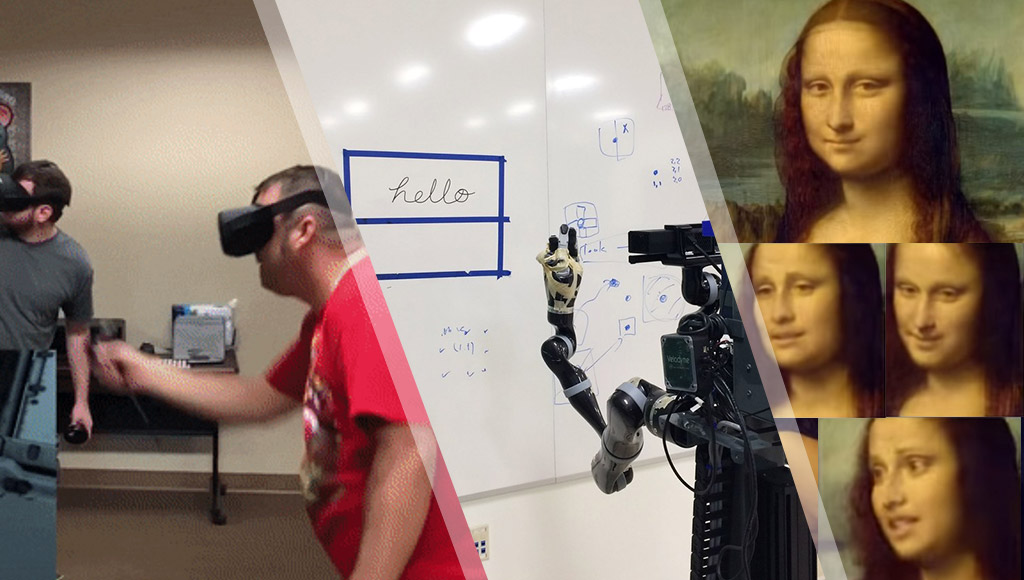 The Ghost Howls blog has a comparison of the two standalone VR headsets.

Some are experiencing tracking problems and other USB issues such as blackouts.

Always great to see WebVR stepping up to new heights!

They found it wasn’t a good idea.

The global head of R&D at PlayStation discussed the future of VR.

The battery life is currently around 2.5 hours but it’s possible to extend it!

You’ll need a VR-ready PC and ALVR — and it won’t be perfect… but it’s possible.

“It appears that the Oculus Quest has a secret menu with a sideloading update”.

What happens when you turn all games into VR games

A pretty reasonable look at what types of games work when brought into VR and what don’t.

These developers used the Oculus Quest to create a location-based VR game inside their office!

A really good list of what to try if you’ve just got your own Oculus Quest headset.

Apple is in the top 3 in smartglasses… with no product

Apple ranked as the third most important smartglasses platform after Microsoft HoloLens and Magic Leap in a recent survey of AR/VR industry insiders.

Niantic’s view of the future of augmented reality

Ross Finman, head of AR at Niantic, spoke about the future of AR at GamesBeat Summit 2019.

This AI can recreate lifelike motion from just a single frame of a person’s face — which means we can even animate painings.

Is that a kid browsing? This company says its artificial intelligence can tell

Rather than ask if you’re a child, this AI can supposedly work it out.

“After training to hand-write Japanese characters, the robot could then copy words in Hindi, Greek, and English just by looking at examples”.

Will robots ever be better caretakers than humans?

There are a lot of robots on the way to help take care of us.

About 25% of calls placed through Duplex start with a human and that about 15% of those that began with an automated system had a human intervene.

Labrecon is a web-based graphical interface and IoT platform

It’s being crowdfunded on Kickstarter right now if you’re curious.

The IKEA LEDBERG RGB LED strip from IKEA isn’t perfect, but this gives it a bit more capabilities!

This can charge up a 12V lead-acid battery using a solar panel.