This week, we have a new Amazon Echo Show (with a privacy shutter!), Siri, HomePod and CarPlay all are getting upgrades, we’ve got more VR/AR headsets, Dominos has a new AI-powered camera to check pizza quality and more! 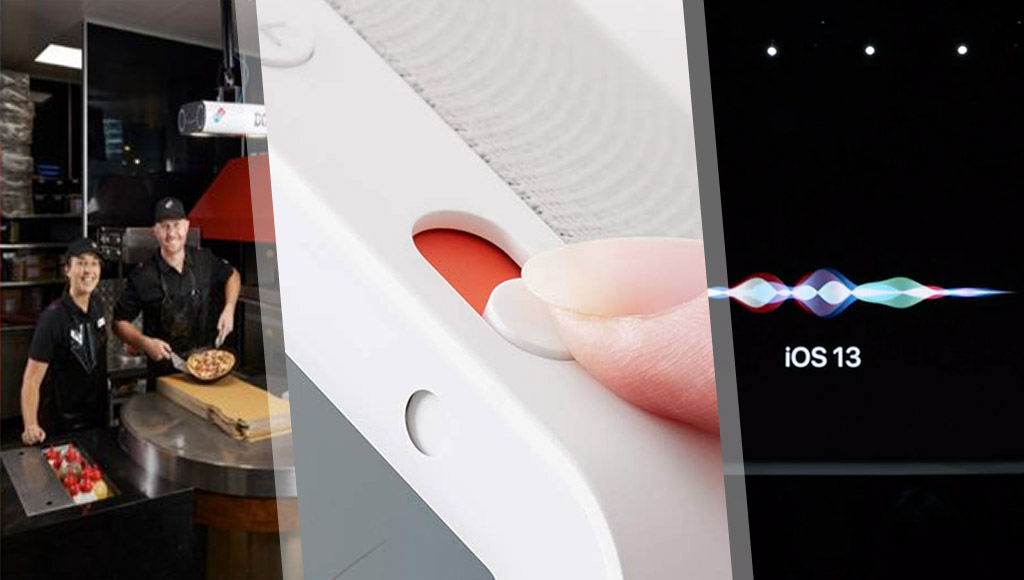 Dominos has a new AI-powered camera to check pizza quality, the new Amazon Echo has a privacy shutter and Siri’s voice will be improving!

Oculus Quest shortage is a good sign for VR

I totally agree… signs are looking really good for VR right now with really positive reviews and a lot of sales for the Oculus Quest!

This VR/AR headset uses a camera to show you the real world with human-eye resolution and then puts virtual elements into it — making them indistinguishable from real-life. Neat idea. Likely to be expensive though.

Pathfinder: A first look at the best fonts and vector graphics on VR/AR

How fonts and vector graphics look in VR is pretty darn important!

“A video from Derek Ham shows his latest take of a magnetized accessory for the Oculus Touch that connect and align the controllers along a single axis”.

Fans of the game might be excited to hear it has Labo VR support on the way. “This latest update changes the game by allowing players to view the action from a variety of unique angles.”

This is the second generation of HP’s Windows Mixed Reality VR headset.

The Nreal Light Consumer Kit has a 1080p, 52-degree field of view and a 3DoF controller for that price. All in a portable form factor!

People occlusion means that people can appear in front of virtual objects in the AR environment, it can also track up to three faces via the front/back cameras and supports simultaneous capture from both cameras.

Native support for Unreal Engine 4 for the HoloLens 2 on early access on GitHub.

Meta rises from the ashes under new ownership, along with a new CEO

A new owner called Meta View is in control of Meta’s assets and are starting a new official refresh. They’re supporting the Meta 2, but won’t be selling any more of it.

Ultrahaptics acquired Leap Motion on Wednesday, no word on whether it will affect Project North Star, their AR headset, yet.

Samsung reportedly has ‘multiple’ AR and VR products on the way

We’re not sure what they are, but hopefully we’ll find out sooner rather than later.

It seems unlikely to be revealed at WWDC, here’s all the reasoning behind their previous launches.

The M400 smartglasses are US$1,799 in an early adopters program.

Dragon Quest is receiving its own Pokemon Go-style AR experience

A closed beta for “Dragon Quest Walk” launches in Japan later this month. No word yet if it’ll go beyond that, but Dragon Warrior Monsters was my favourite Gameboy game back in the day, so this would be cool!

The Mojo Vision 14K PPI Display might be the smallest, densest display ever and could be used in smartglasses or pave the way for smart contact lenses.

Google rolls out new AR features for its Lens app

The Looking Glass Factory has a new lightfield display for enterprise — this is where you can have holograms on your desk rather than in a headset.

There’s an option available for those wanting to run machine learning on lower powered devices like microcontrollers!

All About Circuits has a roundup of the latest trends in robotic navigation.

How to write engaging dialogs for Alexa skills

Many don’t realise how much of a different skillset is involved in this – so it’s great to see Amazon have a guide available to help.

Getting to know you: designing trustworthy artificial personalities

This article asks an important question — “How can we create task-oriented but not transactional bots?”

Can we give AI the ability to form memories? The basics of hyperdimensional computing

The theory of hyperdimensional computing is a pretty curious one!

The DOM Pizza Checker is an AI-powered camera watching all the pizzas before they go out to check their quality. It’s a really smart use of AI and hopefully will improve their consistency.

The Amazon Echo Show 5 puts Alexa on a smaller screen, shipping in June for $89.99

More importantly for some — it has a physical privacy cover for the camera! The first Amazon Echo device to do that! They’ve also added a new way of deleting what you’ve said to the device so you can delete it by telling Alexa to do so rather than going into the app.

Siri gets a better voice and new AirPods and HomePod features

Siri will soon have a more expressive voice and the ability to send SMS messages over AirPods. A video of the new voice tech is here at The Verge.

I love this. Always so fun to see old school devices reworked with smart tech!

Ecobee has upgraded their previous SmartThermostat.

Hackster had a nice demo by phpoc_man of sending a message to Facebook Messager if a door is opened!

Introducing Particle episode 1: Watch and learn what it takes to be an IoT hardware engineer

What every IoT engineer needs to know about navigation: GPS, dead reckoning, cellular, Wi-Fi, and BLE

Building a navigation solution is a challenge, luckily Particle have a guide which looks at your options!

6 ways to design for circuit board rework

“Learn why you should design for rework — and 6 easy ways to do it”.

More than 500 drones ‘perform’ in light show in China

Over 500 glowing drones gave an incredible futuristic light show over a Chinese city. Thought that’d be a nice way to end this newsletter. It’s a must watch!