This week, we have Cards Against Humanity… but generated by AI! We’ve also got the release of the new Valve Index PC-powered VR headset, the ability to try on fancy expensive Gucci shoes in AR and more! 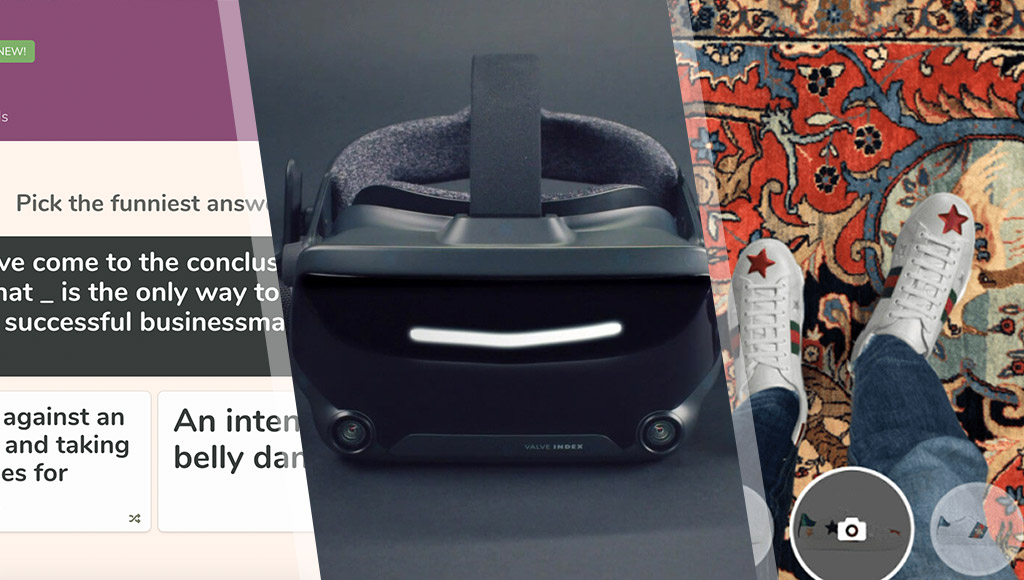 AI Against Humanity, the Valve Index and trying out Gucci shoes in AR!

They’ll have “10 different VR environments for you to try and relax in, including a sauna, a koi pond at an ocean-side resort and a ski cabin with a crackling fireplace”.

Doctor Who: the Edge of Time — Daleks and Weeping Angels come to life in VR

“Doctor Who: The Edge of Time Maze Theory is taking you a little deeper behind the scenes of the VR game for PSVR, Oculus Rift and Quest, and HTC Vive”.

Mondulia Studio is the app for immersive music creation

Music creation and live music performance in VR — available in Early Access in the Oculus Store.

90 hours of VR gaming on Twisted Reality’s KAT Walk Mini is good for you.

Jony Ive is leaving Apple! This quote around the news speaks of AR glasses as a matter of fact now, not a rumour — “The design team has been working on augmented reality glasses that would give users visual displays of messages and maps. It continues work on annual updates to Apple’s existing products”.

While not exactly subtle — it’s a neat DIY creation!

The smartphone maker revealed the Vivo AR Glass as part of their 5G product lineup.

This is the start of being able to tap into services from other skills within your own.

MIT made an AI that can detect and create fake images

You can now add more to what Bixby can do, just like you can do with Alexa and the Google Assistant.

All that hand waving which makes no sense to a lot of us makes sense to this machine learning algorithm!

AI looks at what the cat dragged home so you don’t have to!

If this man’s cat brings home a dead rat — his machine learning powered cat door doesn’t let the cat in.

AI created a 3D replica of our universe. We have no idea how it works.

Well — they modelled it using a traditional computer model of the universe, so they know that bit. What they don’t know is how it worked out how to model on new parameters like how much dark matter should be in the universe (which is common for machine learning results).

Dimitris Tassopoulos made a very very simple neural network example and ran it on an Arduino Uno which processed it in 114.4 μsec!

It’s all a part of a big report that hopes we’ll be able to focus on trustworthy AI.

It’s like Cards Against Humanity but within an AI-driven browser game!

This is the start of automated machine learning processing of data — so one day you might not need to be super technical to get some answers from your own sets of data.

A very curious look at just how much Amazon is becoming interconnected into our lives — especially from a surveillance perspective.

Want to test that your battery still has a charge? Here’s a DIY battery tester!

Three things that surprised me when moving my smart home gear

Stacey Higgenbotham writes a very honest overview of her experience moving her smart home gear into a new home.

Yay for companies working together on standards!