This week, we’ve had a woman implant her Tesla key into her arm successfully, one circus trading in real animals for holograms, bungee VR, Apple is doing super well with wearables and lots more! 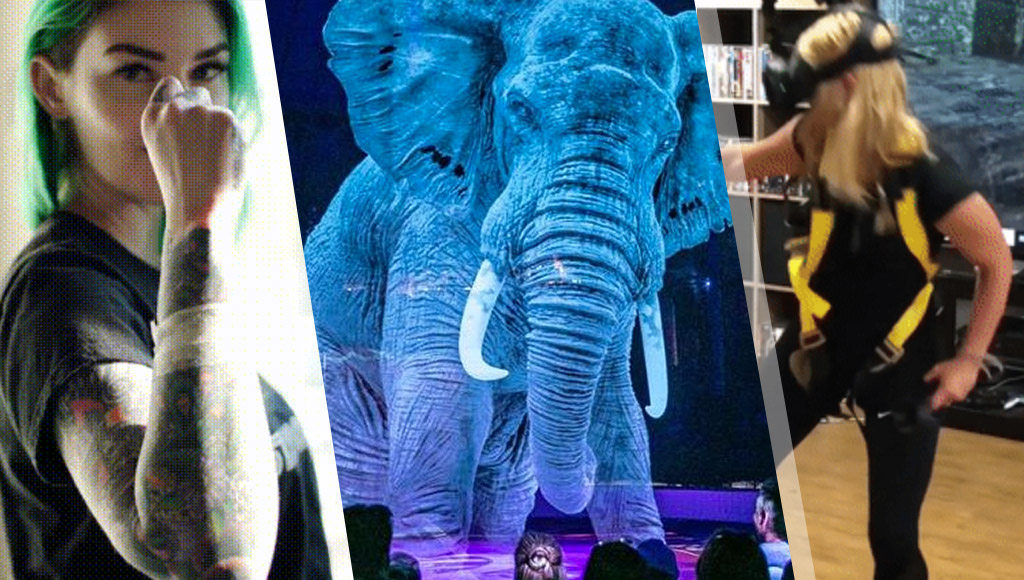 Vulkan support means lower level access to the GPU, better performance, less drain on the CPU and allows for access to multicore CPUs.

Virtual production: putting the latest UE4 tools through their paces

Unreal Engine has a new tool that can add special effects in real-time, rather than using a greenscreen or post-processing.

Custom elements for the immersive web

“Weightless VR is an in-home bungee system that grants you total freedom of motion while in VR, allowing you to run, swim, leap, and dance with nearly zero restrictions”.

“Researchers have used immersive virtual reality to observe the effects of talking to themselves as if they were another person”.

Using VR to treat pain and anxiety isn’t a new idea, but this group are trying it out during labor.

We’ve looked at this team before at Dev Diner — it’s an exciting AR headset focused on tabletop games where the whole display concept is done quite differently. Worth checking out!

Snapchat is raising $1 billion in support of AR, new acquisitions

Why is making good AR displays so hard?

An article by Daniel Wagner, the CTO of DAQRI, explains why he thinks we won’t see much FOV improvement too soon.

Automation will create problems in the enterprise — AR can solve them

The AR Live View directions on Google Maps are rolling out to iOS and Android devices that support ARKit and ARCore — so you might see more people holding their phone up to the street… that aren’t playing Pokemon Go, they’re just lost.

The Galaxy Note 10+ will have a depth-sensing camera that will give it more AR potential.

The curious future of bringing AR into the mix for children’s toys is already here and this is the latest example.

Wearables are working out well for Apple — “one out of five gadgets that Apple sells is now a wearables device”.

Apple Watch dominates smartwatch space ahead of Samsung and Fitbit

As we said, Apple are doing pretty darn well.

For those keen on having more control over their fitness tracker data.

Arduino watch is an impressive feat of miniaturization

An Arduino watch that works and isn’t super bulky!

It’s an alternative to Android and will soon be on smart speakers and smart screens from the company too.

Biohacker implants a transponder in her arm to start her Tesla

She can now start her Tesla with the power of her arm.

It has an average 90% success rate in detecting a pest or a disease to prevent a whole lot of damage before its too late.

Watch a drone take over a nearby smart TV

I can see this growing as a wonderfully annoying prank in the coming years.

This research aims to bring transparency to social media feeds.

As some expected, Europe are asking questions about their human review process too — but Amazon have added in the option to opt out now.

Deepmind, the AI company owned by Google, is spending a whole lot of money and has no plans to stop any time soon. It’s the cost of research and development in an emerging area!

Audio and video generated by AI can impersonate CEOs — many aren’t thinking about audio deepfakes as much as they should. Would you question a deepfaked phone call from your boss?

Facebook is building tech to read your mind. the ethical implications are staggering.

Vox looks deeper at Facebook’s plans and what they might mean.

These robotic hands can sense and fix damage without human intervention.

Apple hit with lawsuit over ‘unlawful’ grading of Siri recordings

They’re accused of “unlawful and intentional recording of individuals’ confidential communications without their consent”.

Revealed: Microsoft contractors are listening to some Skype calls

Similar to the controversy that has hit Apple, Google and Amazon — Microsoft also have humans listening to some Skype calls that use the translation function and Cortana. While I think it’s necessary for us to have humans help train these systems, it’s worrying that it’s so easy for a Microsoft employee to hand over recordings to the press.

Can robots find stable footing if a branch is covered in Teflon?

“Researchers have figured out how to reliably create questions that challenge computers and reflect the complexity of human language”.

There are seven speeds — so you can finally get Alexa to slow down a bit if she talks too fast for your liking.

Use an Arduino to build this real chiptune synthesizer

Vintage sound chips produce some very cool chiptunes — and now you can make it happen on an Arduino!

BarryNet is an open-source deep learning platform that runs locally on the device.