This week, Tilt Five AR’s Kickstarter has been going fantastically, Waymo are looking to start offering robot-taxi with no safety driver in Phoenix and we have a look at Samsung’s AR headset patent! 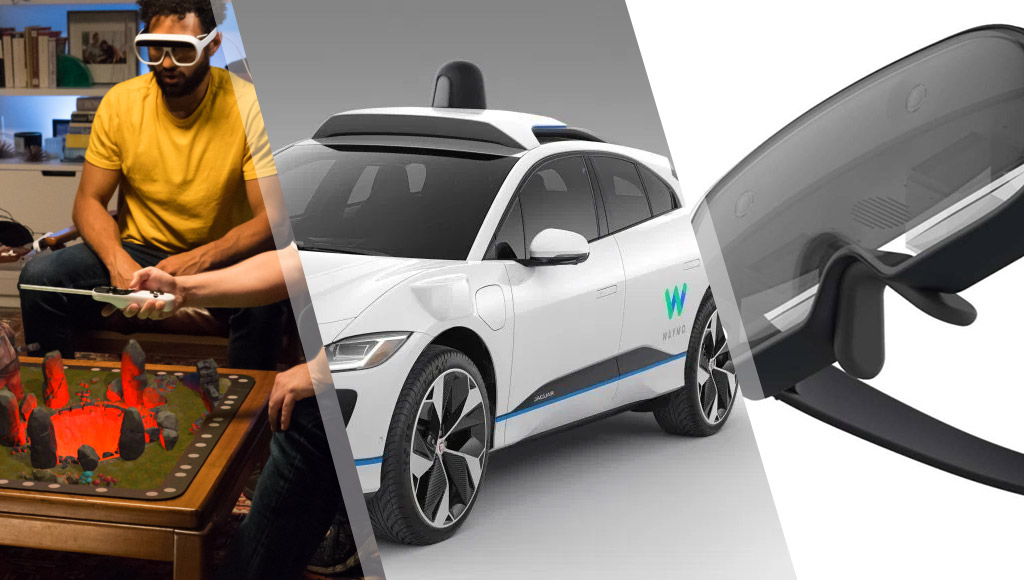 Oculus Link specs will be made available to third-party manufacturers

Oculus will be releasing the specs for its Oculus Link cable so anyone can make one, potentially allowing other manufacturers to make one cheaper than the official US$80 one.

PlayStation VR 2: everything we know about Sony’s next VR headset

Wearable cover what information is out there at the moment for the PSVR 2.

Microsoft shows off prototype VR controller with force-feedback for grasping

“Microsoft Research showed off a prototype VR controller which provides force-feedback for grasping small objects with the thumb and index finger”.

Use a VR headset paired with a massage chair to relax in a soothing 3D experience.

uGlass: an AR module on your glasses

uGlass is a DIY AR module to attach to any regular glasses using lots of hot glue, microscope slides and generic OLEDs.

At over US$1.5M, the Kickstarter is on track to set a record for the most-funded AR platform! Great stuff Tilt Five team!

There’s a new Samsung AR design patent out and it looks like it might be using similar tech to the ThirdEye Gen X1.

Alphabet has made an offer to buy Fitbit

Alphabet (Google’s parent company) has reportedly made an offer to acquire Fitbit but we have no details yet.

Fitbit and SpO2: two years on, we’re still waiting for the health sensor to be turned on

Fitbit included an SpO2 sensor to improve its health tracking but it’s still lying dormant and not being used (likely due to regulation).

Facebook AI Research has created the “first machine learning system that can stop a facial recognition network from identifying people in videos”.

“The main board is an Arduino shield which outputs step and direction signals to stepper drivers. The gears are cycloidal and it appears there’s even some custom machining going on.”

Uber unveils a new look for its food delivery drones

They have rotating wings for increased speed!

How AI is impacting the automotive world

“From manufacturing to infrastructure, AI is having a foundation-disrupting impact for auto manufacturers, smart cities, and consumers alike”.

An interesting piece from The Next Web on why one author doesn’t think a conscious machine is possible.

An algorithm is now better at finding tiny brain haemorrhages than human experts.

These startups are building tools to keep an eye on AI

“The software can help developers constrain their creations so they don’t make bad decisions”.

“Researchers have presented a swarm of tiny drones that can explore unknown environments completely by themselves”.

The BBC is launching an interactive voice news service for Alexa that’ll let people in the UK skip stories or ask for more details.

Amazon will let you pay bills with Alexa

US Alexa enthusiasts will soon be able to ask things like “Alexa, when is my water bill due?”, “Alexa, compare my electricity bill to June last year.” and “Alexa, did my payment go through?”.

“Infosec vigilantism can cause serious harm in the era of industrial IoT and connected medical devices”.

Hackster looks at the official port of TensorFlow Lite for micro-controllers from Google and Arduino — it now has gesture and image recognition models.