This week, we have a new exploit for smart speakers using lasers, cats need robots too and there’s a Kickstarter for that, Facebook have a technique for deriving 3D data from 2D images and more! 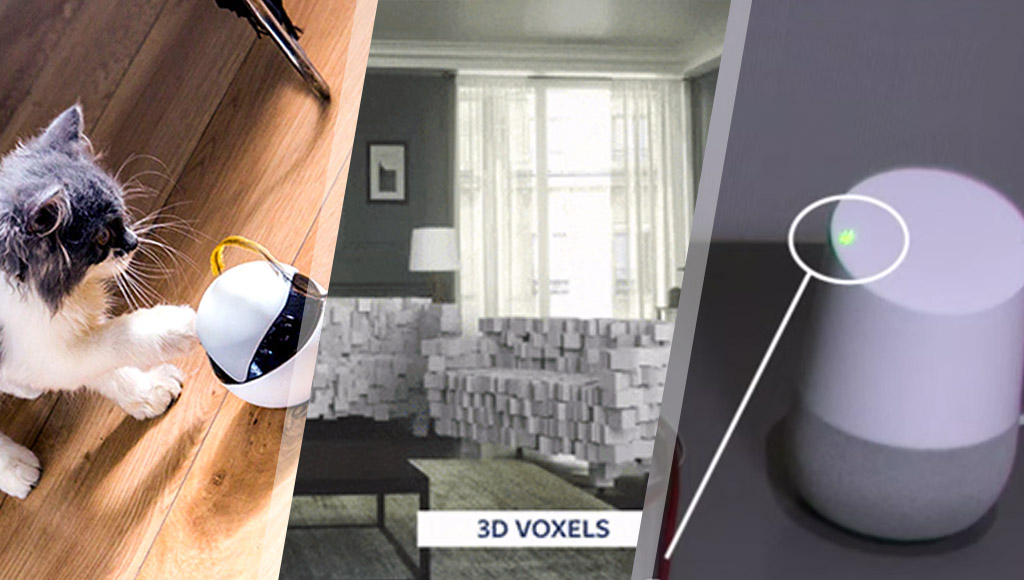 Chrome 78 has just rolled out and Chrome 79’s Beta emerged including one very cool addition — WebXR on by default!

This is part 2, but part 1 is linked within the post too. This could be valuable for those with CAD drawings and such they’d like to bring into VR.

Aero was quietly released on iOS this week, letting users create AR directly through the app without no coding necessary.

It’s from the same site that said Apple had cancelled plans for AR earlier this year… I’m hoping this second rumour is the more accurate one!

The SDK will be available for Lumin OS as well as Unity, Unreal, iOS and Android so you can build apps that work between Magic Leap One and mobile devices!

You can now design AR snaps straight from your mobile device

3D Paint is now in the iOS Snapchat and lets you create your own AR snaps straight from the app by drawing into the scene or onto your face!

“Facebook researchers now claim to have prototype mechanisms that can now derive an object’s 3D shape based on its 2D image information”.

Tilt Five “now lives with the likes of Oculus Rift, Bragi Dash and the Avegant Glyph as a Kickstarter project that has convinced thousands of backers to part with big bucks.” Go Tilt Five!

Alphabet has announced it is acquiring Fitbit, which is massive news! This is their official announcement, only time will tell what it will truly mean for the company. It’ll go ahead assuming all goes well in terms of regulations.

Speaking of regulations, one Senator says the deal “will only make a big player bigger, and personal data even more unsafe”.

Fitbit buyout explained: what Google really bought for its $2.1bn

Yep, that’s how much they’re paying! Wareable looks at what they’re getting for that huge amount of money.

“Motorola partner brand eBuyNow has resurrected the 360, which runs Wear OS, and is powered by the Snapdragon 3100 processor, with 1GB of RAM on board to hopefully bring performance up to date.”

Machine learning appears to be able to map which musical qualities trigger what types of physical and emotional responses in us!

Here is a motor driver board big enough to drop into an electric vehicle!

They’ve worked out how a robot can figure out the location of a front door, “without being provided a specific map in advance”.

Robot bees can crash into walls without taking damage

Soft muscles prevent the bots from taking a bruising, but will it survive a human hand as it swats it away?

Flying drones on the Moon and on Mars with a glove sounds pretty darn fun. Good reason to go apply to be an astronaut everyone!

This part in particular sounds incredible — “Each time he selected a new lighting effect, it would cast a different pattern of shadows, highlights, and colors across the subject’s face, as if someone was rearranging the room’s lighting around him”. You can request for early access here.

If you need a way to generate some slightly terrifying imagery, this tool will do the trick just nicely.

The Smart Robot Companion for Your Cat

Because cats need robot friends too.

The new Actions on Google site

Google has a new website for their Actions on Google resources — they’ve updated their docs to make it easier to build for Google Assistant.

This is the first exploit which could become a problem over time — if your device is within eyeshot (or laser shot). Luckily they’re working with all the companies to come up with alterations to microphone tech to prevent it over time.

At US$130, The Verge say that “the Echo Buds are worth a look even if you never use the Alexa features”.

A really cool DIY project on Hackster that lets you close vertical blinds at dusk and open them at dawn (with Alexa integration and manual override!).