This week, we’ve got rather confused cats seeing their owners’ AR filters, Lenovo has a new AR headset, Fitbit has new sleep tracking features on the way, John Carmack steps down as Oculus CTO and two executives leave Magic Leap! 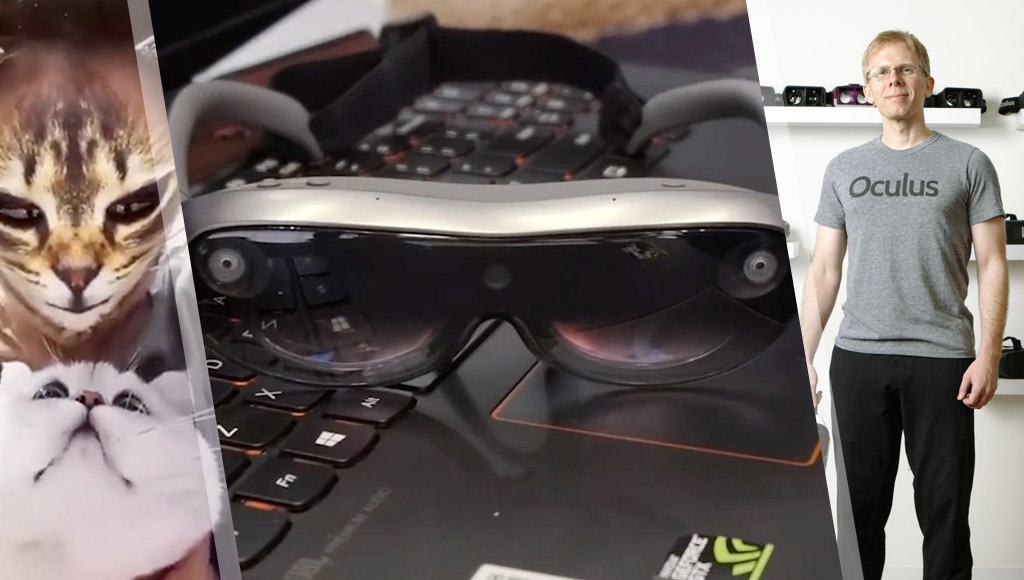 Oculus Link for PC is live: everything we know about cables, GPU support

The beta for being able to use your Oculus Quest as a wired VR headset is now live — you’ll need to use your own cable for now but the official Oculus Link cable is coming soon.

He wants to make his mark on the challenges of AI instead.

It looks like the time has come and Oculus are moving beyond Gear VR development.

“A new approach to foveated rendering uses AI to imagine the pixels in your peripheral vision, cutting down on actual pixels sent over a video stream”.

Half-Life: Alyx is going to be revealed November 21st at 10am Pacific Time and will be their feature VR game — shall be exciting to see what Valve has produced!

Is virtual reality the next big thing in art therapy?

“Researchers have conducted a study to see if virtual reality can be used as an expressive tool in art therapy”.

Curious to see who won some of the VR Awards for 2019?

How does AR/VR feel for animals?

This video compilation on Twitter shows a range of cats’ reactions to when their owners have augmented reality cat masks on. This is a must watch.

This new compact AR headset can simulate multiple Windows monitors — very similar to what Meta was aiming for. Looks cool!

“Researchers at the School of Engineering and Informatics of the University of Sussex published a paper detailing a method for displaying tactile holograms without an AR headset”.

A curious look at how Magic Leap and Spotify see music streaming looking in a mixed reality world.

Building a camera that can see Wi-Fi

A very different sort of augmentation on our view of the world… what if you could see Wi-Fi? This project managed just that!

Finally Fitbit will be able to wake you at the best point in your sleep cycle!

The Blocks modular smartwatch is a rather sad story, this article looks at what happened and the aftermath.

This article was worth it just for the incredible featured artwork at the top, but also covers some really curious ideas!

A new web-based API is ready for developers to try out to extend what Aibo, with both a visual programming (like Scratch) and a more typical API to work with.

A pretty detailed look at how neural networks are exploited — valuable to know if you want to be able to build in a way that defends against that.

“mTiny can teach the core concepts of coding, without sticking your kid in front of a screen”.

Why is Google slow-walking its breakthroughs in AI?

Is AI in a golden age or on the verge of a new winter?

VentureBeat asks, “Are we headed for a golden age of AI, or will the technology hit a wall over the next several years and lead to a new winter?”

This AI system is 99.6% accurate at predicting seizures which could help a lot of people out there.

This 2,000-year-old cartoon figure was rediscovered by IBM’s Watson in Peru

It turns out AI is good at revealing drawings that have since faded by erosion.

“An updated analysis from OpenAI shows how dramatically the need for computational resources has increased to reach each new AI breakthrough”.

Researchers teach robots to use inference to complete complex tasks

Researchers propose a new technique that teaches robots to infer goals from actions.

Google’s Creative Lab wants to let you see how close you can come to matching Freddie Mercury’s vocals.

Cooling off your Raspberry Pi 4

Here is how you can cool off your Raspberry Pi 4 with a range of cooling solutions including firmware updates.

A recent paper “shows how just about any capacitive sensor can work as a multitouch sensor with nothing more than an Arduino although a PC running processing interprets the data for higher-level functions”.

A whole lot of people use a Raspberry Pi as a media player, here’s a simple implementation for those keen to try something straightforward.