This week, we had a change to Facebook policy bringing Oculus user info into the realm of ad targeting, Oppo announced an AR headset, Samuel L. Jackson is finally on Alexa devices (in the US) and we had some cool VR experiences come out like “Where Thoughts Go”. 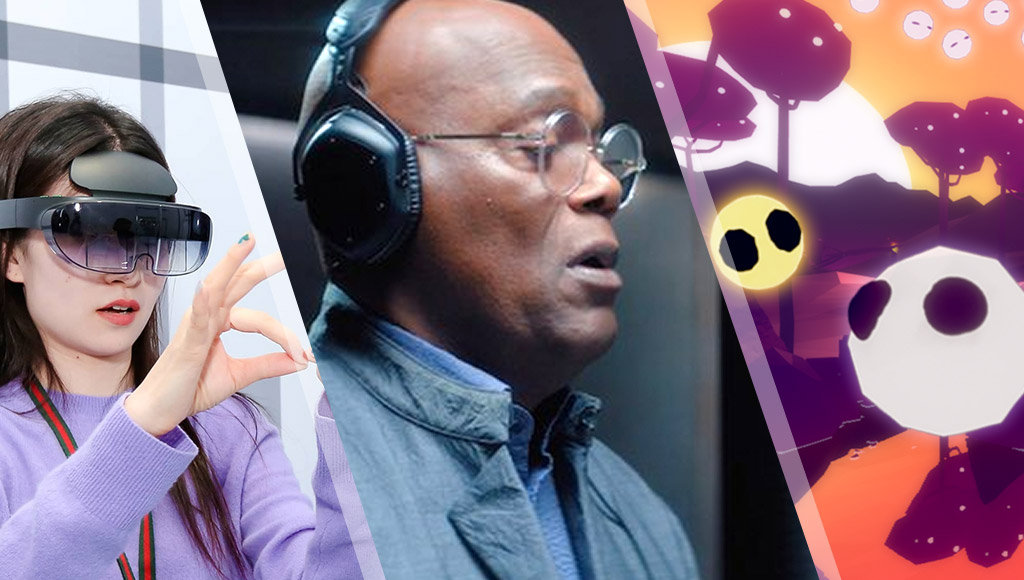 WebXR is the new standard for VR and AR on the web — and it’s really hitting its stride! Here’s a nice look at where things are at, including some useful tools for those getting into it.

VR sales on the upswing, thanks to Facebook’s Oculus Quest

CNet say that “virtual reality may be starting to grab people’s attention” thanks to the Quest. We’ve been saying that for a little while now!

In this VR experience, you record and share personal voice messages via orb-like audio creatures. It sounds really cool!

“Healium is a platform that uses virtual reality, augmented reality, and wearables like the Apple Watch to reduce anxiety”.

Oculus now has text chat but you have to have your Oculus ID linked to your Facebook account. That, however, means ads as per the first link above.

It has new game modes and a Green Day music pack — definitely riding high as a successful VR game!

These experiences (and a few bonus mentions!) all provide a bit of education amongst the VR experience.

Discover on desktop or mobile. Enjoy in VR, only with Firefox Reality.

You can now send tabs from your phone or computer straight to your VR headset using Firefox Reality!

There’s the potential for some cool creations to happen here!

Hands-on: this is how Magic Leap’s voice control works via the new Lumin OS update

“Oppo revealed that it will put the Snapdragon 865 and 765G chips in its next flagship mobile devices, just two days before Qualcomm announced its Snapdragon XR2 platform for AR headsets and smartglasses”.

The Intellivision Amico will include two touchscreen controllers and launch with around five retro games.

Fitbit and Google deal under scrutiny by Justice Department

The US Justice Department are looking into the Google buyout due to concerns about Google getting all of Fitbit’s user health data.

Wearable technology can track all sorts of things!

When it comes to just wearable bands — their shipments “grew 65%, year over year for Q3”. Xiaomi tops the list, with “74% versus this time last year”.

Silicon Valley is listening to your most intimate moments

Bloomberg had a thorough look at the history of the drama behind all of the voice assistant services’ listening to user recordings for training the system.

IBM Watson exec on AI virtual agent providers: ‘no big players, except for us’

“Rob Thomas says that IBM is the only serious provider of big chunks of AI for enterprises and the company’s multi-cloud, neutral strategy is paying off”.

5 areas of focus when adopting AI in your organization

Here are five areas Venturebeat say “you should focus on to get your company’s AI initiatives soaring”.

Why are so many AI systems named after Muppets?

You might not have noticed, but there is a pattern.

Google’s AI chief wants to do more with less (data)

“Jeff Dean says the company is trying to build systems that have general smarts, rather than highly specialized intelligence”.

When and how to build out your data science team

Here’s a guide for deploying Jovo voice apps on Amazon Alexa and Google Assistant with CloudFormation.

It is a separate skill though, so you will need to say “Alexa, ask Samuel L. Jackson …”. You can’t change Alexa to be him permanently.

Roland’s Alexa-powered keyboard is available for $500

“The GO:PIANO’s Alexa voice control lets you tweak the sound without missing a note”.

“What if you could crowdsource the connectivity of smart sensors by offloading it to smartphones?”

Citizen has a fancier alternative to Amazon’s Alexa wall clock

It’s “a Smart Clock that can accept Alexa commands through other devices to set timers, much like its Amazon counterpart, but offers a more stylish package that could better fit in with your decor”.