This week, we had robots galore from CES (robot cat, robot ball, robot yoga instructor… and more!), more headsets announced from Pimax, a DIY augmented reality browser made in Unity and so much more! What a start to the year!

Wanna hang out and talk about some of the latest emerging tech news? Got questions? Well, something new is coming in 2020 here at Dev Diner. It’s on Twitch. Pilot episode is happening Tuesday 21st Jan at 7:30pm Sydney time (9am Tuesday in UTC!). We’re gonna have fun and figure it out as we go. You heard it here first as a thank you for being a newsletter subscriber! 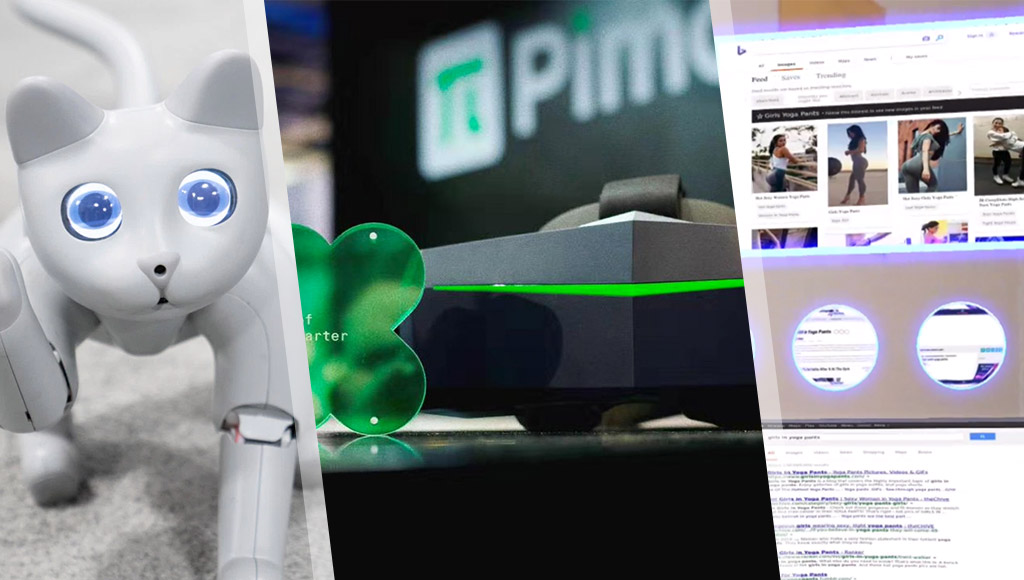 Robot cats, Pimax VR and an augmented reality browser made in Unity

Pimax reveals a new lineup of SIX VR headsets — the cheapest of which is under $500.

Is virtual reality not suited to visual memory?

Researchers have found that VR may interfere with visual memory rather than help with effective learning.

These VR goggles are pretty fascinating, here’s VR Focus’ thoughts on them.

The price reduction includes both kits.

Let 2020 be your year of lots of neat VR experiences!

At CES 2020 this week, VRgineers announced a new version of its XTAL high-end headset for enterprise priced at $7,890, including business grade support.

“A recent study assessed how some common virtual reality movements contribute to muscle strain and discomfort”.

A new batch of legal filings have emerged in the first two weeks of 2020 leading to the companies going into mediation for now.

Really neat use of Instagram AR filter in the real world!

A lot of people think Pokémon Go had its peak ages ago, but 2019 brought it a whole lot of revenue!

This developer put it all together in Unity — this is a really nice and thorough look at the process they went through!

The sorry state of AR startups in 2019

TechCrunch on AR in 2019 — “Even when Apple telegraphs its hardware strategy, it’s proving to be nearly impossible for startups to beat them”.

DJI brings back the Phantom drone, a year after it vanished from stores

It sounds like they had a parts shortage that is solved!

“The distinction between actual AI and fake or algorithmic alternatives is important, but marketers are blurring the lines in ways that everyone may regret”.

This is incredible. “They’re neither a traditional robot nor a known species of animal […] It’s a new class of artifact: a living, programmable organism.”

“Essentially the research team taught the AI to unpack mathematical equations much in the same way that we do for complex phrases”.

This is worth considering whenever you’re designing for conversational AI.

An AI system that detects positive comments about disenfranchised groups in online posts sounds like a nice idea.

The AI system uses satellite images and reportedly outperforms traditional models, even at this early stage.

AI can detect low-glucose levels via ECG without fingerprick test

This is invaluable and could improve so many lives.

Computers are learning to see in higher dimensions

Curious — “researchers have delivered, with a new theoretical framework for building neural networks that can learn patterns on any kind of geometric surface”

Why TinyML is a giant opportunity

Being able to run machine learning on a microcontroller means so much of our devices are going to be able to REALLY become smart devices in the coming years.

Meet MarsCat, a robot cat with lots of love to give and room to grow

An autonomous robot cat you can program further yourself — it’s on Kickstarter right now for US$699 and they claim it’ll be shipping from March. It runs on a quad-core Raspberry Pi!

An exclusive look at Samsung Ballie

If cats aren’t your thing, you could get a robot ball — or get both and get them to play together!

Or do some yoga with this robot instead.

How they made: world’s first cheeseburger robot

2020 — the year robots seem to start doing absolutely anything.

“A court in Shenzhen, China, has ruled that an article produced by AI is protected by copyright, representing a notable milestone for AI as a creative force”.

Why scientists are flying drones into clouds of whale snot

Export controls threaten the future of AI outposts in china

“As restrictions intensify, it will become more difficult for American companies to maintain labs in the talent-rich country”.

“Intel researchers recently investigated whether a machine learning model could be used to identify peoples’ facial features in thermal imagery”.

Using robots for the tough decisions.

There are a whole lot of smartwatches and fitness trackers being used right now.

Pulse oximeter: why spo2 and blood oxygen will be huge in 2020

Wareable look at what a pulse oximeter is and why is it a big deal for wearable tech.

A look at how to keep your ESP8266 going for a whole long time!

“The ability to get professionally manufactured PCBs, at least small ones, for dirt cheap has had a huge impact on the sort of projects we see”.

The way of the PCB artist: how to make truly beautiful circuit boards

A nice reminder that it can be fun to make PCBs!

Want to make your own fitness tracker?