This week, we had our first official live Dev Diner stream on Twitch! We also had smart contact lenses, an incredible spatial computing demo, lots of ways to print with Arduinos and lots more!

That’s Tuesday 8:30am UTC time! We go through the upcoming newsletter’s stories, chat about them and tinker with tech live on air! Last week we had the Vector robot, ASMR with Alexa and Meri Amber sang us a hilarious song about robot cats. Come join in the fun! 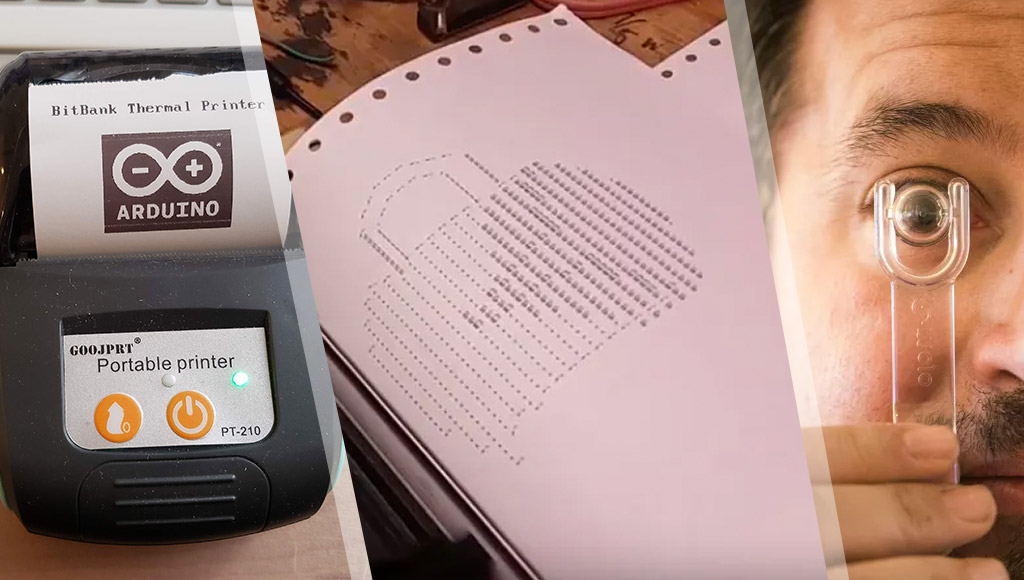 All sorts of printing with Arduinos and a smart contact lens prototype!

One of our favourite devs, Brennan Hatton, has put together an infinite dungeon train game for the Oculus Quest!

My predictions for virtual reality in 2020

SkarredGhost’s thoughts on where things are going in 2020.

This tech lets you track your head and feet using their custom trackers.

This VR game was rejected by Facebook for Oculus Quest but passed 50,000 downloads on SideQuest.

Wished you could play laser tag on Rec Room on the Quest? Now you can!

‘Iron Man VR’ is delayed until May 15th

You’ll have to wait a bit longer for this one!

You can play “Until You Fall” for free this weekend if you’re looking for something to try out!

Wareable has some pretty positive words about the Valve Index — which is somewhat like a superpowered HTC Vive.

There’s no guarantee it means anything, but it’s curious.

Pixel Ripped 1995 is coming to the Quest… but the original game, Pixel Ripped 1989, has been denied on the Oculus Quest for unknown reasons.

Enter the TARDIS in ‘Doctor Who’ VR special ‘The Runaway’

You can now watch a non-interactive version on YouTube, but it sounds like it’s also up on Steam, Oculus Store, and VIVEPORT for use on Oculus Rift and HTC Vive.

While it’s not ready for prime time yet, this technology from Mojo Vision looks like the future of AR.

This is a fantastic example of spatial computing. You’ve gotta watch the video!

Sounds like Mr Cook is still keen on AR.

Higher-resolution enterprise AR headsets would be more appropriate for those times when you kinda need the details… like surgery.

“Some of the earliest HoloLens 2 adopters have complained about color problems with the AR headset’s displays, and Microsoft is now looking into the reports”.

“While most Snappables games use the front-facing camera to insert users and their friends into the game, Scavenger Hunt flips gameplay to the rear camera”.

This new technique appears to make better quality deepfakes — check out the video in this one to compare.

They’ve purchased Xnor.ai, a company doing image recognition on the edge… taking it away from Wyze cameras.

I don’t agree with everything said in this article, but it shows the privacy concerns are still very active and there’s still more voice tech needs to do to ease worries.

It is inspired by fruit fly biology and “outperforms classical algorithms at tasks like generating hash codes”.

Tesla has a whole lot of onboard stats, so I assume they have the data to back this up.

I literally mentioned this same thing in my Twitch stream last week! Talk about timing! “The computing power required for AI landmarks, such as recognising images and defeating humans at Go, increased 300,000-fold from 2012 to 2018”.

Worried about privacy at home? there’s an AI for that

Edge computing and edge AI are going to help a whole lot with not needing to send everything off to the cloud to send smarts back.

More people would trust a robot than their manager, according to study

He wants “AI to be regulated while simultaneously encouraging lawmakers towards a dilute enabling framework that does not put any hard limits on what can be done with AI technologies”.

Initially it didn’t sound too bad as this sort of tech is going to get out there, but the danger here seems to be the company running this database appears to be a bit shady.

Are we on the cusp of an ‘AI winter’?

AI isn’t going to keep growing at the same rate forever, so it’s understandable it might be slowing a bit.

“The Picterra platform helps you build your own AI detection model through a graphic user interface in just a few steps”.

“In a research paper, Baidu details AdvBox, an adversarial toolbox for testing the robustness of AI and machine learning models”.

Pigeon-inspired drone bends its wings to make it more agile

“The PigeonBot could lead to drones that can manage tight turns and fly through turbulence”.

“Amazon detailed the AI underpinning Alexa’s Whisper Mode, which responds to whispered speech by whispering back” — you’ll see this in action in each of the Dev Diner Twitch streams!

“Facebook’s PyTorch Mobile and PyTorch libraries for text, audio, and vision are getting upgrades in version 1.4”.

This is a pretty cool Arduino library to draw text and graphics on BLE thermal printers!

ASCII art from a vintage printer connected directly to an Arduino

If thermal printers aren’t your thing, what about a vintage Kodak Diconix? This is equally cool — worth watching the video for this one too!

An open source effort to encrypt the internet of things

Coming up with an open source standard for IoT encryption is a valiant endeavour but I worry it’ll just be another standard added to a list of other standards. It could help those who otherwise wouldn’t have solid encryption in their devices though.

“The list was shared by the operator of a DDoS booter service” — make sure you change your devices’ default passwords!

In a quiet rollout, it appears that some Ionic, Versa series and Charge 3 trackers are providing blood oxygen reports within the app. My app doesn’t seem to have it just yet.

Clearly this is just the start of the advancements in 2020!

Fitbit has been busy!