This week was yet another massive week for VR and AR. At Mobile World Congress, Samsung staged an absurd S7 release complete with an auditorium of zoned out VR wearers and a sneaky Mark Zuckerberg who casually strolled through the zoned out crowd to surprise them on stage. The HTC Vive price of US$799 was announced, S7 pre-orders come with a free Gear VR, Leap Motion released a really accurate and impressive VR focused upgrade to their product and most excitingly of all — Meta revealed they’ve got a really really good Meta 2 AR headset on the way. In big IoT news, the Open Internet Consortium and AllSeen Alliance are joining forces! 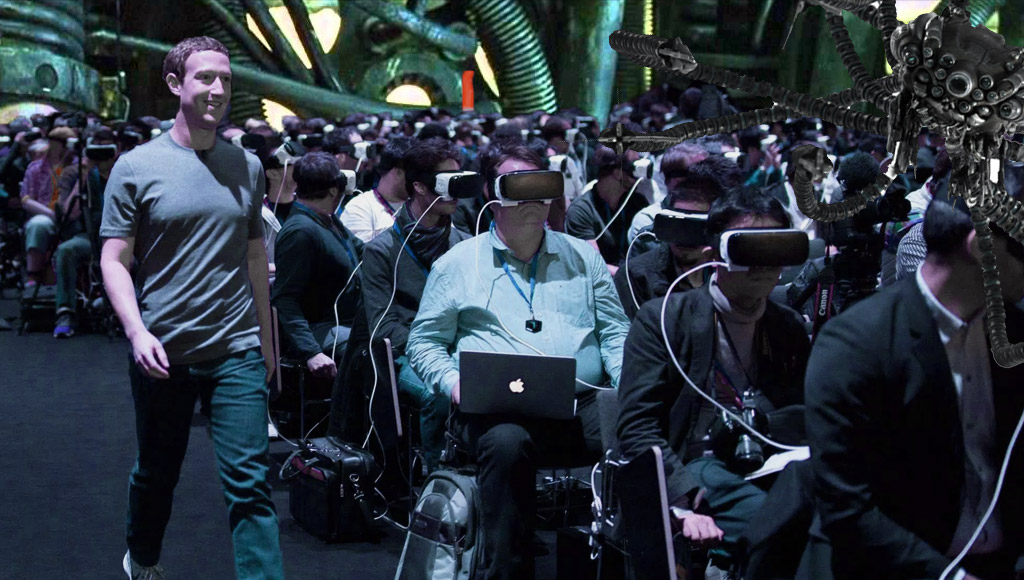 While this was incredibly entertaining to photoshop, I’d like to reiterate… this is not the start of the Matrix. It’s just a VR demo. Calm down world.

A VR Cycling Experience for $40 made with Unity, Google Cardboard and Arduino!

Here are pics of the consumer version of the Vive for those wondering what it will look like.

Wondering if your PC will run it? Valve has a speed tester you can run to really test your PC’s VR worthiness.

Mark claims it is all part of the goal to make VR more social. Facebook has founded an internal team to work on “Social VR”.

Mark also appeared on stage at the Samsung Galaxy S7 event and stole the show with people rushing to see him like he was Bieber.

Samsung’s upcoming S7 and S7 Edge pre-orders will come with a free Gear VR. Oculus CTO recommended the S7 for VR purposes as “the edge pixels aren’t quite as well used, and it leaks a little more light”.

Mark and Facebook want to help internet providers get ready for virtual reality with faster 5G network growth and more with the Telecom Infra Project (TIP).

Here’s a fascinating look at virtual reality’s potential in the enterprise.

Tactonic Technologies make pressure-sensing floor mats that can measure how you wiggle your toes & shift your weight — VR is going to get interesting with this tech.

I stumbled upon a VR podcast which might have a bunch of useful info for those keen to keep in the loop about VR — The Real Virtual Show. They are airing Episode 16 today!

If you haven’t seen it yet, I had a really good interview that is the perfect example of what I’m hoping to achieve with Dev Diner — sharing true insight and passion from developers. This interview was with Sean McBeth, the creator of Primrose, a WebVR framework. He speaks all about developing for VR and WebVR in particular with incredible passion. Loved it.

Meta unveiled their new AR headset with a greater field of view and high resolution display. It is really really exciting.

Brennan Hatton on what is so great about Meta 2 from a dev perspective!

The Microsoft HoloLens has made its way into space!

Epson announces Moverio BT-300 AR smart glasses at Mobile World Congress. The YouTube video on that article is a really nice look at some of the potential of AR in the real world.

If the Meta news has got you excited about trying out your Meta headset once again, or if you’re just interested to know what it’s like to develop for it — I’ve released a tutorial over at SitePoint on getting started with augmented reality and Meta by making a pretty AR butterfly!

Wearables are finally getting their own innovative components, rather than mobile’s pieces.

Sony Xperia’s concepts at Mobile World Congress are “wearables for the everyday world”.

The Sony Xperia Ear puts an AI assistant in your ear.

This 4.7″ organic LCD display is flexible enough to wrap right around a wrist.

A conversation between two AI as they arrange a meeting for their bosses!

A look at Demis Hassabis, the “superhero of artificial intelligence” (he’s the founder of DeepMind and a really smart dude).

IBM’s Watson can now sense emotions in your writing.

They are also bringing Watson to VR virtual avatars!

Here is the most amazing biomimetic anthropomorphic robot hand IEEE Spectrum has ever seen. Basically, it is an impressive robot hand.

On a similar topic… How to build an adorable “Wobble Bot” from upcycled cans! Nawww…

I had an opinion piece on why I believe we’ve had enough doom and gloom in artificial intelligence. I was quite happy with the amount of discussion this one brought up over on Reddit!

The BIG news, the Open Internet Consortium and AllSeen Alliance are joining forces to become one — the Open Connectivity Foundation. This is a really good step in the right direction for having one set of standards for the Internet of Things!

A new 2D semiconductor could outperform silicon. Will be interesting to see the effects this has on tech in future!

Oren Levy looks at the future of smart home payments at TechCrunch.

Here’s an interesting guest case study over at IoT Central on whether the IoT can bring advantages to remote communities with patchy internet.

Five IoT components and their challenges in an IoT Implementation.

We need to be careful in our rush to get IoT devices out there — one study found that the rush could open security gaps (and we don’t need more of those!).

I finally managed to get my hands on an Amazon Echo (just arrived this morning!), so I’ll have a guide up on how to use the Echo in Australia soon.

Thank you for being a part of the Dev Diner community by reading through this newsletter and for all of your feedback and links! I’m available via email, Twitter or Facebook! Say hi!