This week we were treated to a Raspberry Pi-powered NES system that can actually accept game cartridges (I really want to build this one!), a teardown of the Rift showed it costs just over US$206 to build, we discovered that the PlayStation VR will require 60-square-feet of space and you can now get your own holographic-style AR display on IndieGoGo! 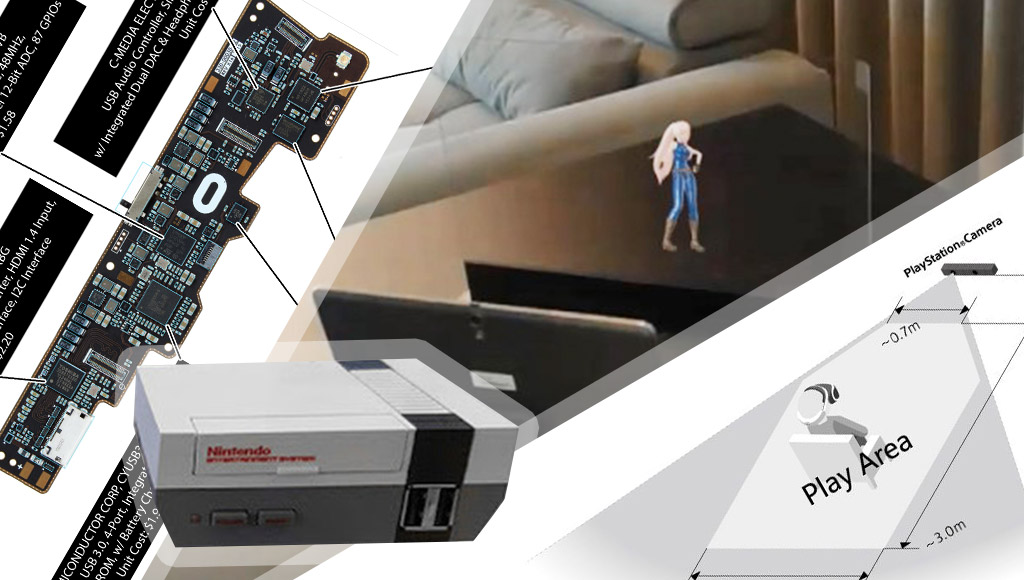 The Raspberry Pi NES system, the PSVR brochure, that holographic display and a pic from the Oculus teardown

This Oculus Rift teardown shows the headset’s total bill-of-materials to be just over US$206.

Facebook released an open-source design of its 360-degree 3D cameraearlier. Here’s a look!

Got 3D models you want to look at in VR? Sketchfab is becoming a pretty nice option. All 3D models on it now have a 2-dimensional floor so you can move around the model.

It turns out that PlayStation VR will need about 60-square-feet of space and plans to asks players to stay seated while using it. These details and more were found on a sales brochure for the device.

Leap Motion have made it much easier for developers to create their own hand assets!

Here are techniques to allow people to walk forever in an infinite VR hallway. They’re likely to be used in VR theme parks very soon.

A wonderful look at how virtual reality is set to change storytelling.

Virtual reality will not be a repeat of the 3D video debacle and here’s why.

If you’re arachnophobic, skip to the next section. Seriously. Okay, everyone else — enjoy this tale of a real life spider making its home in a Vive VR headset, providing a very different experience for its owner.

The team at Meta have put together a list of resources to learn Unity to help people get started in their quest for augmented reality greatness.

PokeFit gives Pokemon Go a real-time fitness dashboard on Android. It appears the game is becoming a potential platform on its own for add-on applications. New opportunities for developers out there!

You can now pre-order your very own holographic display on IndieGoGo.

Augmented reality then, now and what’s next according to Wareable. A good article to read if you’re only just starting to look into AR post-Pokémon Go.

Apple now plans on investing in AR in the long run after the success of Pokémon Go.

Technology can be kinda cool and yet fashionable sometimes, here are sunglasses with bone conduction speakers to transmit sound waves to your skull using vibrations!

Soon, you will be able to charge your smartwatch while it floats in the air.

The upcoming Apple Watch 2 is rumoured to use a thinner “one glass solution” display.

Where is the action in wearables? Healthcare niches.

Garmin’s stock is surging following its pivot from autos to wearables. It turns out their wearables are going great.

Researchers have made an ultra-thin, transparent transistor that could be used to make transparent wearable displays.

A new material that can be programmed to change shape when compressed by an outside force could be ideal for prostheses or wearable technology.

This is brilliant. How to put together modern face recognition with deep learning.

Microsoft has decided it can do a better iPhone camera app than Apple. How you ask? Their camera app uses AI to deliver better photos than the standard app.

They’re delving into AI in more ways than just that — Microsoft Word’s new “Editor” feature is using machine learning to provide a new level of grammar checking and advice.

If you’re looking to reduce the reliance on cloud-based AI on your PC, here’s how to reduce Cortana’s reach in Windows 10 so you can avoid the digital assistant. Especially relevant as Cortana is becoming more central to the OS after the latest update.

This creepy mechanical maggot may be “the future of robotics” according to Co.design

Meanwhile, this tiny magnetic chain is actually microscopic surgical robots. Robotics is definitely moving beyond the stereotypical humanoid bot by this point.

Speaking of surgical robots, one in three US surgeries is expected to beperformed with robotic systems within five years.

Three tips for creating a human and AI-powered chatbot.

Apple has hired the former head of BlackBerry’s automotive software division, moving towards a focus on developing self-driving technology.

The BBC asks, can machines keep us safe from cyber-attack? Darpa’s Cyber Grand Challenge this year aims to develop software smart enough to spot and fix vulnerabilities in programs before hackers find them.

The WSJ had a detailed look at AI’s long-term impact on jobs, taking lessons from history.

Are you in Sydney? If so, this is news you need to know about — a free, city-wide IoT network has launched in Sydney and IoT developers should take advantage of it!

The IoT Podcast interviewed Charlie Kindel, director of Alexa Smart Home at Amazon, about the Echo’s history and its future.

Estimote have made a bunch of updates to their platform and beacon devices recently.

If you are looking for an incredibly simple Arduino project that’s rather entertaining in its end result, why not blow some bubbles with tech? This uses a servo motor to dip a bubble wand in soap, moves it in front of a fan and blows bubbles.

There’ll be a bunch of IoT security news coming up in next week’s newsletter… the Black Hat conference (on this week) received “an unusually large number” of IoT-related proposals for security talks. Watch this space.

Unlike the official reboot, this Pi-NES system can actually accept game cartridges!

Verizon has been acquiring more than just Yahoo. Their IoT business is growing too after acquiring Fleetmatics, a truck tracking business.

To the growing numbers subscribed to this newsletter, thank you! For those looking to get in touch, feel free to Snapchat me (devdiner), message me on Twitter or just send me an email.