This week, Pebble is reportedly close to being acquired by Fitbit (still to be confirmed later this week), one person found a way to get Alexa and Google Home to talk to each other in an infinite loop, Leap Motion is going into mobile VR with new hardware and neural networks were used to generated 3D models of faces from a single 2D photo! 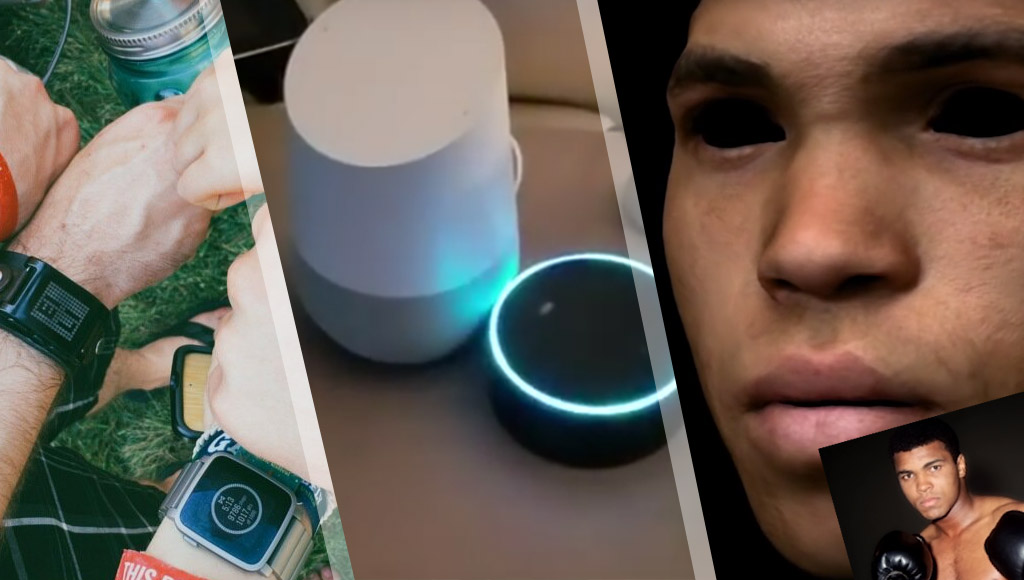 Here’s hoping the Pebble thing is just rumours… but at least the Alexa and Google Home video lightens the mood! That neural network generated 3D model is pretty darn cool too right?

7 tips for bringing others into your imagination with VR

Tomáš Mariančík, one of my favourite VR developers, spoke with me about his experience in VR development so far. Here are 7 tips from that conversation to help you get into VR dev too.

Leap Motion is going into mobile VR with a new platform and hardware with a larger field of view. Mashable has a great review.

The team at Leap Motion have begun a series exploring VR/AR design! Looking forward to it!

Identity transfer and the rise of virtual surrealism

VR’s potential to move us beyond the typical reality and its impact on self-perception is fascinating!

A very positive review of the new Rift controllers by the Verge.

HTC Vive vs Oculus Rift with Touch — Which is better at roomscale VR?

Now that both platforms can potentially do roomscale, which is better overall?

Wow. This is a pretty cool in progress project — a VR controlled suspension rig!

Looking for some reading this holiday season?

New HoloLens app Muralize is a wonderful combination of art and technology, from an all-female developer team

The Mixed Reality Revolution is here, and it’ll change your world forever

I liked this quote — “Mixed Reality isn’t just a new type of technology — it’s an entirely new plane of existence.”

Fitbit is buying troubled smartwatch maker Pebble for around $40 million

We are all a tad worried hearing that Fitbit might discontinue Pebble’s range. Waiting on a statement from Pebble on this which is expected later this week!

This piece looks at both the marketing side of Spectacles and the potential for where Snapchat is leading things.

In a similar fashion to OpenAI, DeepMind have made their maze-like game training program available for all to use.

This will be great news for many Dev Diner readers (Comma One is a popular topic here!). George Hotz has just released the previously shut down free autonomous car software and may be reviving it by open-sourcing it.

This is seriously incredible. They can generate a partial 3D model and texture of someone’s face from a single 2D photo.

Uber bets on artificial intelligence with acquisition and new lab

They’ve acquired an AI company and are incorporating them into an AI division.

Alexa, tell me where you’re going next

The VP of Amazon Alexa spoke about machine learning, chatbots and whether the industry is “strip-mining AI talent from academia”.

Yes. There is a way to get Alexa and Google Home talking to each other. Forever. And ever.

This one avoids sensitive topics to prevent a repeat of their more controversial chatbot, Tay.

Want to learn analytics? Why not get into the Internet of Things?

Perryn Fowler shares his experience using his analytics background to enter into a career in the IoT.

Five easy ways to build security into the Internet of Things

Some nice tips here for people still unsure about it all.

Welcome to the emergent era

I love one quote from this one especially — “If we choose to embrace and encourage emergent systems in business, politics, and technology, we may end up unlocking more human potential and wealth than ever before in history.”

Reimagining cities from the internet up

An interesting thought experiment on connected cities from the team at Sidewalk Labs (cofounded by Larry Page from Google). Fascinating (but long!) read.

A new competitor is entering the ring with Google Home and the Amazon Echo.

Inside IFTTT’s plan for a more harmonious Internet

They are working closer with the companies who will have applets with them and hoping they’ll fund the service.

How to publish an Alexa skill: from beginning to end

If you ever wondered how, here’s a tutorial on Hackster!

This DIY project uses two Photons to control your car windows from your phone and rolls them up once its dark. Smart!