This week, Snapchat had a pretty neat location based AR dragon in New York for Game of Thrones, Woolworths got its own robot, Oculus messed up and may have left a bunch of easter egg comments in its Quest controllers and Nintendo’s Labo VR elephant controller actually is pretty darn genius. 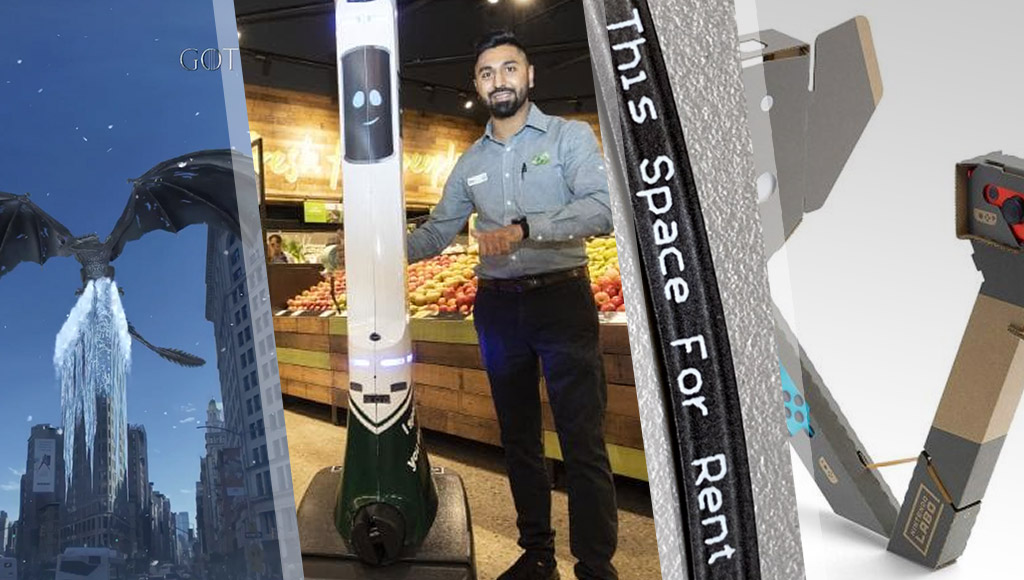 An AR dragon in New York, Woolworths has a new robot, Oculus messed up and left some odd messages and the genius of Nintendo Labo VR’s elephant

Oculus co-founder confirms tens-of-thousands of controllers may have been released with hidden messages of “This Space For Rent”, “The Masons Were Here”, “Big Brother is Watching” and “Hi iFixit! We See You!”

That elephant controller? It’s actually a pretty darn smart 6DoF controller that’ll let you draw in Labo VR and all sorts of things!

Superhot VR made more revenue than the original

It has sold over 800,000 copies and gained more success as a VR title than it did as a non-VR one!

The Doctor Who interactive VR experience has a trailer now!

VentureBeat had a piece looking at the things AR/VR startups do right to find success.

“Facebook is on the path to platform lock-in with Oculus Quest, and at this early stage of the market, it could have big ramifications for virtual reality”.

VR may be able to help with balance and motor control for those who really need it.

“This release includes some major new features including support for 6DoF controllers, new environments, a curved browser window option and some bug fixes.”

“Virtual Boy: Check out old VR in new VR” is a clip in Labo’s video section with a look at “Mario’s Tennis”.

Charlie Fink on how the world will be painted with data

Charlie Fink answered a few questions this week for Dev Diner around the AR industry and his new book, “Convergence, How The World Will Be Painted With Data”.

We’ve got some nice recorded footage on the Mixed Reality Toolkit YouTube channel showing what hand interaction is like on the HoloLens 2 — much better than HoloLens 1!

They’ll have rocket ships, planets and all sorts of space themed stuff going on above the crowd in AR.

This latest AR promo within Snapchat shows just how far their AR tech has come, it looks pretty darn good!

Google’s beta launch of their new “AI Platform” aims to “offer developers and data scientists an end-to-end service for building, testing and deploying their own models”.

Amazon is rolling out a new feature that will allow Alexa device owners to get more in-depth news if you want more than just the short flash briefing.

Amazon workers are listening to what you tell Alexa

A report from Bloomberg raised the alarms for many in the public, however having humans verify a small percentage of the audio sent to Alexa is one of the ways they train it to improve.

“As much as we want to believe that there have been breakthrough advances in AI many of the most advanced implementations of this technology, like Alexa, require a human in the loop”.

Woolworths, one of Australia’s big supermarket chains, has added a robot into one of its stores, roams around and alerts staff to spills.

Microsoft wants to unleash its AI expertise on climate change

Microsoft wants to use its tech to monitor and find insights in environmental data.

OpenAI five crushes DOTA2 world champs, and soon you can lose to it too

Soon you’ll be able to battle it out with OpenAI too.

Researchers use drones to detect potholes, cracks, and other road damage

“Researchers describe an algorithm that automatically maps potholes, cracks, and other types of road damage”.

“Harvard Medical School researchers describe in a newly published paper an algorithm that can accurately screen for certain kinds of cancer”.

Speedgate is apparently what happens when you ask AI to create a sport.

Canalys: 200 million smart speakers will be sold before year-end

These numbers are “driven mainly by growth in East Asia”.

The Maxiduino is a New MAix-Based Board from Sipeed for machine learning.

“The RoCycle robot uses sensors in its gripper to identify an objects makeup and then sort it accordingly”.

This couple hired a robot photographer for their wedding

It’s more like a travelling photobooth, rather than a wedding photographer replacement.

“Researchers have developed an artificially intelligent (AI) agent that can automatically generate natural language explanations in real-time to convey the motivations behind its actions.”

It looked through over a thousand papers to put together its very own book.

Meet Blue, the low-cost, human-friendly robot designed for AI: Blue’s creators hope the new robot will accelerate the development of robotics for the home

Blue’s goal is to be low-cost and safe enough that every AI researcher could have one.

It has less buttons as it gives a lot of that role to Alexa instead!

The ESP-RFID project “combines the diminutive WiFi-enabled microcontroller with a nice custom PCB and some exceptionally slick software to create a very professional access control system without breaking the bank”.

Spy on your smart home with this open source research tool

The IoT Inspector (available for Mac, Windows and Linux has a wait list) is a tool to let you see what your smart devices are up to on your network.