This week, we had a huge number of new Alexa devices including earbuds, glasses and a ring! There are also exciting Oculus Quest upgrades on the way, Facebook is officially getting into AR and your Amazon Echo could soon sound like Samuel L. Jackson! 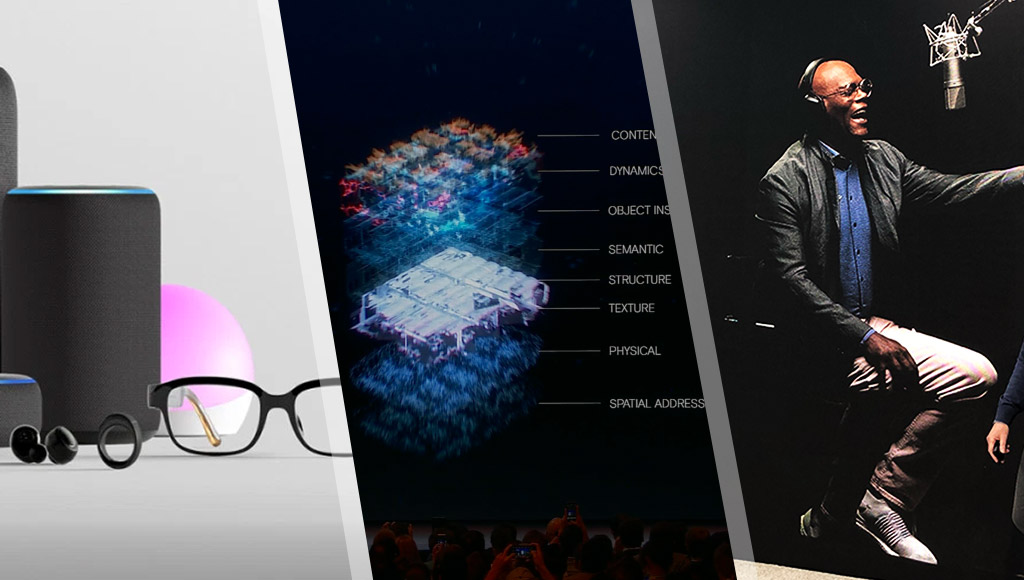 Oculus forward-compatibility got my attention at OC6

I discuss why forward-compatibility might be one of the most valuable things announced at Oculus Connect 6 for developers.

Soon you’ll be able to use your own hands in VR with no need for a controller, external sensors or gloves — all with a simple software update to the Oculus Quest.

Facebook: Oculus Link will work with SteamVR games, too

“Facebook confirmed that you should be able to play SteamVR games like The Elder Scrolls V: Skyrim and No Man’s Sky on your Oculus Quest when Oculus Link arrives in November”.

Facebook are closing down Facebook Spaces and Oculus Rooms, it’ll be replaced with an ever-expanding world where you’ll be able to create your own games, meet with people and all sorts of things.

Two new prototypes, the Half Dome 2 and Half Dome 3, were revealed at OC6 and get pretty compact with better field of view.

Samsung Gear VR is being killed off according to Oculus CTO

Keen to watch some of this season’s NBA basketball in VR? Here’s the schedule!

Mozilla Hubs are doing some impressive things with their growing web-based platform.

An artificial skin that can help rehabilitation and enhance virtual reality

Scientists have developed a soft artificial skin that provides haptic feedback and has the potential to instantaneously adapt to a wearer’s movements!

“Google’s Versailles castle VR app takes you on a private, guided tour and lets you inspect objects up close”.

Huawei says “the visual experience of this VR is enhanced by IMAX and its suitable to enjoy video and games.”

How VR can help enterprises with training, beyond firing Barry

There’s a bit of debate around whether it is okay for a VR app to train people in how to sensitively fire an older employee.

Minecraft Earth is rolling out for early access to various countries throughout October and beyond. Prepare for the hoards of people staring at their phones in random places within the outside world again.

Facebook are aiming to map the world, similarly to all the others out there (see Minecraft Earth from Microsoft above) and also have AR glasses but they’re coming in a few years. I like their visualisation for their AR world mapping endeavours.

Oculus confirms reports of coming AR glasses & cloud — but will you really trust Facebook to map inside your house?

While Facebook are eager to map out the world for AR, are people eager for Facebook in particular to map their world?

Unity had a bunch of announcements around their AR tools for developers.

AR camera effects from Snapchat’s Lens Studio are popping up in music videos.

How to create an interactive AR business card without code

Here’s a neat guide to making an interactive AR business card (thanks Justin for the tip!).

Super-interview with Jeri Ellsworth about her Tilt Five glasses, AR tech, and startups!

ScarredGhost chats with Jeri Ellsworth about her newly released Tilt Five AR glasses and the world of AR right now.

VentureBeat says, “as mixed reality evolves there will be solutions, but in order to find them engineers first need to start asking questions of themselves”.

“Engineers have developed a new augmented reality (AR) head-mounted display (HMD) that delivers a realistic 3D viewing experience, without the commonly associated side effects of nausea or eyestrain”.

At tech’s leading edge, worry about a concentration of power

AI research is getting expensive, which could make it harder for newer entrants to make an impact.

Amazon’s expected home robot wasn’t anywhere to be found in the announcements (and there were a lot of announcements)!

This Picasso painting had never been seen before. Until a neural network painted it.

With help from a neural network, researchers reconstructed an image Picasso created and painted over during his Blue Period.

The Vision AI Developer Kit is now available for US$249.

“Pope Francis warned against malicious AI and ‘barbarism’ and urged protection of the common good at a tech conference being held in Vatican City”.

“Starting later this fall, you’ll be able to ask an Alexa device, ‘Why did you do that?” and it will offer you some sort of reasoning for why it took a certain action.”

“Alexa, help me get a job at McDonald’s” is apparently a thing now.

Mozilla “believes Snapchat and Instagram could be using AI to read our emotions”.

“A new leasing program is putting dozens of robots to work in the real world”.

Amazon Alexa is already capable of identifying different voices to give personalized responses to different users in the household — now you’ll be able to use that info to identify people in your own voice skills.

Alexa gets an improved voice and can now sound like Samuel L. Jackson, too

Amazon are launching a new Neural Text to Speech model for Alexa that’ll make it more “emotive and expressive”. It’ll also be able to mimic celebrities, with Samuel L. Jackson as the first option. He’ll be available in an explicit version too. Alexa will never be the same.

Amazon have built Alexa into earbuds, glasses and a ring with the Echo Buds, Echo Frames and Echo Loop, respectively. Here’s TechCrunch’s look at all three.

What is the strategy behind Amazon’s Echo Loop, Echo Frames and Echo Buds, and why is it important?

I’ve got more details below, but this article sums up Amazon’s strategy pretty darn well. If you’ve only got time for one Alexa article this week and want something beyond just reviews and specs, read this one.

There were a lot of things announced, so if you want to find any that weren’t mentioned in this newsletter (I could fill the newsletter just with these links), check out The Verge’s list.