This week, PlayStation VR pre-orders sold out crazy fast, we’ve had a bunch of discussion over the psychological effects of VR, a sneak peek at the augmented reality Pokémon Go and a crazy-eyed robot laughingly said it would destroy all humans. 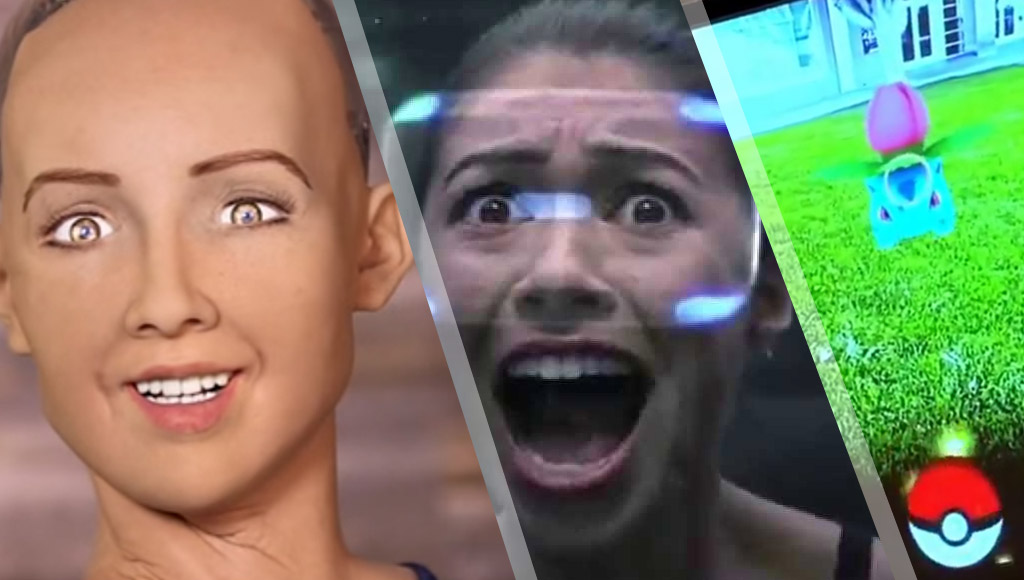 A rather strange week indeed.

BigScreen allows you to share and use your PC desktop in VR! At the moment, they’ve got a beta waiting list. I’m eager and on that list waiting!

The SteamVR plugin for Unity now has official support for mixed reality videos!

The Leap Motion team have released a new version of the Orion SDK – time to update your apps to improve their stability!

9To5Mac took Palmer Luckey’s comments on Macs to heart a bit, embarking on a plan to build a sub-$1000 Hackintosh that meets the Oculus Rift hardware requirements. This is just part 1!

Here are your options for virtual reality input devices over the next 12 months.

Here is an option for upgrading your laptop for virtual reality.

New virtual reality app “Timelooper” takes you back in history.

The “Everest VR” HTC Vive experience is so terrifying this Forbes reporter couldn’t finish it.

It might need that extra boost… this review from Gizmag is incredibly scathing of the PlayStation VR’s quality. It sounds like the capabilities aren’t quite on par with the Rift and Vive.

Despite its shortcomings, the PlayStation VR bundle still sold out within minutes on Amazon, with only a few other US stores still having a few left. It looks like EB Games in Australia has sold out, taking orders for an October shipment now instead.

If you’ve already got the PlayStation Camera and Move controllers, the cheaper bundle will be up for pre-order on March 29th.

Here’s a nice map of the virtual reality market ecosystem.

The final piece in my VR series for Make is up! It’s targeted at beginners and is all about adding interactivity. If you’ve been following along with the series, this will wrap it up neatly in a bow for you! Then, you can expand on that neat bow with my next link below!

I put together a highly requested guide on the Google Cardboard SDK update’s new “reticle”. Aptly titled “What in the World Is a Reticle? Exploring the Cardboard Unity SDK”. That reticle has confused a bunch of people!

Love this! Father.io uses augmented reality to turn the world into a first-person shooter.

The Apple Watch had a $50 price drop this week. TechCrunch look at why they think this is a good idea.

This is a potentially life saving use of smartwatches – Scientists look to smartwatches to detect and prevent strokes.

BioStamp is another great use of wearable tech, measuring vitals and sharing them with doctors in real time.

This blows my mind. In one day, AlphaGo played itself over a million times — that is more practical experience than a human player could gain in a lifetime. Wow.

Meanwhile, in a really surprising move, Google is selling off Boston Dynamics. Don’t worry though, Google hasn’t given up on robots just yet.

A very handy guide on where to go to learn Machine Learning!

This headline says it all. “Crazy-eyed robot wants a family – and to destroy all humans”.

How to quickly create a telegram bot in Ruby by Ardian Haxha at Sitepoint.

What you’ll need to know when creating a chat bot.

The future of conversational UI belongs to hybrid interfaces.

Transformers! Morphing metal is shaping the future of soft robotics.

Elio Qoshi explores Firefox OS’ pivot into connected devices at SitePoint, it’s a nice overview of where Mozilla is heading!

Arduino Day is coming on April 2nd! Check out this link to see if there is an event near you.

The security risks you need to know around the Internet of Things. Always good to read up and keep these things in mind!

Here’s a guide to installing Node.js on a Raspberry Pi (thanks to Versioning for this one!).

​Here is an overview of what business leaders should know about the Internet of Things.

It’s not every day you get to interview Cisco ANZ’s CTO about IoT innovation becoming a reality in your own city! Here’s my interview with Kevin Bloch on the new Innovation Centre at the Australian Technology Park in Sydney!

A typical day in a Blockchain-enabled world in 2030 with Crowley the Crocodile. Interesting and rather different piece!

If you’re in Sydney — or around Australia and willing to travel — there’s a big event around emerging tech coming on Thursday 7th April called Convergence. It aims to bring a range of industries together, including IT, telecoms, consumer electronics, media and entertainment. There are some great speakers and plenty of tech demos too! Grab a ticket right here.

Thank you all for staying in touch and being a part of the Dev Diner community by subscribing to this newsletter! I’m available via email, Twitter, Facebook and Snapchat! Say hi!