This week we hit a milestone! Issue number 50! 50 issues later, there’s still no sign of emerging tech slowing down, if anything it’s ramping up like crazy. A new Gear VR headset, an upcoming Intel-depth sense-like camera for the Vive, TiltBrush brushes that react to audio, MIT magic that allows you to push and pull objects in videos, no more HoloLens headset approval process and a tonne of scary security findings from Black Hat and Def Con. Happy 50th everyone! 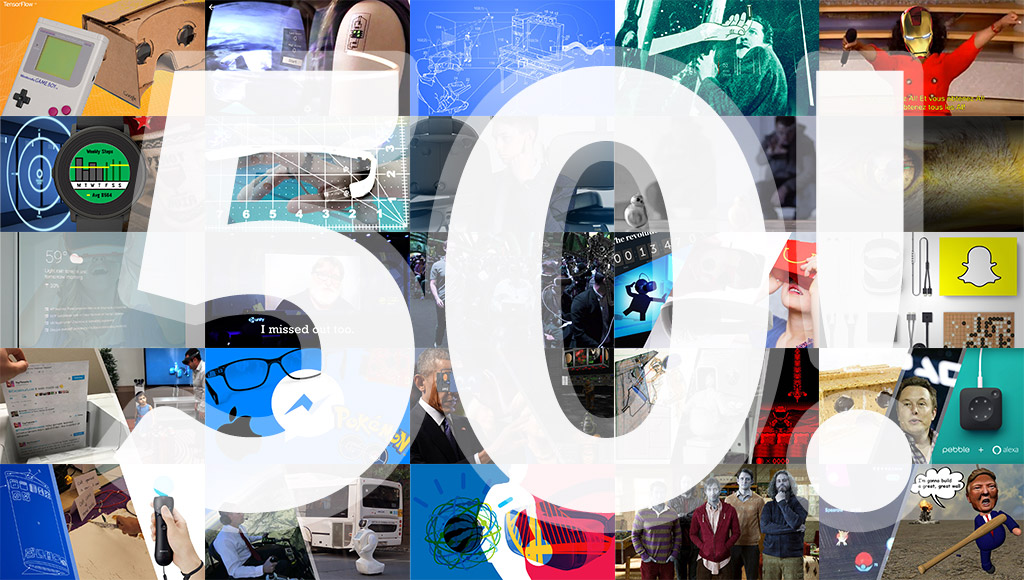 The new Samsung Gear VR is blueish-black, has USB-C, a wider field of view and a new touchpad. You can pre-order it on Samsung’s US website if you’re in the US. Not sure about other country release dates just yet!

Samsung’s Gear 360 VR camera will also get a US release on August 19th.

Leap Motion have put together a nice basic overview of how to get started building Leap Motion-enabled VR projects with their various modules.

Intel has hinted at a unicorn-shaped depth camera modification for the HTC Vive.

HTC will be launching a new “Viveport” app store for non-gaming VR content. If you’re building VR content that doesn’t fit under gaming, you’ll want to submit it to the Viveport store.

Google has introduced Audio Reactive Brushes into TiltBrush and they look like a LOT of fun.

The first face-tracking virtual reality headset is up on Kickstarter! Bring your facial expressions into your social VR experience.

Another of the potentially innovative VR headsets, Fove, has revealed a new build for their upcoming eye-tracking VR headset and no longer will support Valve’s lighthouse tracking system (I’m rather disappointed on that last point!).

The PlayStation VR price may seem economical but is misleading says the head of HTC VR in China.

Netflix has its first original VR content up… on YouTube. It brings a scene from “Stranger Things” into 360 video.

Random bit of news but a nice one to throw in here — one British man has decided to cycle his way across Britain — in VR.

HTC is partnering with Alibaba Cloud to tackle the difficulties of VR bandwidth.

Finally, my favourite VR video of the month — Someone spotted an incredibly advanced form of VR motion simulator in Thailand. Have a watch… it’s fantastic.

I put together a thorough, honest look at Pokémon Go’s actual impact on the augmented and mixed reality industry and what lessons developers can take from it. I know there’s been way too many Pokémon Go articles online, I’m hoping this one actually delves into the issue more thoroughly and would love your thoughts!

A really nice and detailed look at how mixed reality improves learning.

In “Interactive Dynamic Video”, MIT uses algorithms to allow you to push and pull video objects! Some seriously game changing stuff for AR right here. Snapchat would go nuts for this.

Baidu Is launching a new AR platform for smartphones.

Legendary Entertainment, the company behind Warcraft and Pacific Rim have grand aims for mixed reality, they’re working with Microsoft’s HoloLens and have invested in Magic Leap.

Wish you could have a chance to hear what Magic Leap are planning? Well, luckily, they’re starting to talk more publically about their product. Here’s a talk that reveals at least a tiny bit of their strategy and how the mixed reality device is different to the competition.

The upcoming new Gear S3 smartwatch will feature an altimeter, a barometer, a speedometer and an integrated GPS.

The Ticwatch 2 smartwatch looks pretty neat and is getting people pretty excited. Features a bunch of new UX ideas.

While I would not be willing to wear this around, here’s a pretty neat ESP8266 smartwatch prototype!

Rumours say that Apple just might be releasing a new gadget to monitor health in 2017 that is separate from the Apple Watch.

People.ai uses machine learning to predict how to close sales deals based on past success.

Car component supplier, Lear, has a unit coming that will allow cars to talk to smart cities and other vehicles.

A Russian professor claims that they are on the verge of “a major breakthrough” in AI.

Want to learn the basics of AI? This primer on AI from IBM for the White House is fantastic and incredibly detailed.

Some visual tips for creating your first Facebook Messenger chatbot.

Comma.ai has open-sourced the data it used for its first successful driverless trips.

At Black Hat 2016, data scientists used machine learning to help them with data security in fascinating ways… Including singing its very own Taylor Swift song?

Machine learning was also used incredibly effectively for the opposite side of things too at Black Hat… hackers revealed a machine learning-powered Twitter phishing tool that catches two in three users.

Also at Black Hat, the massive security risks brought about by drones was revealed. There’s a lot that hackers can do with drones. It’s kinda scary.

The Your.MD chatbot provides simple diagnosis of health issues. It correctly diagnosed my cold and I assume would work well for slightly more complicated issues too!

The Shoka Bell is a connected smart bell for your bike with a navigation system, light and motion alarm. It’s already fully funded on Kickstarter and looks pretty neat.

One hacker at the Black Hat Conference was able to take control of Phillips Hue lights from 20-70 meters away. Especially worrisome was his ability to use a drone to go around and do this to office buildings. Another security researcher has been looking into the possibility of creating a worm that spreads from bulb to bulb but they haven’t reached that just yet.

12 out of 16 smart Bluetooth locks were vulnerable to simple hacker tricks at DEF CON. Not good at all.

Make has a guide on how to develop a sellable Bluetooth Low-Energy (BLE) product!

Finally, yet incredibly excitingly, the team behind Cayenne, a drag-and-drop IoT project builder, have partnered up with Arduino — bringing drag-and-drop functionality to Arduino! I’m super pumped to give this a go when I have a chance!

To the growing numbers subscribed to this newsletter, thank you! For those looking to get in touch, feel free to Snapchat me (devdiner), message me on Twitter or just send me an email.