This week, the major players in VR formed a global VR association (yay!), it turns out one of those Magic Leap videos was just CGI (sigh…), there’s a third-party mixed reality headset coming for iPhone next year, we found out why Pebble collapsed and Google will soon have a new IoT platform! 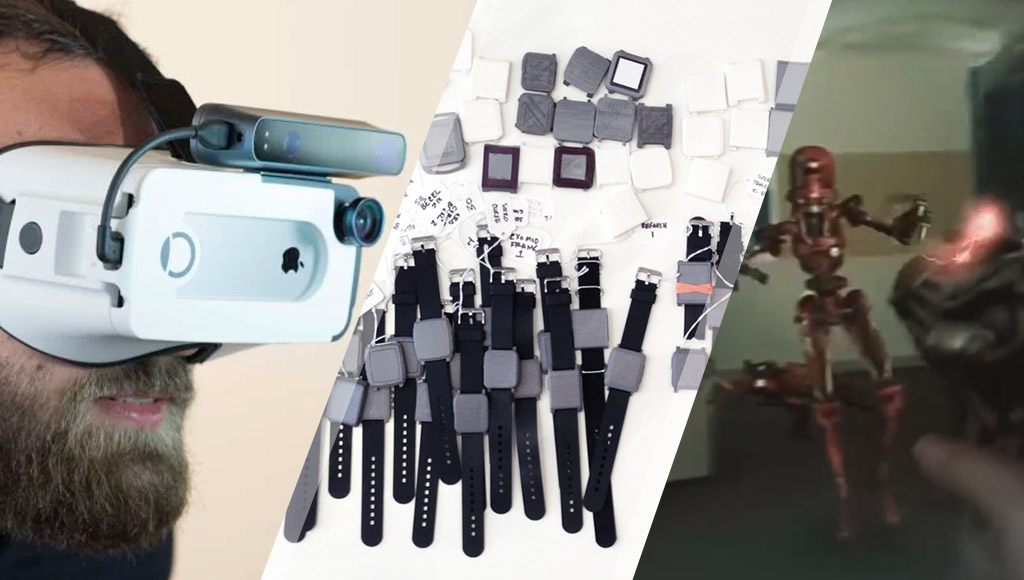 Mixed reality iPhone wonder, what is likely to be the final Pebble pic in our newsletter and a scene from the misleading Magic Leap CGI demo.

What emerging tech are StartCon startups most excited about for 2017?

We explored StartCon and asked emerging tech startups what tech they were most excited about for next year. This video shows what they each said!

They are forming the Global Virtual Reality Association (GVRA) which aims to “unlock and maximize VR’s potential”. We’ll have to see what that means!

VR headsets from ASUS, Dell, HP, and more coming in 2017, will run on Intel Integrated Graphics

How to get a job in VR

DayZ creator on VR development: ‘There is no money in it’

He says the industry currently relies on subsidised development and wants to change the perspective of those who accept that funding.

Leap Motion look into the ways we can interact with virtual objects.

Their goal is to help loneliness and isolation in long-term stay patients.

There is no such thing as bad VR.

“To think that we know anything about the right or wrong ways to do virtual reality after such a brief exposure to the medium is to multiply ignorance with arrogance.” – Mark Pesce

Oculus are splitting into two teams, one focused on PC VR and one on mobile VR. Brendan will be leading the PC VR team.

Netflix VR for Daydream is now available on the Play Store

Google’s Daydream platform is starting to build up its app ecosystem.

Magic Leap is actually way behind, like we always suspected it was

Incredibly disappointing news but it is likely to be the first reasonable and realistic report on Magic Leap in a long time. That super cool video of them shooting aliens with the Magic Leap in their office? It was just CGI. Sigh. Here’s the CEO’s response. It’s exactly what I’ve been hoping AR companies would stop doing…

A great thought piece on how we’ll design interactivity for mixed reality apps.

Occipital shows off a $399 mixed reality headset for iPhone

Next year, you’ll be able to use your iPhone in a mixed reality headset with its own external camera that is like Google’s Tango camera but with a higher framerate.

Blippar wants your face in its app

Blippar wants to add facial recognition into its apps, with the community adding their faces themselves.

HoloLens will be out on the battlefield it appears!

Updated Hologram placement with Unity 5.5 and the HoloToolkit

The process for developing a hologram placement script has changed.

It’s official. Pebble is dissolving. It isn’t being bought by Fitbit, instead, some of Pebble’s talent is being bought by them. The rest of Pebble, its ecosystem, its devices… they will be no more. Kickstarter backers of the upcoming devices should receive a refund later this week.

The inside story behind Pebble’s demise

Pebble’s CEO talks about what went wrong and why Fitbit were the go-to buyer.

What a story! One ex-Pebble employee’s tales of how it changed his life.

The gadget apocalypse is upon us

Here is what is going on with our wearable, IoT and other gadget ecosystem. It has been tough!

Wireless earbuds with real-time voice translation are on Indiegogo.

Kevin gives his view of AI and why we don’t need to worry.

We are one step closer to our self-driving future!

Twitch finally adds a smarter tool to take on bigots, racists, and trolls in chat

They’re using machine learning to try to take on the trolls.

A handy list of tips and definitions for deep learning (not really a “cheat sheet” but still useful!).

The fourth industrial revolution: a primer on Artificial Intelligence (AI)

This goes into a nice amount of detail behind the lead up to AI! Worth a read!

An interview with Jack Clark from OpenAI on AI today and into the future.

Google is no longer developing its own self-driving car: report

They’ll instead be partnering with car companies.

If you’re looking for funding for a new AI startup, here’s a new place to look!

Google’s IoT platform has had an update with a new “Android Things” platform and updates to Weave.

The Guardian are looking for projects to feature — share your wacky creations with them!

Alexa is moving into all sorts of interesting devices!

Google Home’s door is open to developers, but users have to wait outside a little longer

Want to build things for Google Home? Looks like they’ll be opening up early next year for developers!

The IoT ecosystem is hopefully getting more collaborative!

These toys don’t just listen to your kid; they send what they hear to a defense contractor

The headline is a little misleading but the way these connected toys have been built is worrying. They’re horribly insecure and potentially breach child privacy law. This is an important lesson in what not to do.

An interactive map of IoT organizations

Self explanatory really. Could be handy!

It costs $24 and is Arduino compatible with ATmega128 and ESP8266 chips. Also has OTA programming. Could be cool?

What an interesting project idea.