This week was a big one! One company claims they can make a VR headset with “human eye resolution”, Microsoft’s AI reached the maximum possible score on Ms. Pac-Man, we finally have brightly coloured chicken and bear themed smart speakers on the way from Line and — most excitingly of all — Mario Kart VR is coming exclusively to an arcade in Japan. Book those flights! 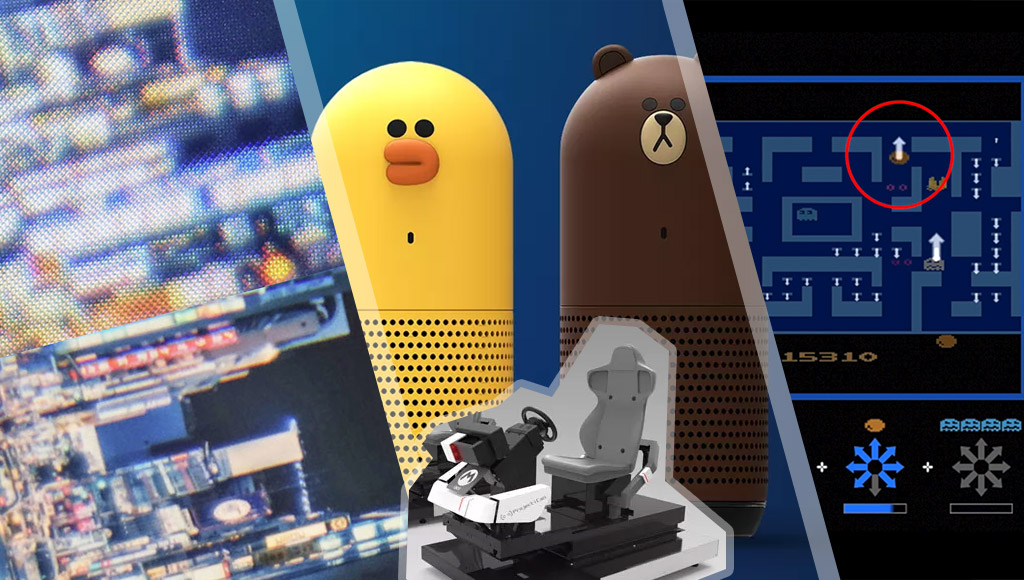 Sadly, you’ll need to go to a VR arcade in Tokyo but… it looks so good.

They claim a 70 megapixel resolution! If true… this is HUGE.

I tried Intel’s true wireless VR, and now I refuse to go back to cables

Their SpatialStories platform will help new VR and AR development.

Hot and cold: Heatmaps in VR

Google are providing heatmaps for creator analytics in their 360 video content on YouTube. Could be useful to see where people are looking in your vids.

The team at VirZoom have brought their desktop-based VR exercise bike system to mobile VR! We spoke with them a while back, great team!

Engadget at E3: How video games and film are merging inside VR

“Door No. 1” on Hulu will let players direct the action.

The PlayStation VR version of the game got high praise here!

Sony held back on PlayStation VR marketing because of supply issues

Apple just created, and killed, a generation of AR businesses

Regular readers of the newsletter are likely to have been anticipating this very thing for a while. It looks like Apple might indeed be on this path!

Manufacturing of production units is underway but still has to pass hardware, software and operational quality checks.

This talk from Inspire Track at AWE USA 2017 looks at the future of AR.

How to use multiple markers for a larger and more stable augmented reality.

How to make consumers understand VR/AR

Sophia believes that the medium overall should be called “Immersive”.

Virtual reality telescope by the Seine shows off medieval Paris

Location-based AR/VR transports people back to the year 1628.

Confused by all the smartwatches? Wareable have updated their top picks.

A look at another of the options out there in Android Wear land.

So many choices in Android Wear’s ecosystem by this point!

Teaching the joys of STEM with robots and multiplayer programming

StarLAB is a fantastic Raspberry Pi-powered kit designed to help students get a start in robotics!

Hopefully good signs for our AI-powered future, if this is actually true.

They used reinforcement learning to play the Atari 2600 version of Ms. Pac-Man perfectly and achieve the maximum score possible of 999,990.

Google advances AI with ‘one model to learn them all’

Google quietly released an academic paper on how to create “a single machine learning model that can address multiple tasks well”.

Their open-source research AI unexpectedly created its own unique language.

Facebook’s AI teams have had a productive week!

AI on your lock screen

The lock screen is fast becoming how people get info, good AI will take advantage of this — consider it when building any mobile AI apps!

AI is “pretty much the only tech breakthrough in the past decade, maybe even longer, that demonstrates touchable, tasteable, real-life, concrete, measurable ROI”.

What connected car makers can learn from the IoT sector

This is part two, if you haven’t read part one, it is here.

Apple didn’t discover AI in 2017. it just started talking about it more

So hopefully, there’s plenty more smart people working on AI over there!

Japanese messenger, Line, is making their own Echo competitor.

They haven’t completely shut it down like others reported a while back.

How figure 1, the “Instagram for Doctors” app, plans to introduce AI

Use this kit and your Android phone to build a robot air hockey opponent.

Advancements in robotics will be reaching our fast food soon.

Amazon has launched The Dash Wand, a new US$20 handheld barcode scanner that adds things to your Amazon cart. It also comes with Alexa.

What a world we shall live in!

A great look at how Adafruit came about.

Partnering with The Things Network, they’ll be putting LoRa platforms all around their town!

Want to set up Raspbian on your Pi without needing a monitor and mouse? Subhajit has a tool in development to do just that! Very cool.

One button restart of a stalled Raspberry Pi Zero W

Handy! “Avoid SD card corruption on a non-responsive Pi using an Arduino to log into the serial console and restart your Pi from the root account.”

Will Apple’s “smart speaker” enter into homes worldwide on mass?

By 2021, global IoT spending is expected to total nearly $1.4 trillion, according to one research firm.

Got questions on emerging tech? Feel free to DM me on Twitter, Snapchat me (devdiner) or just send me an email and ask! That’s what Dev Diner is here for 🙂