This week, Samsung’s 4K all-in-one VR headset design was revealed, Apple’s patent for tech to track hand gestures emerged, a Sydney man implanted his travel card into his hand and Volvo admits their self-driving cars are incredibly confused by kangaroos. 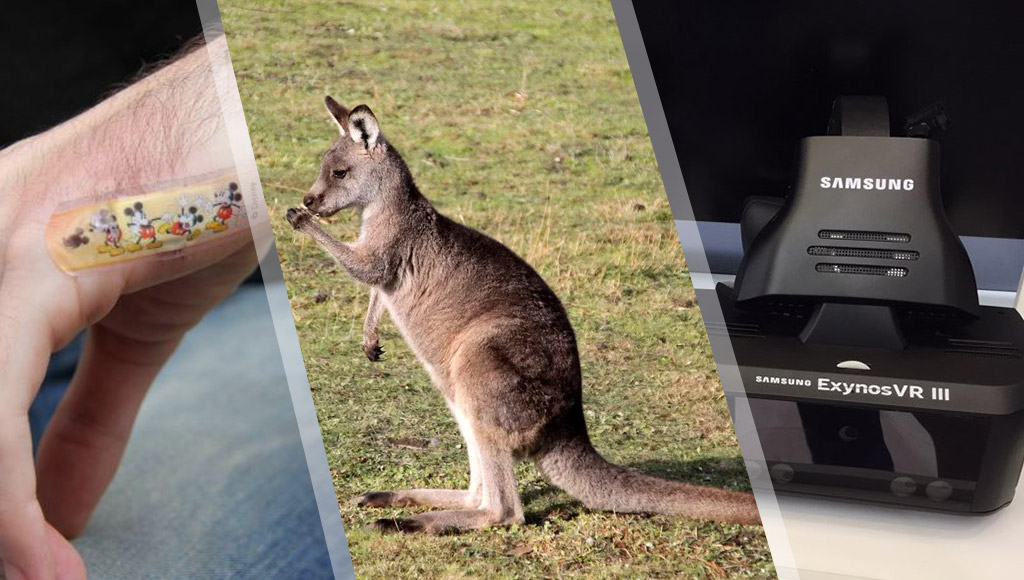 I think this might be the first issue to feature a kangaroo in the image!

Have we properly considered personal space in virtual reality?

Want to make an engaging virtual reality app? There is so much involved in calculating appropriate personal space!

This is exciting! A look at Samsung’s all-in-one VR headset.

The controllers would have “more visceral and accurate hand-tracking”.

It is now easier for devs to record mixed reality videos.

Design a pleasant user experience inside the VR

A well thought out look into designing for VR. Worth a read!

Equal Reality is moving fast, and we want your help to improve diversity with virtual reality

Our friends at Equal Reality are working on reducing unconscious bias using VR and they’re doing incredibly well. They’ve got a mobile VR prototype too!

How to toggle VR mode in Unity-based Cardboard apps.

Here’s a short preview video of these tracking gloves!

Walkin VR is making it easier for people with physical disabilities to use VR.

Google ads are coming to VR at some point, but Engadget say they might not be as grating as you think.

Thermoreal lets you feel heat, cold and even pain in VR and AR

Yep. The one thing we’ve been asking for is to feel pain in VR. Thanks.

More of a glimpse into Apple’s plans for their AR future.

These AR glasses are looking for crowdfunding from devs who want AR glasses that don’t look as bulky or obvious.

The power of AR!

We spoke about insertables with Kayla Heffernan in May, now this Sydney guy has done some hackery to make his public transport journey easier!

What’s going on with those Android Wear 2.0 notification issues?

If you’ve been having issues seeing some notifications on Android Wear 2.0, it turns out… you’re not the only one!

Fitbit working on Charge 3 and Blaze 2 trackers for 2018

The company isn’t pulling everything to its smartwatch, which I’d say is a good thing. Its other trackers are still being improved.

How much sleep do Fitbit users really get? A new study finds out

Always interesting to see studies that use connected devices like Fitbits!

Heart rate variability: why we are glad to see Fitbit and Garmin embrace it

If you’re working on wearables for health, consider measuring heart rate variability too, rather than just the typical heart rate monitoring.

Lessons from giving Melissa, a virtual assistant, its own UI interface

Tanay Pant, a friend of Dev Diner, spoke with us about bringing a UI interface to his open-source AI chatbot, Melissa.

An implementation of the Google Assistant API wrapped as an Alexa skill!

Teaching robots to learn about the world through touch

Research published on teaching the Baxter robot about objects through repeated interactions with them.

They’ve found a way to compress their neural networks to occasionally be able to run on a Raspberry Pi. That’s not easy to do!

Instagram unleashes a smart algorithm to blast away nasty comments

Let AI take care of those trolls so we don’t have to. Hooray!

Peeking into those mysterious neural nets is a tough challenge to solve!

By replicating our brain’s 100 trillion synapses, scientists hope to boost the versatility of artificial neural networks.

The reality of automating customer service chat with AI today

Using AI in customer service is a common use case, here are some real world considerations that need to go into implementing such a system.

Volvo, Autoliv and Nvidia are making real steps to get to self-driving cars!

I’m surprised they didn’t already have one?

A great look at microcontroller boards and single-board computers.

How to make your own smart speaker

Seeing as everyone else is making a smart speaker, why not you too? Right?

Manage a fleet of drones

Controlling a fleet of drones using NodeJS, Raspberry Pi, AWS IoT and Amazon Alexa! (Thanks Malcolm for this link!)

Looks like you can start pairing with Bluetooth devices even sooner!

I assume this was on purpose.

Android Things developer preview 4.1 is out, with improvements to Play services and more

It’s a small update but useful to know for anyone working with this!

Got questions on emerging tech? Feel free to DM me on Twitter, Snapchat me (devdiner) or just send me an email and ask! That’s what Dev Diner is here for 🙂